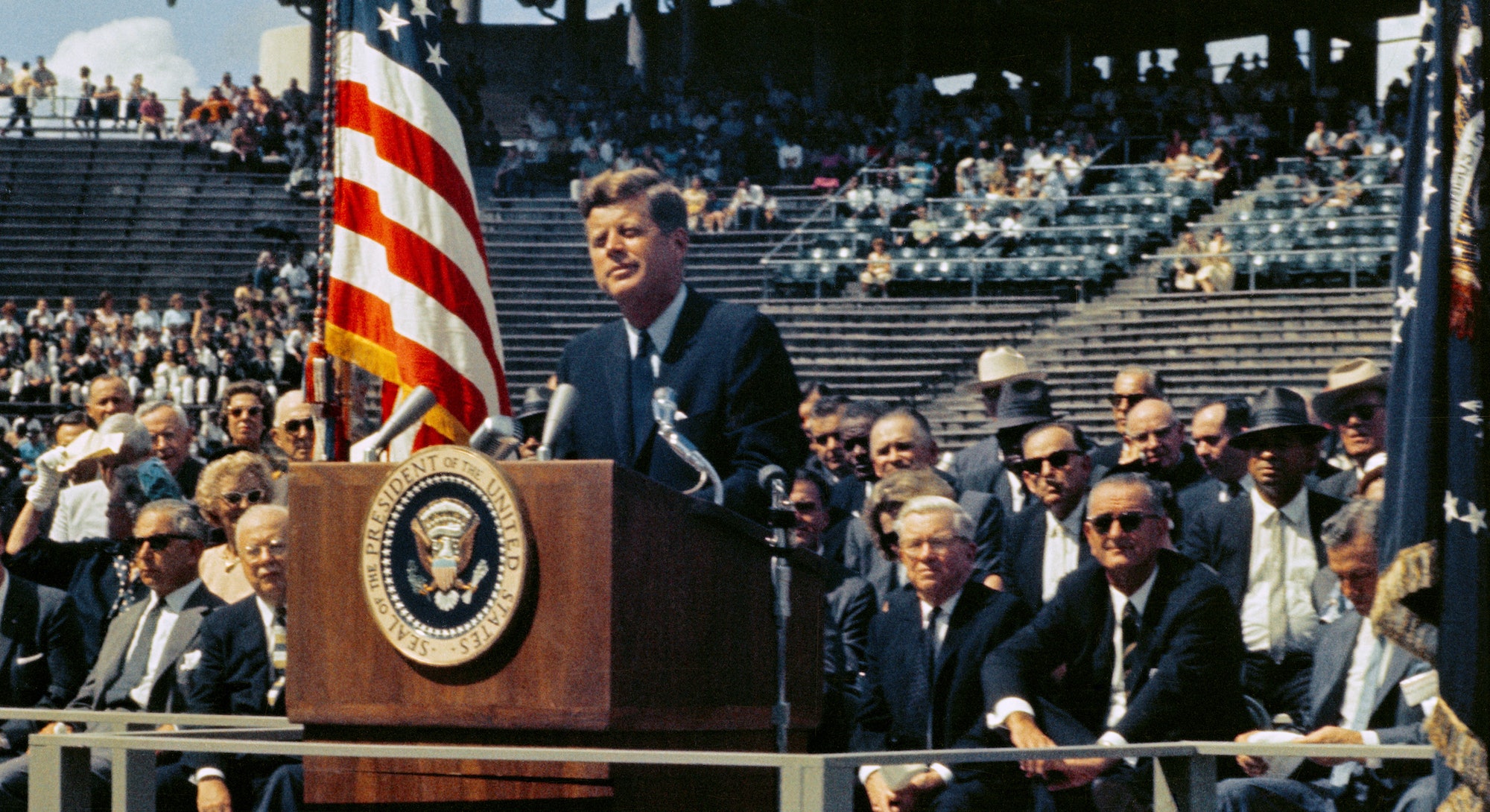 Just a few words from a John F. Kennedy speech at Rice University on September 12, 1962, left a mark on history that reverberates the spirit of the American Dream into the last frontier — space — even 60 years later.

This speech inspired the nation, drawing the public’s interest and support towards space exploration, a necessary step in garnering budgetary support to complete the Apollo Mission.

How Apollo came to be

On May 25, 1961, JFK announced to a special joint session of Congress that he envisaged that the United States would be able to send a man to the Moon before the end of the decade. During the Cold War era, the palpable competition between the US and the USSR was in some ways manifested by advancements in space exploration: the Space Race.

Just four years before, on October 4, 1957, the USSR successfully launched Sputnik, the world’s first artificial satellite to orbit Earth successfully. Then, on April 12, 1961, the USSR sent Yuri Gagarin, aboard Vostok 1, into orbit and returned him safely to Earth, making him the first man in space. The recent failure of the Bay of Pigs invasion didn’t help to promote America’s international reputation either.

Kennedy consulted with Vice President Lyndon B. Johnson, who was also the chairman of the National Aeronautics and Space Council, and James E. Webb, the new administrator at NASA, to identify how America could reestablish its global preeminence through space exploration; the conclusion was to safely put a man on the Moon, which became the directive of the Apollo Program, which had been established during the Eisenhower administration.

It appeared the goal to take man to the Moon would cost billions of dollars, and the idea of prioritizing this kind of initiative did not initially hold strong esteem with the American public. A Gallup Poll from June 2, 1961, showed strong opposition to JFK’s goals: a whopping 58 percent of the public opposed spending billions of dollars on sending astronauts to the Moon.

The Space Task Group, headed by Robert Gilruth, was a group of NASA engineers who managed man’s missions to space. Despite the public opposition, it became clear that the lofty new national directives in space exploration would require larger resources, and the Kennedy administration plowed ahead.

The new Manned Space Center, headed by Gilruth, would build the spacecraft suitable to send astronauts to the Moon. The Humble Oil Company donated a significant portion of land through Rice University to the cause, which resulted in the creation of the famed Johnson Space Center in Houston. This was just the beginning of NASA’s expansion.

How Kennedy’s Moon speech was written

John Logsdon, author of John F. Kennedy and the Race to the Moon, Founder and former Director of the Space Policy Institute at George Washington University, member of the Columbia Accident Investigation Board, and former member of the NASA Advisory Council, had some unexpected insights about the ingredients that went into this historical speech.

Kennedy was first exposed to the Apollo program’s budget in the summer of 1961.

“In 1962, he initiated a fairly comprehensive review of the program, which told him that if NASA was going to make the end of the decade deadline, the next budget had to be pretty dramatically increased,” Logsdon tells Inverse. “The fiscal ‘63 budget, that was a real down payment on a commitment. It was the second budget after his announcement that we were going to do this.”

Logsdon shared that at the end of the fiscal review, in August 1962, Kennedy’s advisor, Kenneth O’Donnell, suggested he tour NASA’s work on the Apollo program.

“In September of ‘62, he [Kennedy] took an inspection tour of the preparations being made for Apollo,” explains Logsdon. “He went first to Huntsville and saw the big F1 engine that was going to be used for Saturn V, saw a test firing of smaller engines; he went to what was still called the Launch Operations Center at Cape Canaveral [now called Kennedy Space Center] to begin to get a sense of what it was since they had just bought the property for the Apollo launch pad.”

“So, there wasn't much there. But, he went and saw the people and the place where the launch facilities were going to be,” Lodgson adds. “Then that next evening, he flew to Houston, and his first activity in Houston the next morning was the speech at Rice University. So, it was intended all along, as part of is the public part of this inspection tour.”

Tucked away toward the end of the speech, the budgetary motivation behind this rallying speech that promotes the American ideals of hard work and achievement, begins to permeate, “Space expenditures will soon rise some more, from 40 cents per person per week to more than 50 cents a week for every man, woman, and child in the United States, for we have given this program a high national priority — even though I realize that this is in some measure an act of faith and vision, for we do not now know what benefits await us.” He compares these costs with those of cigarettes — cigarettes were still more expensive.

The significant budgetary changes to support NASA’s mission required some buttering up on Kennedy’s part, and as such, it required significant contributors. Logsdon outlines the extent of input that went into the speech. This included a draft of the speech written by NASA and revised by the State Department before going to USAA’s Tom Sorenson — brother of Kennedy speechwriter and advisor Ted Sorenson — for input and then moving along to the Bureau of the Budget, before coming to the Kennedy administration.

Ted Sorenson, Kennedy’s famed speech writer, was not the source of the famous phrase “we do this not because it is easy, but because it is hard.” Logsdon shared that this came from NASA, whose drafting, as Logsdon characterized it, “was much more flat prose.”

Logsdon shared NASA’s original wording, “we chose to go to the Moon in this decade, not because it will be easy, but because it will be hard. It will bring out the best in us.” He compared this directly with the final product that is undeniably more captivating, “We choose to go to the Moon in this decade and do the other things, not because they are easy, but because they are hard, because that goal will serve to organize and measure the best of our energies and skills, because that challenge is one that we are willing to accept, one we are unwilling to postpone, and one which we intend to win, and the others, too.”

The speech ultimately acted as one step in the path of getting Apollo 11 to the Moon in 1969. However, contextually, there was still opposition throughout the decade — individuals and human rights groups were concerned that the government would rather spend their tax dollars sending a man to the Moon than feed starving families on its home turf.

“The memo that recommended to Kennedy, setting a lunar landing is a national goal, said it is man, not really machines, that capture the imagination of the world. And I think that’s still true,” Lodgson says.

NASA is now on the periphery of a return to the Moon. There’s less of a presidential mandate than Kennedy’s speech, but 50 years later, the first step is within grasp, though the travails of Artemis in getting off the ground proves that it is still hard. But we wouldn’t be at this moment without the fateful speech delivered those years ago.