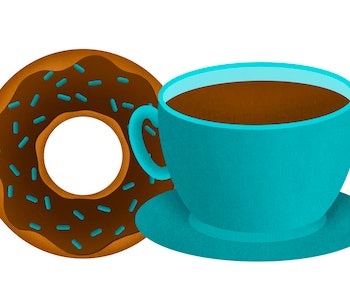 It's a vicious cycle: Stay up late into the night and revive yourself upon waking with a cup of strong coffee. While the caffeine may perk you up, it could also have a negative effect on your metabolism, new research suggests.

According to the new study, published in the journal British Journal of Nutrition, a single bad night's sleep isn't likely to acutely impair metabolism. Having coffee before breakfast the next day can.

In the experiment, participants who drank strong, black coffee after a disrupted night's sleep, and followed that up with a sugary drink had impaired blood sugar control — a marker for metabolic dysfunction.‌‌

"It may be better to wait until after breakfast to have coffee following a bad night of sleep — rather than before breakfast in order to balance the stimulating effects of the coffee with their potential to disrupt glucose metabolism," study co-author Harry Smith, a researcher at the Centre for Nutrition, Exercise & Metabolism at the University of Bath, tells Inverse.

Moderate coffee drinking is linked to health benefits like lower risk of heart disease, certain cancers, and neurological conditions, so the findings "don’t mean that coffee can’t be part of a healthy balanced lifestyle," Smith adds.

What the research does say is that it may be worth considering when to down your java.

At the start of the study, researchers measured participants' height, weight, and waist circumference along with health metrics like sleep quality, mood, and appetite. After completing each condition, researchers took samples of the participants' blood after drinking the sugary drink. The drink was designed to mirror the calories of a typical breakfast.

The health impacts of a cup of joe — The scientists found that one night of broken sleep did not affect people's insulin sensitivity or glucose tolerance —two markers of metabolic health — the next day, compared to a full night of sleep.

The study may be reassuring for those who occasionally miss out on their full eight hours of rest. But those who regularly lose out on snoozing time aren't out of the woods, metabolically speaking.

The results may throw a wrench in the morning routines of avid coffee drinkers.

In the study, consuming strong, black coffee after broken sleep substantially increased the blood glucose response to breakfast by around 50 percent. This shift doesn't necessarily put someone at risk for diabetes or other metabolic disorders, but the scientists say it could influence health if the spike occurs habitually.

"Single occasions of elevated blood glucose responses such as in the study can be predictive of cardiometabolic events in the future, and this response repeated over a long period of time certainly could have an impact on health such as reduced insulin sensitivity," Smith explains. Still, other factors such as physical activity need to be considered when predicting long-term outcomes.

Shifting coffee routines — Taken together, these findings suggest drinking coffee after a bad night's sleep can make you feel alert, but may limit your body's ability to tolerate the sugar in your breakfast.

"If this scenario of caffeinated coffee before breakfast is continued over a prolonged period it is possible that this may have longer-term health implications, however, it is also likely that our body clock may adjust to the morning spike in blood glucose," Smith says.

More, larger randomized clinical trials are needed to hammer out exactly how coffee routines impact daily metabolic function. But for now, these findings suggest people should consume their bean juice after breakfast, not before, to support a healthy metabolism.

"We know that nearly half of us will wake in the morning and, before doing anything else, drink coffee - intuitively the more tired we feel, the stronger the coffee," study co-author James Betts, co-director of the Centre for Nutrition, Exercise and Metabolism at the University of Bath, said in a related statement. "This study is important and has far-reaching health implications as up until now we have had limited knowledge about what this is doing to our bodies, in particular for our metabolic and blood sugar control."

Coffee is the world's most popular beverage, so drinking morning coffee at the perfect time is useful information for billions of individuals.

"Put simply, our blood sugar control is impaired when the first thing our bodies come into contact with is coffee especially after a night of disrupted sleep. We might improve this by eating first and then drinking coffee later if we feel we still feel we need it. Knowing this can have important health benefits for us all."

LONGEVITY HACKS is a series on the science-backed strategies to live better, healthier, and longer.

HOW THIS AFFECTS LONGEVITY — People who drank strong black coffee before breakfast after a bad night's sleep had impaired metabolism and blood glucose tolerance. Scientists aren't sure what this coffee drinking habit would lead to over time but say there could be negative long term effects.

WHY IT'S A HACK — Other studies show coffee can help protect the heart and promote longevity. But this study suggests when you have it can be a crucial factor to avoid unintended effects on metabolism.

SCIENCE IN ACTION — Scientists suggest drinking coffee after breakfast, not before, to support a healthy metabolism.