The evolutionary reason all your friends made babies during the pandemic 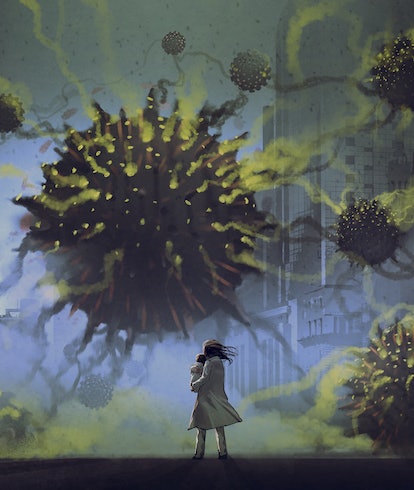 “The pandemic really made me choose what I want, instead of what fits with what people expect.”

Eileen Cotter Wright and her husband went back and forth about whether to have a child for years.

A prolific travel blogger who visited at least a dozen countries a year, Wright felt most in her element exploring new places. Swapping it all for parenthood seemed like climbing El Capitan without a harness.

Everything changed last February. As the trickle of reports about Covid-19 became a deluge, Wright and her husband sat down to talk about what was happening.

“We had a really distinct conversation,” she says, “like, ‘Is this gonna be a thing for a while?’” The familiar what-about-a-baby topic resurfaced — and both of them realized they actually felt more comfortable with the idea than they ever had before. It felt scary to try for a child in the face of a pandemic, but after they made a choice, they didn’t wait around.

Soon after this monumental decision, Wright’s office shut down as the coronavirus raged. She headed home in a daze. Then her life really turned upside down.

One year into the pandemic, Inverse is investigating how quarantine changed every facet of our lives, from video games to food to life-changing decisions.

As it turned out, Wright had plenty of company: In the three months after the first lockdown began, Google searches for “pregnancy test” initially dipped and then ticked up to slightly above expected levels in the U.S. and Europe, according to a recent study published in the journal PLOS One.

As Covid-19 careened around the globe, sowing death and destruction, it also plunged millions into psychological — and physical — limbo. Torn from livelihoods and the routines which once gave life its structure, many found themselves starting over in all kinds of ways. The absence of larger certainty seemed to spur them toward decisiveness: Some expanded their families, others made risky career choices, and some committed full-tilt to off-the-cuff creative ventures. Others blew their commitments up: The same study, which identified a modest increase in pregnancy test-related Google searches, also found searches related to breakups and divorces rose by 13 percent post-lockdown in the U.S.

The effect of these shifts, both physical and psychological in nature, can linger long after the black-swan event that set them into motion.

Rutgers University neuroscientist Tracey Shors tells Inverse that these profound transformations are in some ways hard-wired into our biology. They emerge in part from a stress-fueled sequence of structural brain changes.

“Something like this can really change how you feel about yourself and your life,” Shors says. “The way that the brain produces thoughts and memories and feelings is changed.”

Cataclysmic events, and the cascade of stress hormones they elicit, reshape the brain on a cellular level. Under stressful conditions, the body’s adrenal glands churn out a different mix of hormones than they normally would. The heaviest hitter, cortisol, starts circulating at high levels, altering almost every cell in the body. Chronically high levels of cortisol take a toll on learning and memory, but Shors’ research shows that acutely stressful conditions can actually increase the density of dendritic spines on some neurons. These spines are involved in brain-cell communication and are thought to facilitate learning.

In the short term, stress-induced cortisol release may prime people to make more daring decisions. When researchers at Clemson University immersed study participants’ hands in a vat of ice-cold water to provoke a physical stress response, they had more cortisol in their saliva than control participants — and they were more likely to make bold, high-stakes decisions that promised long-term rewards.

“Either you adapt, or everything you work for dies.”

Nicholas Domingo knows this from experience. The stress of losing his livelihood due to the pandemic was what motivated Domingo to reinvent his business overnight. Before coronavirus, Domingo played a superhero named Captain Encouragement at school assemblies in California, teaching kids how to resolve conflicts and stand up to bullies. But as Covid-19 lockdown descended, Domingo’s income source disappeared almost immediately.

At what could have been a career nadir, Domingo instead made a warp-speed pivot. He had very little experience with video editing, but he decided to start his own production company to make TV shows starring Captain Encouragement. He converted his house into a green-screen studio for filming, but the learning curve, he soon found, was incredibly steep. “I contacted some friends who work in the film industry. The first few videos, they said, ‘What are you sending me?’”

After weeks of intense shooting, things started to click — and people started to respond. A children’s streaming service put Captain Encouragement episodes on its platform, and public access TV stations around the U.S. added episodes to the schedule. Domingo is thrilled he can reach many more kids than before as a result. But flashing back to one year ago, he says, the wholesale reinvention of his business didn’t seem like a bold move — it seemed like the only move.

“The risk didn't even matter. Either you adapt, or everything you work for dies,” he says.

Michele Benoit likes to think of herself as a helper. Since she was very young, Benoit pictured herself guiding others to their ideal path. In the real world, she’d gravitated toward marketing, which promised a steady income. But her job “felt like a treadmill,” she says. “I didn’t really feel rewarded.”

After the pandemic hit, Benoit started working from home. “When you’re in your space, there’s not a lot of room to hide,” she says.

It’s not just adapt-or-die situations that prompt crisis u-turns. Periods of deep reflection can also kindle positive change, as people consider what they truly want given the absence of everyday pressures — and the loss of once-assumed certainties. In this way, individual or collective trauma “can be the springboard for people to re-evaluate their lives,” writes University of Nottingham psychologist Steven Joseph in Psychology Today.

“Some people were like, ‘Wow, I never really took the time to just be alone with my own thoughts, not being so dependent on always having to interact and be on the move.’”

Practices that increase self-awareness, such as contemplation and meditation, can boost the brain’s adaptability and perceptive powers, setting the stage for shrewder decision-making.

In solitude, Benoit finally acknowledged to herself that she was getting little satisfaction out of what she was doing.

“It just hit me at a certain point, ‘Who are you doing this for? And what are you working for?’”

Benoit’s realization was sobering but also motivating. “I thought, ‘What would I do for free?’” She’d long enjoyed her role as confidant and counselor to friends and family, so she decided to turn it into a career, pursuing certification as a life and business coach. She now has a handful of coaching clients and plans to keep growing her business.

“I think the pandemic really made me choose what I want,” she says, “instead of what fits with what people expect.”

“It’s about actually doing it, showing up, and putting in the work.”

Fresh from a clarifying stint in rehab, David Thomas was similarly inspired to take a blank-slate approach in 2020. Thomas had planned to work his way up in the stand-up comic ranks by securing stage time on the club circuit around Washington D.C. But as Covid-19 loomed, he scrapped that plan.

The work he’d done in rehab had fueled Thomas’ drive to seek new directions, so he created a YouTube and Twitch show called Quarantine Action Wrestling, featuring a diverse roster of comedians who each take on a pro-wrestler alter ego.

“I was really excited to see how I could go about being creative with a sober mind,” he says. “It was just that eagerness, like, ‘What can I do now?’”

Not everyone manages to use cataclysmic events as springboards for reinvention. There’s a hefty dose of privilege involved — it’s a lot easier to take a moment of apparent crisis to reevaluate your life and make a major change when you’re working from home and have financial security, say, than when you’re stocking store shelves on the pandemic front lines.

Cognitive flexibility can also help to predict whether a crisis will send you hurtling in a fruitful new direction or down a rabbit hole. In a Complutense University of Madrid study, people who believed in life’s fundamental goodness and who had an open attitude toward their futures were more likely to experience personal growth during the Covid-19 pandemic than those who were more closed-minded.

Cultivating a hopeful, open attitude starts with deciding to focus on the possibilities that still exist — and having the willingness to pursue them.

“It’s about actually doing it, showing up, and putting in the work,” Shors says. Those meaningful actions, in turn, change your brain in ways that may embolden you to take the next step — and the next.

Committing to this kind of mindset isn’t a one-time decision but a long-term, dynamic process. After Eileen Cotter Wright found out she was pregnant, her life became a crash course in how to navigate Covid-19-related challenges, including heading safely to the medical clinic for monitoring once she found out her pregnancy was high-risk.

Wright’s daughter, Rory, was born last November, and today — as Rory coos in the background — Wright says she’s confident she made the right decision.

"I'm glad we didn't put it off. I think there were more positives than negatives.”

Chief among them was her recognition that fulfilling journeys could proceed from chaotic beginnings. “It’s never going to be perfect. We’re not guaranteed anything,” Wright says. “My husband's working from home, and he's had so much time with her, which has been great. She’s so fun. We’re lucky.”