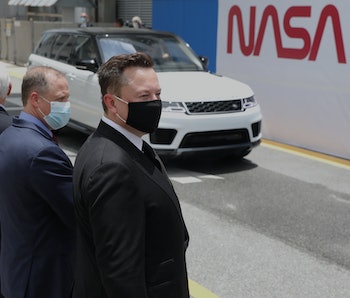 It’s a diverse set of four stories today for your brain. We have context around why SpaceX is being awarded more NASA contracts. We have the latest entry in our countdown of the year’s most WTF science stories. We have another reason to stop vaping, as if you needed one! Finally, we have everything you want to know about an incredible-looking electrical vehicle, the Polestar 3.

I’m Nick Lucchesi, editor-in-chief at Inverse, and this is Inverse Daily (Taylor’s version).

This is an adapted version of the Inverse Daily newsletter for Monday, December 13, 2021. Subscribe for free and earn rewards for reading every day in your inbox. ✉️

Only SpaceX can meet one critical bar for NASA

Although SpaceX’s future — including the chance of bankruptcy — remains unclear (as far as the public knows), the company will keep trucking along.

In addition to Musk’s announcement that SpaceX is continuing to prepare for Starship’s (possible January) orbital launch, New York Times space reporter, Joey Roulette, shared on Twitter that NASA “plans to award SpaceX three additional commercial crew flights to the ISS under the company's CCtCap contract,” primarily due to interim issues with the Boeing Starliner.

“After a thorough review of the near-term certified capabilities and responses from American industry,” NASA writes in a December 3 blog, “NASA’s assessment is that the SpaceX crew transportation system is the only one certified to meet NASA’s safety requirements to transport crew to the space station.”

And Musk is thrilled.

Vaping nicotine is less terrible than smoking for your health, but it’s not without its own potentially harmful health consequences — including a rather intimate aspect of male well-being.

In a recent study published in the American Journal of Preventative Medicine, researchers reveal daily nicotine vapers are more than twice as likely to report having erectile dysfunction as people who never used e-cigarettes.

Erectile dysfunction is one of the myriad health problems caused by smoking. Cigarette chemicals damage blood vessels, affecting blood flow — and you need good blood flow to sustain an erection. Because nicotine and other additives are also in e-cigarettes, Omar El-Shahawy, Assistant Professor at NYU’s Grossman School of Medicine and lead researcher on the study, and his colleagues wanted to know if the relationship between e-cigarette use and ED would be similarly strong.

Do men need to wait for “round two?”

There are many great mysteries of science: How did life begin? Is the universe infinite? Why does the male of our species need a rest period after ejaculation before round two?

This third question may not seem as profound as it does profane, but it does indeed baffle scientists.

Everything you want to know about the Polestar 3

Polestar is one of my favorite electric car makers. It’s kind of a spinoff from Volvo, sharing a corporate parent and taking the Swedish firm’s lead designer as its CEO, as well as Volvo’s overall design ethos. Two vehicles have been released so far, Polestar 1 and Polestar 2, both of which I really liked when I drove them.

Next up is the Polestar 3, an “aerodynamic electric performance SUV” that could be one of the most exciting electric vehicles to come out in a year chock full of exciting EVs. One of the more interesting things about the 3 is that it will be manufactured at Volvo’s existing assembly facility in Ridgeville, South Carolina.