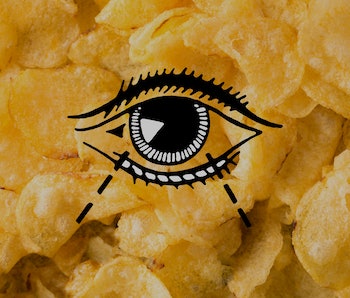 When famine or conflict strike and food is scarce, people can lose sight and hearing abilities due to missing nutrients. But as Inverse reported in September 2019, a 17-year-old boy in England went blind despite suffering neither of those things — in this case, food was anything but scarce.

As a result of a lifetime of eating Pringles, fries, sausages and white bread, the young man lost his vision and had worsened hearing, according to a case report published at the time in the Annals of Internal Medicine. The name for his condition is nutritional optic neuropathy — a rare and devastating condition isn’t typically seen in places with abundant food.

The teenager’s scary health issues shine a light on the way food can help or hurt our sight, the report authors said. They also underscore the importance of eating a diverse, healthy diet.

“Eye specialists are well aware of the link between vision and nutrition but awareness among other health professionals is not as good,” report co-author Denize Atan of the Bristol Eye Hospital, told Inverse in September.

“Hopefully this case report will mean fewer cases are missed or the diagnosis delayed.”

The teenager’s first diet-related symptoms appeared at age 14, when he went to the doctor reporting fatigue. The next year, he developed hearing loss, then vision issues. At 17, after two years of progressive vision loss, his sight got so bad that he became severely sight-impaired. If he had lived in the United States, he would be classified as “legally blind.”

“The patient confessed that, since elementary school, he would not eat certain textures of food. He had a daily portion of fries from the local fish and chip shop and snacked on Pringles (Kellogg), white bread, processed ham slices, and sausage,” the case report read.

Luckily, if the condition is caught early, treatment can stabilize, and even reverse, vision loss. Unfortunately in this case, the diagnosis came too late.

“Purely dietary causes are uncommon but not unheard of,” Atan explained. “This case was unusual because it was caught late when the potential for recovery with treatment is limited.”

The lesson from all of this: Eat your vegetables. No, really.

As 2019 draws to a close, Inverse is counting down the 25 stories from this year that made us say “WTF.” Some are incredible, some are icky, and some are just plain strange. This is #6. Read the original article here.

More like this
Mind and Body
Jan. 23, 2023
Can spicy food boost our gut health? Here's what the science says
By Katie MacBride
Mind and Body
Jan. 21, 2023
Do detox diets work? A dietician breaks down the murky science
By The Conversation and Taylor Grasso
Science
Jan. 21, 2023
Can spicy foods cure colds? A neuroscientist reveals the encouraging truth
By Elana Spivack
LEARN SOMETHING NEW EVERY DAY.
Related Tags
Share: