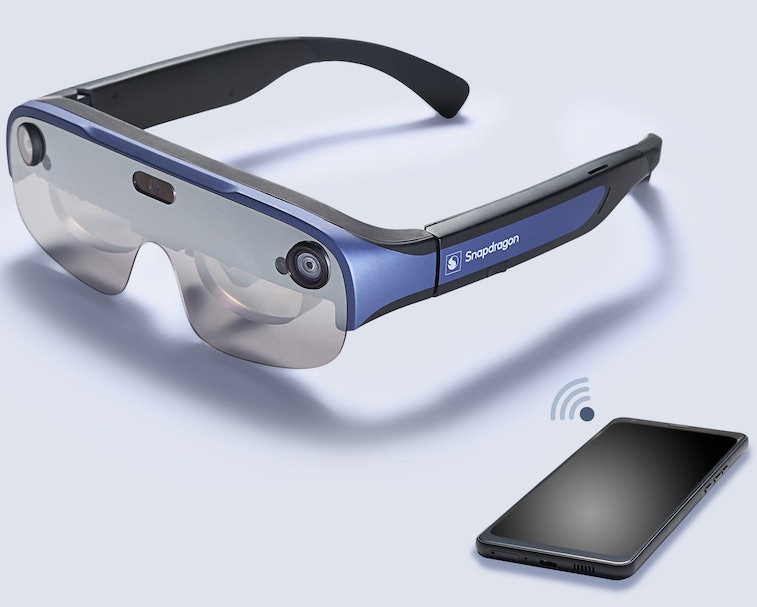 Along with its new Snapdragon 8+ Gen 1 and Snapdragon 7 Gen 1 mobile chips, Qualcomm is also introducing an updated wireless augmented reality glasses concept that could be an important stepping stone between the hinky wired AR devices of 2022, and whatever AR glasses are waiting at the end of the decade (assuming Meta, Google, and Apple don’t give up).

No wires — Qualcomm’s big idea for wireless AR glasses is using more mobile chips (perhaps unsurprisingly). The concept design places a Snapdragon XR2 in the glasses and a Snapdragon chip in your companion Android phone, with the complex computing tasks of rendering an AR experience split between the two.

In Qualcomm’s example, data from hand and eye-tracking is collected and processed on the XR2 in the glasses, wirelessly transferred to an Android phone running an AR app, which then sends compressed rendered frames back to the glasses for you to view in AR. The whole system requires Qualcomm’s FastConnect technology to work properly (basically a package of Wi-Fi 6E and Bluetooth) but naturally that comes built-in on new Snapdragon chips.

Limited, for now — The reference design Qualcomm made is closer to the wired Nreal Light headsets being sold at Verizon than anything like Microsoft’s HoloLens or the Magic Leap 1. The big difference is the optics. Rather than use an expensive waveguide setup like Magic Leap, Qualcomm’s AR effect is created by dual 1,920 x 1,080 90Hz micro-LED displays powered by a small 650 mAh battery, with two black and white cameras for tracking and one RGB camera for streaming video.

Qualcomm estimates that setup would get you around 30 minutes of active use, but battery life varies depending on what your doing and the tweaks companies could make to Qualcomm’s design. When asked, Qualcomm wouldn’t share which of its partners might release glasses based on its concept, only that it would happen.

What’s next — As most major tech company works their way towards releasing some kind of AR product Qualcomm’s concept feels like a meaningful stop in the middle. The company has its chips prominently placed in Android phones and has proved itself capable in virtual reality headsets like the Quest 2.

With some reports suggesting Meta might end up using Qualcomm technology in its first pair of AR glasses, the odds of something like the Wireless AR Smart Viewer being someone’s first exposure to AR glasses seems high.

Stay up to date