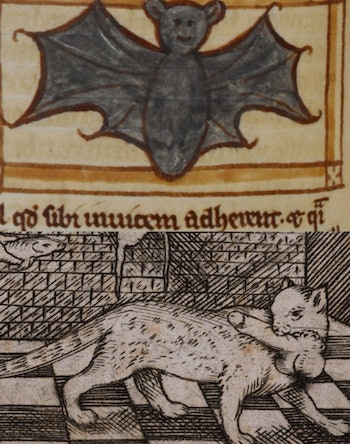 Olivia Swarthout has brought medieval art to the masses (460K Twitter followers and counting) but she’s not formally trained in medieval history or art.

A self-described “proprietress of weird medieval guys,” she shares little 15th-century snail cats, gun-carrying demons, and other oddly charming scenes from centuries-old art along with her not-so-serious modern-day commentary.

Swarthout (who recently asked followers for a fancam of 12th-century polymath Hildegard von Bingen, “for a friend”) is framing medieval art through a meme-y lens, making the Classics palatable and funny: medieval guys — they’re just like us! They examine things. They hug their friends. They hold eggs. They gamble in sunglasses. They eat poultry with pals. They even had ‘this isn’t what it looks like!’ moments, like one post showing a king peeking into a room to see the queen (crown still on) in bed with a dragon, which Swarthout captioned, "really? with the dragon?"

And her genuine passion for medieval history is infectious. Perhaps a doctor dog treating a sick cat is what we need in these trying times.

By day, Olivia Swarthout is a data scientist in London with an interest in environmental topics. But in her free time, she’s the queen of Middle Ages memes, and she spends a few hours a week perusing digital archives to find them. She likes the British Library’s collections because you can search by keyword, but she also uses resources from the Getty Museum in Los Angeles, the Morgan Library in New York, the National Library of France, and a slew of others. “I’ll look through whole manuscripts online and get totally lost in them. There are all these really cool bits of art,” she told me over the phone.

Swarthout, 22, grew up in Montana until her parents packed up and moved to Germany when she was 10, after receiving German citizenship that her Jewish ancestors lost before WW2. She went to Scotland to study statistics at the University of Glasgow, graduating in 2022 with a thesis examining the statistical prevalence of frogs and toads of the U.K. — a natural extension of her long-running fixation on frogs. “There’s something inherently appealing about creatures that are ugly in a charming or cute way. I look at medieval art in the same way.” She speaks English and German and is “thinking about learning Medieval Latin” (of course she is).

She’s maintained similar types of gimmick accounts in the past, but none captured the internet like @WeirdMedieval, which she started in April while sitting in the city of Glasgow’s Mitchell Library deriving equations before her final exams. (“I go there because I love the funky carpets,” she says.)

“There’s something inherently appealing about creatures that are ugly in a charming or cute way.”

“I was looking for an escape from the technical and mathematical work that was piled on me, so I decided to take a break, and I flip through some medieval manuscripts as a mental cleanse. I didn’t have the intention of doing anything with them, but I got lost in the art. I was like, ‘Oh, these people were really funny.’” Like they always say, nothing takes your mind off work like a thousand-year-old painting of a bird with two dozen eyes.

Within four months and a few hundred medieval guys, she’s become one of the internet’s most conspicuous medieval scholars. “It gives me pause when posting to know that the president of Chile, a recent follower, will see this weird medieval guy,” she says. And she was particularly starstruck when the lead singer of the Mountain Goats, her favorite band since high school, professed himself a weird medieval guys fan.

Her identity isn’t exactly a secret, but she’s also not particularly forthcoming online about who she is. She just prefers to focus her content on the medieval guys, though people have long wondered who procures the startling scenes. “I think people expect someone male, in his mid-thirties, who wears a tweed jacket with elbow patches,” Swarthout told me over the phone. Instead, she’s a Tumblr girl. “I was there for the heyday, from like 2012 to 2016, when it was absolutely insane — no adults, no brands, just a bunch of teens bonding over our obsessions to an unhealthy extent. That was a big part of my upbringing and sense of humor,” she says. Her weird medieval guys curation is born of nostalgia for an escapist internet, the “online corners that used to feel more isolated and self-contained.”

Swarthout is adamant that the medieval period isn’t boring. She’s also passionate about boosting middle ages PR. “They weren’t stupid back then!” she says. “There’s a pretty well-established movement among medieval scholars to push back against terms like ‘Dark Ages’ which falsely imply the Middle Ages had less knowledge and study compared to before. After the Middle Ages, there was a big revival of Roman and Greek aesthetics that went along with a trend toward global empires, which came at the expense of the Middle Ages’ reputation.”

Even without sweeping empires, the Middle Ages had impressive art and culture and literacy. And now, a generation centuries younger can appreciate it in a whole new way.

“I didn’t know very much about the Middle Ages before, but collecting pictures of the weird guys as if they’re Pokémon has led me to all the history that’s behind them,” said Anna, a high schooler from California who follows @WeirdMedieval.

Swarthout also sells weird medieval stickers, like a fish with feet or a “mischief radish man,” and says she’s cooking up a few plans that she can’t announce yet. “I’m very excited.”