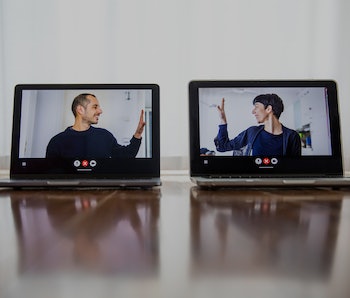 There are a handful of coronavirus “winners,” but no company has come close to matching the sudden success of Zoom. The San Jose, California-based company rose up from obscurity to become the teleconferencing app of the moment, hosting everything from remote business meetings to family gatherings. Hoping to hold onto its newfound dominance, the company has signed a deal to begin used tech standby Oracle Corp’s cloud computing service.

“We recently experienced the most significant growth our business has ever seen, requiring massive increases in our service capacity. We explored multiple platforms, and Oracle Cloud Infrastructure was instrumental in helping us quickly scale our capacity and meet the needs of our new users,” said Zoom CEO Eric S. Yuan in a joint press statement. “We chose Oracle Cloud Infrastructure because of its industry-leading security, outstanding performance, and unmatched level of support.”

Founded in 1977, Oracle has one of the tech industry’s longest pedigrees. It’s a sharp contract with Zoom, which was founded in 2013. The newer company has been successful in its nine years of existence, but worked in fields that often escaped the public’s eye, like business-to-business deals and telemedicine.

That all changed as the novel coronavirus pandemic caused massive shutdowns through every sector of society. Suddenly, Zoom wasn’t just a solution for telemedicine or conferences: it was a solution for the whole planet. On April 22nd, Zoom announced that it was seeing 300 million Zoom meeting participants every day.

Most companies don’t find themselves rising to the level of public utility within a matter of months, and Zoom hasn’t handled the transition flawlessly. Weak security has resulted in harassment through Zoombombing, and complaints about the limits of its 40-minute free meeting period abound.

But the surge has stuck, and Zoom is doing its best to keep up. It has removed its 40-minute limit for K-12 schools, which is surely helpful for schools across the country and also a massive increase in bandwidth. Hence, the partnership with Oracle.

“Video communications has become an essential part of our professional and personal lives, and Zoom has led this industry’s innovation,” said Oracle CEO Safra Catz in the joint press statement. “We are proud to work with Zoom, as both their cloud infrastructure provider and as a customer, while they grow and continue to connect businesses, people and governments around the world.”

In expanding its cloud capabilities, Zoom has very much been the belle of the ball: Oracle’s newsroom headline announcing the partnership is proudly titled “Why Zoom chose Oracle.”

But any of today’s major tech players—Apple, Google, Microsoft, Facebook—can all fondly reminisce on the time that they were the hottest entity in Silicon Valley. And not only have waves of negative publicity hit each of those companies, but several are eyeing Zoom as the latest competition to services like Google Hangouts or Skype. And they’re not alone: a number of emerging companies, like GoToMeeting, BlueJeans, Cisco Jabber, Whereby, not to mention the open-source Jitsi, are all offering similar experiences. If Zoom wants to maintain its status as the quarantine default, don’t expect this to be its last deal.

The Inverse Analysis— If all goes according to plan, Zoom users will likely not even notice the new deal with Oracle. Their calls will just be smoother and more consistent. And then, Zoom hopes, they’ll stick around after the pandemic passes.