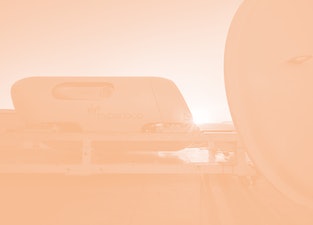 Virgin Hyperloop co-founder explains why the first ride was so ... slow

Virgin Hyperloop intends to send pods rushing through a low-pressure tube at 670 miles per hour — but its first passenger test fell short of that.

While speed is impressive, Josh Giegel, a cofounder of the company that became Virgin Hyperloop, tells Inverse that safety is more important in these early days of this new technology proposed by SpaceX founder Elon Musk back in 2013.

In an Inverse interview, shared in Wednesday's Musk Reads+ newsletter, Giegel explains that the test was more about proving the firm is serious and taking the right steps forward.

Want to know more about Giegel's historic trip, what the future holds for hyperloop, and when you'll get to take a ride? Don't miss the full interview, available only in Musk Reads+.

Giegel's comments came just after his historic hyperloop trip. The co-founder joined Sara Luchian, another company leader, on a trip that lasted a mere 15 seconds. The pair sat in the specially-designed XP-2 pod, placed inside the 500-meter (1,640 feet) "DevLoop" test track in the Nevada desert.

The pod accelerated for six seconds to reach 107 mph. Luchian told Inverse that it felt like "flooring the gas on a high-end, performance sports car.” The acceleration rate was around three times as fast as Virgin Hyperloop expects to use for public passenger pods.

While it was a momentous moment for hyperloop, others questioned the relatively slow pace. Musk's original hyperloop white paper, which outlined the idea, claimed the pods could travel at 760 mph.

Virgin Hyperloop expects the top speed for the passenger or light cargo pods to reach that 670 figure. The Times reported that the pod's 107-mph speed was slower than the 140 mph top speed on some of the United Kingdom's traditional rail lines.

In this week's interview, Giegel explained that these small steps can help enable the giant leaps. He compared it to the space race:

Separately, Musk is working on his own system of tunnel transportation called the Boring Company, but high-speed pods have been replaced by Teslas in early tests. SpaceX does still host a hyperloop competition for college students, seemingly relying a competitive atmosphere to generate the best hyperloop tech.

Hyperloop teams have managed to reach speeds of up to 288 mph without any passengers. The main difficulty these teams face with reaching higher speeds is distance: TUM Hyperloop told Inverse in August 2019 that it would take around nine miles of track to reach those top speeds.

With SpaceX planning to build a six-mile test track for future competitions, it may not be long before the record is broken. But for Giegel and the team, it seems the main focus is demonstrating that it can ferry passengers safely.

To continue reading the full interview, subscribe to Musk Reads+.

As a token of gratitude to our loyal readers, we’re excited to offer a limited-time discounted rate of 50% OFF to early subscribers. That means you’ll pay just $60 per year if you sign up before December 31, 2020.

Here is what you will gain from subscribing to Musk Reads+:

Musk Reads+ is a fully independent operation. We are not Elon Musk, nor are we employed by him. Our job is to report the events we find newsworthy, giving you the inside look at the worlds of space rockets, electric cars, clean energy, and more. It means first-hand accounts of a SpaceX rocket launch, Tesla insights from third-party analysts, and more.

More like this
Innovation
8.12.2022 10:30 AM
Will Miami exist in 2050? 4 strategies could keep U.S. coastal cities afloat
By James Gaines
Innovation
8.8.2022 10:00 AM
A wild new plane-train hybrid could whoosh you to your destination — if it can get off the ground
By Molly Glick
Innovation
8.17.2022 6:15 PM
Can we terraform Mars? Scientists may have made a major breakthrough
By Jeff Nagle
Related Tags
Share: