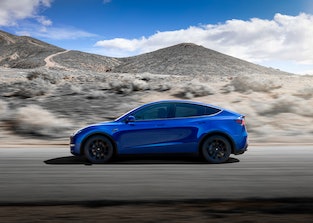 The Tesla Model Y could turn up the heat to keep its wheels rolling.

The company's latest all-electric vehicle, which started shipping this month, comes with an unexpected heat pump. The new feature, discovered in the manual by Roadshow Monday, will help move heat from hot areas of the car to other, cooler parts. It's the first time such a feature has ever appeared in a Tesla vehicle in 12 years of car production.

It could prove a welcome boost, particularly in winter months as temperatures drop. Electric vehicles are particularly susceptible to cold weather: a 2015 study by Teslarati found that range in a Model S sedan could drop by up to 25 percent. A February 2019 Consumer Reports study placed that figure even higher: the Tesla Model 3 reached nearly half its advertised range, while the Nissan Leaf lost more than half its range.

Electric cars' range drops for two main reasons. The first is the electrolytes in the battery don't fare well under cold temperatures, preferring to be around 60 to 80 degrees Fahrenheit. When the temperature drops too much, it works slower. The second reason is more straightforward: when it's cold, occupants tend to turn up the heat. That places extra energy demands on the vehicle, and it can't depend on a hot engine to act as a heat source.

The heat pump could help mitigate this. Tesla's manual explains it forms part of the heating, ventilation, and air conditioning system, also known as the HVAC. It's unclear where Tesla's pump sources its heat, but the manual places the pump near the front motor.

The Model Y can already run for an impressive number of miles. The $46,690 Long Range model can run for 316 miles. The $56,690 Performance model runs for 315 miles, but this figure drops to 280 miles if a buyer adds the performance upgrades package. A $39,000 Standard Range model, announced at the initial event in March 2019, will travel 230 miles. Production on this version is set to start in early 2021.

But Tesla has been aiming to boost its battery ranges even further. The Model S, a premium-priced sedan, is nearing 400 miles of range in its most expensive configuration. The Cybertruck, set to hit roads in late 2021, will reach over 500 miles in its high-end configuration. The second-generation Roadster is also set to reach over 600 miles when it launches.

It's not the first time Tesla has made heating tweaks to squeeze more energy out of the battery. When it unveiled the third-generation superchargers in March 2019, it was accompanied by an update that would pre-emptively heat the battery as it approached a charging point. The company claims this can reduce charging times by up to 50 percent.

It's unclear how much range Tesla's tweaks may add to the range, but it could take a while before they're reflected in the company's marketing literature. In third-party testing, the Model 3 was able to reach 350 miles on a single charge even though the car is sold as having 310 miles of range. The Model S and X, which have gradually increased their range over time, updated their software to reflect new EPA-approved ranges in March.

Tesla is battling the cold with these updates, and it could help tackle one of the biggest issues with electric cars.

In October 2018, Inverse spoke with a series of Tesla owners in Norway to find out how the country became such a key market for Tesla. While owners loved the vehicles, a common complaint was the California-made cars struggled in colder weather with doors freezing shut and other issues. Tesla has worked to rectify such issues, like adjusting window positions for cold weather.

With this new addition, Tesla may be able to source some heat without draining the battery.

More like this
Innovation
13 hours ago
A wild new plane-train hybrid could whoosh you to your destination — if it can get off the ground
By Molly Glick
Innovation
8.5.2022 6:30 PM
This breakthrough stem-cell therapy could reverse genetic blindness
By Charles Q. Choi
Innovation
8.5.2022 11:00 AM
Alexa could diagnose Alzheimer’s and other brain conditions — should it?
By Joanna Thompson
Related Tags
Share: