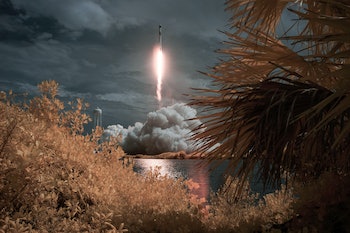 Last week, Musk Reads+ members heard from Homer Hickam, the NASA engineer whose story was captured in the film October Sky, about how he inspired a new generation of space explorers. This week, members will hear from David Anderman, former SpaceX general counsel, about plans for a Mars constitution.

A version of this article appeared in the “Musk Reads” newsletter. Sign up for free here.

Musk quote of the week — “Am thinking of starting new university: Texas Institute of Technology & Science.” — I know, it pains me as much to name this the quote of the week just as much as it pains you to read it. Elon Musk tweeted this quote on October 29, and as of writing, received over half a million likes and much media buzz. Is Musk really planning to create a new school? No. It’s a joke about tits. It spells “T.I.T.S.” Maybe not the best look for a leader in STEM?

Unfortunately, despite an “80% favorable” forecast, SpaceX’s Crew-3 launch has been delayed to November 3 because of bad weather. The Endurance capsule looks pretty great even while it waits, though.

Although you’ll have to wait a little bit longer to see the NASA-sponsored trip to the International Space Station, the entire launch will be available to watch live on NASA’s website at 11 p.m. E.T.

Similar to SpaceX’s last crewed flight, the Inspiration4, Crew-3 features three rookie astronauts who have not yet been to space. The crew is expected to return to earth later this November. Read more on Inverse.

While SpaceX plans for its next flight (and works on creating others), Tesla works on dispelling some rumors.

Or is it subtly starting them? Elon Musk continues to voice his displeasure with President Biden’s partiality towards unionized auto companies, which Musk seems to imply is a preference siphoned off of confirmed-corrupt former United Auto Worker officials. Biden, if you care to comment, please respond to this article?

Then, Musk hopefully put some naysayers’ lingering ill-will to bed by addressing the $465 million loan Tesla received from the U.S. government … and then paid off nine years ahead of schedule.

Say what you want about Tesla, but don’t say it won’t pay you back!

And as far as self-started rumors go, Tesla appears to have some really exciting features for Full Self-Driving users in its arsenal, telling users to get ready for “superhuman good” updates and safety goals.

The rumor mill keeps turning, and everything on the internet is true.

We wanted to give a heartfelt thank you to all of our readers! Let’s welcome some of our newest Musk Reads+ members:

A ranked list of everything Musk-related and online, handpicked weekly with bionic precision.

10. Elon Musk is ready to part with a sizable chunk of his multi-billion dollar fortune and “solve world hunger.” That is, as long as the United Nations’ World Food Program “can describe on this Twitter thread exactly how $6B will solve world hunger.” Debating millions of starving people in a Twitter thread seems bad, but you do you, world leaders!

9. Meanwhile, The Economist considers the future of food. Gourmet insects, anyone?

8. Although Biden’s contentious billionaire tax bill is dead, it’s worth revisiting Musk’s argument against it: “[preserving] the light of consciousness.” Read more on Inverse.

6. Okay, tone change! Here’s an interesting TikTok account from an engineer working on robotic prosthetics and making “the world a better place.” Nice.

5. Okay, tone change again! Some things on the internet are just so difficult to categorize, so intangible, so evil that they become pure only to revert to evil again. This musical YouTube account, “Crypto Karaoke,” which posts original songs about Dogecoin, Elon Musk, and how Covid-19 isn’t real (it is) is one of those internet things. Liberal Thom Yorke? Take notes.

2. Despite Crew-3’s unfortunate delay, you can still get excited for the flight by learning more about the crew in question. Or, in this case, what exactly is on their space playlists. Does my Spotify family plan work in space?

1. And a piece of Musk history: Let’s also revisit SpaceX’s first-ever crewed flight, which put SpaceX on the map as a reliable, human-friendly spaceflight company on March 2, 2019. The flight left Musk “emotionally exhausted,” but for him, it was worth it.

This has been Musk Reads #271, the weekly rundown of essential reading about futurist and entrepreneur Elon Musk. I’m Ashley Bardhan, assistant to Musk Reads.

Why subscribe to Musk Reads+? You’ll be supporting in-depth, high-quality journalism about the world’s most ambitious change-maker, Elon Musk. Tesla investors, SpaceX critics, and anyone with an interest will find something they love in our offerings. Independent journalism is essential now more than ever, and your contributions will help us continue in our mission to deliver interviews and analysis you won’t find anywhere else.

Have thoughts on today’s newsletter? Send us your questions and feedback at muskreads@inverse.com.

Musk Reads+ is a fully independent operation. We are not Elon Musk, nor are we employed by him. Our job is to report the events we find worthy of a story, giving you an inside look at the worlds of space rockets, electric cars, clean energy, and more. It means firsthand accounts of a SpaceX rocket launch, Tesla insights from third-party analysts, and more.

If you want to support us in our mission, and receive exclusive interviews and analysis, consider contributing with a subscription.

More like this
Entertainment
8.5.2022 12:30 PM
For All Mankind Season 3’s space mogul is better than Elon Musk — here's why
By Ryan Britt
Innovation
8 hours ago
This self-healing material could fix your dinged-up car in 30 minutes
By Molly Glick
Innovation
8.1.2022 11:00 AM
This novel technology could jump-start electric vehicle production
By Molly Glick
Related Tags
Share: