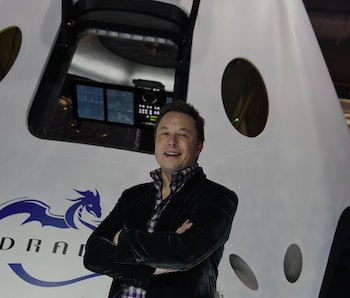 On May 25, 2012, the International Space Station received one of the most important deliveries in its history. Weighing in at 525 kg, the cargo included food, water, clothing, and computer equipment. There was even a gram of the ashes of Star Trek actor James Doohan nestled inside. But none of this was important.

What really mattered was that the delivery arrived onboard a SpaceX Dragon C2+ capsule, which landed back on Earth 10 years ago on May 31, 2012. It heralded the beginning of a new era for space travel that would transform the fortunes of both NASA and SpaceX.

Space Time is an Inverse series that remembers the most important moments in humanity’s exploration of outer space.

SpaceX had a lot riding on the success of COTS (“Commercial Orbital Transportation Services”) Demo Flight 2, as the mission was known. Amazingly, it was only the third ever flight of the Falcon 9 rocket, and the second for the Dragon capsule, and a successful docking in orbit would be crucial to proving that after a decade of rocket development, that SpaceX had a viable business model.

The company’s founder and CEO, Elon Musk, knew this too. Just before launch, he famously told CBS News, “I would have to be insane if I thought the odds were in my favor.”

But even back then, he was clearly quietly confident that the ISS mission would cement his company’s future.

“Assuming this is successful then we look forward to a steady stream of cargo flights to the station under our [Commercial Resupply] contract,” he said at a NASA press conference, prior to the launch.

“This is going to be recognized as a significantly historical step forward in space travel.”

Musk got his wish. NASA had previously agreed to contract SpaceX for 12 future cargo missions to the ISS with Dragon, and now the company had proved that it could actually deliver on them. For the first time, SpaceX had a reliable early customer and a guaranteed source of income for the years ahead. This gave the company plenty of opportunities to refine the Falcon 9 design and its most impressive innovation: the first stage can travel back down to Earth, make a controlled landing, and be reused.

The importance of this stream of resupply missions can also be seen in the launch statistics. In the rocket’s first three years, four of the seven Falcon 9 launches were part of the ISS Commercial Resupply Service. By 2021 when the company was more mature; resupply missions accounted for just five of the 31 launches (the rest were a mixture of private satellite launches, other government agencies, and building out SpaceX’s own Starlink satellite broadband network).

SpaceX, it appears, had been able to use ISS supply missions to build a viable commercial business model of its own.

Cargo missions were only a means to an end for SpaceX, and successfully docking a spacecraft with the ISS was only the beginning. Musk (and NASA’s) real goal was to transport humans to the ISS. For SpaceX, it would be another major milestone on the company’s mission to make human’s an interplanetary species. And for NASA, it would mean that, for the first time since retiring the Space Shuttle in 2011, the United States would have its own independent ability to launch humans into space, without having to rely on an uneasy partnership with Russia.

Musk made his intentions clear back in 2012. COTS Demo Flight 2 wasn’t just a test for the Falcon 9, it was a test for SpaceX’s future ambitions.

“Because we’ve designed the spacecraft and rocket to be very similar between crew and cargo, we would in the process be accumulating the knowledge about how a potential crewed flight might work,” Musk said at that same NASA press conference. “So if there’s an issue there’s a good chance we would uncover it on a cargo flight instead of putting the crew at risk.”

“The safest rocket ever launched.”

In fact, if Musk is​​ to be believed, the Dragon capsule may have been already ready to go for humans.

“Technically if you’ve got a little oxygen bottle and you stowed away on Dragon, you’d, in theory, be okay,” he said. “You could go to the station if you tucked away in there […] and come back too.”

And this was not the only sign human astronauts were on Musk’s mind. After all, why else would a cargo-only capsule have windows in its design?

Today, the Falcon 9 has achieved 155 successful launches. According to ArsTechnica senior space editor Eric Berger, it’s “the safest rocket ever launched.” It’s also carrying the most valuable cargo of all: People.

On May 30, 2020, Bob Behnken and Doug Hurley became the first astronauts to fly commercial to the space station on board a Dragon atop a Falcon 9. Since then, SpaceX has sent four further complements of four astronauts to the station too. NASA once again has a reliable, U.S.-based means of transporting humans to the International Space Station (and maybe beyond).

The future of space

One day, in the not too distant future, the vast majority of human space launches won’t be government scientists on government rockets traveling to government space stations. They’ll be private individuals traveling to space on commercial launches to, well, who knows where — the market will decide. SpaceX docking with the ISS was a major milestone towards that goal.

“This is, I think, going to be recognized as a significantly historical step forward in space travel,” Musk reportedly said back in 2012.

History may record COTS Demo Flight 2 as the first step towards the true commercialization of space. In September 2021, billionaire Jared Isaacman took three other regular civilians on his SpaceX Inspiration4 mission to orbit the Earth. In 2022, a company called Axiom sent three extremely rich men and a former astronaut to the ISS, ostensibly to carry out some very important experiments of their own. Soon this will become the normal way space travel is done.

The ripple effect from the flight goes further too.

In a happy coincidence, after years of setbacks, just last week Boeing finally made it to the ISS with its own Starliner capsule, making it a direct competitor to SpaceX. Human spaceflight is about to become a commercial battlefield — driving down costs, providing alternative launch options, and doing essentially what NASA was hoping a commercial space industry would do a decade ago.