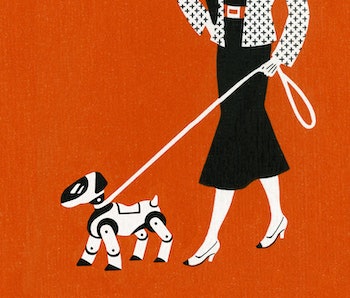 As science fiction movies grapple with the future role AI will play in our daily lives, some are exploring the possibility of robot pets, like the 2018 flick A-X-L, which features a superpowered robot dog who forms a protective bond with a human.

But before we can make this sci-fi future a reality, researchers say we need to better understand the intimate connections that underlie human-dog relationships.

With that goal in mind, cognitive scientists have identified seven behaviors that are crucial to a close relationship between canines and humans — which could also help researchers eventually develop “social robot” dogs. The findings were published Wednesday in the journal PLOS ONE.

“Our findings are significant as they shed light on those aspects of human-dog relationships that people value deeply, and provide a useful springboard for guiding the development of robots designed to provide pet-like companionship to people,” Emily Cross, a cognitive neuroscientist at the University of Glasgow in Scotland and Macquarie University in Australia, tells Inverse. Cross was a co-author of the study.

What’s new — Researchers conducted an online survey of more than 150 dog owners with open-ended questions to gain insight into their special relationships with their pets. The results pointed to seven behaviors that make up the unique dog-human bond. These factors include:

The majority of owners surveyed reported that shared playful activity helped them bond with their pets. Especially important were activities that brought dogs and family members together and playful behaviors that occurred on walks. One pet owner commented in the survey:

“When going out for a walk, he will always “check in” with me either by looking at me or licking my hand quickly. It is as if he is reminding me that he knows I’m still there and he hasn’t forgotten about me even though he is joyfully exploring.”

It was also important to owners that dogs initiated these behaviors because it signaled that the dog wanted to spend time with them. An example of initiated activities might include a dog barking when to play fetch.

As it turns out, absence doesn’t make the heart grow fonder — in human or dog relationships. Nearly 60 percent of owners cited close physical distance as a crucial factor in maintaining a proper bond with their pooch. Some markers of physical proximity included co-sleeping on the couch or bed, dogs following them from room to room at home, or running back to check in on the owner if they’ve wandered too far ahead.

“The owners reported perceiving this behavior as resulting from love, loyalty, or the owner being a perceived source of nurturance or protection,” report the study authors.

Even though humans and dogs don’t speak the same language, we still communicate in ways that foster close connections. Owners said a dog’s eye gaze was an important factor in clear communication, such as gazing toward an object and then back to the owner to indicate an urge to eat or play. If a dog maintained eye contact, this behavior demonstrated the animal’s attentiveness to the owner.

“Specifically, owners spoke of how they feel their dog looks at them to communicate a strong connection or love for them,” the study authors write.

Finally, survey respondents appreciated clearly intentional behaviors that easily signaled needs, such as the dog bringing a toy to the owner or licking them. In the same vein, some sixteen percent of survey respondents saw their pets’ communicative behaviors as a sign of intelligence, such as manipulating owners for more treats.

It turns out that touch is one of the five love languages for canines, too. Respondents noted a few specific types of physical touch that stood out:

More than a third of owners said cuddling is an important sign of the dog-human bond, but it wasn’t always clear what they meant by that term. Some referred to cuddling as lying side-by-side while sleeping in the same bed, and others specifically meant the dog resting its head on the owner.

Over forty percent of respondents claimed that consistent positive expressions — such as their pet greeting them upon their arrival home or responding to calls of their name — were necessary for their chummy relationships. But some thirteen percent of owners also like it when their dogs do unexpected things. One owner reported:

“He is obedient to a degree but has a mind of his own too? So, he will bring the ball back to us when we ask but maybe not give it to us.”

People like it when pets go above and beyond to express their happiness in their presence. One-third of pet owners said dogs will display enthusiastic behavior when they get home, including wiggling their rear ends, bringing them toys, excessively wagging the tail “like a propellor,” jumping up and down, and leaping into their arms.

Other expressive behaviors included dogs gazing with loving eyes. Humor was also significant to some eight percent of dog owners, who found their pup’s silly behaviors — like rolling around in leaves — endearing.

Attunement refers to the ability to pick up on emotional cues and respond to them, like sensing when someone is unhappy.

More than ten percent of owners said their dog is aware of their daily routines and will adjust their behavior accordingly. For example, owners reported that dogs will lie in bed right before their owner typically wakes up or will go to the owner’s side when their work is done (if they were working from home).

But more importantly, the survey revealed that dogs avoided their usual routine if their owners seem down. Some respondents said their pet was less likely to paw at them for attention or bother them about going for a walk if they weren’t feeling well, but instead would sit by their side to offer comfort.

Why it matters — While pup owners are surely eager to learn the ingredients of a solid human-dog relationship, this kind of research can also aid the eventual development of dog-like social robots.

Social robots, unlike your Roomba, are intended as companions that could combat loneliness, especially in an aging and increasingly isolated population. Loneliness is reaching all-time highs as 61 percent of young adults in America reported feeling “serious loneliness” in 2021, particularly as a result of the Covid-19 pandemic. The United Kingdom even appointed a loneliness minister to tackle the severity of the problem.

Researchers in the PLOS ONE paper say robot companion dogs could help combat loneliness, but they need to “look and act the part” to truly work. Surveys that glean deeper insight into pet-human relationships mark the first step in making robot dogs a reality. After all, it’s not enough for robot dogs to simply bark or play fetch — they need to be able to replicate the affectionate moments between humans and pets.

“Of course, we are not suggesting that any robot dogs of the future will replace or displace real dogs for people who love real dogs,” Cross says.

Rather, Cross says we can try to recreate dogs’ social behavior on “robotic platforms” that may assist people who aren’t able to care for dogs, such as those with allergies or people living with dementia, as well as people with particularly busy schedules.

What’s next — But there’s still a ways to go before Fido the Robot Dog becomes a reality. The study has a number of limitations that future research will likely address. For example, most participants were female, and all owned dogs, so the present data may not be as helpful if social robots are to assist people who have never had a furry companion.

Greater diversity in respondents for future research could help examine “how context, culture, and form might influence perceptions of such robots,” the paper claims.

Ultimately, the study authors hope their research will help humans “to treat these robots more like a companion (as happens with real dogs) than a machine or toy composed of metal and plastic.”

More like this
Science
Feb. 5, 2023
The Plague Is Still Here — And It Could Infect Your Cat
By Tara Yarlagadda
Science
Jan. 29, 2023
Are coyotes dangerous to dogs and cats? Here’s how to keep your pets safe
By Tara Yarlagadda
Innovation
Jan. 25, 2023
Watch: This jail-breaking wireless robot melts and reassembles on command
By Jennifer Walter
LEARN SOMETHING NEW EVERY DAY.
Related Tags
Share: