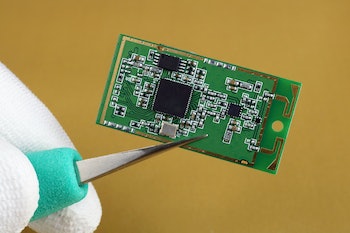 One of my favorite tinfoil hat theories about the Covid-19 vaccine was that with each shot administered, a microscopic microchip would be inserted into the person receiving the jab. This chip could be used for all sorts of stuff: advertising, GPS tracking, obviously mind control.

Recently, the chief scientific officer of a data company that makes wearable tech wrote about this theory for The Atlantic, breaking it down bit by bit. Essentially, it’s technically impossible. But still, during that 15-minute waiting period after receiving his first vaccine shot, he thought about it!

Our lead story today is about actual internal microchips — internal pharmacies — that are being developed by DARPA (the branch of the military that creates high-tech devices to push forward American defensive capabilities).

Far from a conspiracy theory borne out of a paranoid fantasyland of the dumb internet, this device in development will use genetically engineered, light-sensitive cells to hack your body’s natural processes.

Here’s a snippet of the story by staff writer Katie MacBride. (Keep scrolling down 👇 to read the full story.)

Combining synthetic biology with bioelectronics, the team will engineer cells to produce the same peptides the body makes in order to regulate sleep cycles, precisely adjusting timing and dose with bioelectronic controls. When the engineered cells are exposed to light, they will generate precisely dosed peptide therapies.

I’m Nick Lucchesi, an editor for Inverse, where we aim to mix science and culture to make you a little smarter about your world. It’s Monday. (We can do this.) And be sure to check the bottom of this email for a brief tribute to one of my favorite poets on the anniversary of her birth.

Mailbag — Last week we asked you to share some of your weirdest stories about flying in your dreams. (It can really be helpful when you’re awake.)

Let us know about your weirdest dream that involves flying. We’ll publish our favorites in a week or so. Reply to this email if you’re reading this on email. If you’re reading on the web, send your story to newsletter@inverse.com.

A tech tip before we jump in: Gmail users, make sure you never miss an edition by dragging the email version of this daily dispatch to your Primary tab. Here’s a GIF that shows you how:

This is an adapted version of the Inverse Daily newsletter for Monday, June 7, 2021. Subscribe for free and earn rewards for reading every day in your inbox.

A military-grade implant to cure diarrhea — The military is developing an implant that uses genetically engineered, light-sensitive cells to deliver peptide therapy for jet lag and diarrhea. It’s a wild story by Katie MacBride:

If hearing the words “military,” “soldier,” and “implant” all in the same sentence conjures images of Jason Bourne, you’re not alone — and with good reason.

The military is currently working with scientists to develop new technology to implant in soldiers. But this time it has less to do with creating superhuman assassins and more to do with quelling jet lag and diarrhea.

In May, researchers from Northwestern University signed a $33 million dollar contract with the Defense Advanced Research Projects Agency (DARPA) to develop a wireless implantable device that will function as a “living pharmacy” for military personnel. It’s called a living pharmacy because everything the “patient” needs can be produced by their own body.

NASA's return to Venus could save the Earth — NASA selected two missions to fly to Venus to study the planet's atmosphere and geological history. Passant Rabie writes why that science could help save Earth:

“I did a lot of screaming and jumping up and down,” Grinspoon tells Inverse. “I scared my dog.”

Last week, NASA selected both DAVINCI+ and another Venus mission, VERITAS, to study the planet’s atmosphere and geological history. It will mark a return to Venus after decades away. By returning to Venus, it could answer questions both intriguing, like if Venus ever had the right conditions for life, and existential, like if Venus is a vision of our future.

The three best cases for UFOs — Inverse’s John Wenz sits down with the science director of the Center for UFO Studies to learn which sightings have the best evidence behind them:

Ten years ago, it was a meme based on the Ancient Aliens TV show on the History Channel.

Today, UFOs live in the present. They’re flying high on 60 Minutes; they’ve landed on the pages of the New York Times and in the esteemed columns of the New Yorker. And the Washington Post. The drip-drip of videos asserting their existence has turned into a steady flow in the last five years.

An imminent Pentagon report — due out June 25 — could put the question of whether UFOs are real to bed. UFO expert and scientist Mark Rodeghier recently told Inverse in an interview what we probably will learn from the government’s alien report.

Nintendo fans are going to bizarre lengths — Nintendo fans really want to confirm the existence of the Switch Pro. They have even contacted Best Buy and received some intriguing responses, reports Tomas Franzese:

The wait for Nintendo Switch Pro is starting to get frustrating.

After over a year of rumors and leaks about the supposed mid-generation hardware refresh, the latest reports suggested that an announcement for the system would come before E3 2021. As of June 7, the start of E3’s media days approaches, but Nintendo still has not confirmed the existence of the Switch Pro.

As such, some fans are now taking it into their own hands to investigate and reach out to third-party retailers and learn more from retailers to try to confirm the existence of the Switch Pro before its official unveiling.

Switch over to these stories:

Why do male and female bodies look the way they do? Compared to species like elephant seals and peacocks, we’re outright boring — similar flesh suits sharing similar lumps.

It’s understood evolution drives the overall process, but scientists are on the hunt to understand the specifics — and debunking some theories in the process.

One idea is that way back in hunter-gatherer days males had to be strong to hunt and thus evolved to have more strength than females. This implies that when humans transitioned to farming, changes in the human body (like weaker bones) reflected that adaptation. Male and female bodies, in turn, evolved to be more similar to each other because of farming — or so goes the theory.

But using genetic data, researchers from Pennsylvania State University may have irrefutably debunked that idea.

Evolve with these stories:

Selected Poems is the classic volume by the distinguished and celebrated poet Gwendolyn Brooks, winner of the 1950 Pulitzer Prize, and recipient of the National Book Foundation Medal for Distinguished Contribution to American Letters. This compelling collection showcases Brooks's technical mastery, her warm humanity, and her compassionate and illuminating response to a complex world. This edition also includes a special PS section with insights, interviews, and more—including a short piece by Nikki Giovanni entitled "Remembering Gwen."