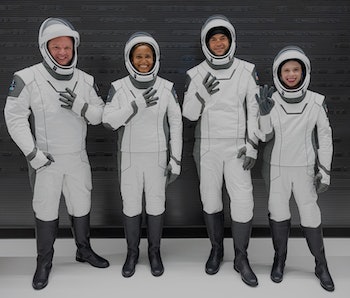 Last week’s all-civilian Inspiration4 mission featured everything that makes Elon Musk and his companies work: big rockets, a billionaire’s promise, and just enough action to make you feel like he delivered.

A few undeniably good things happened because of the three-day trip, but they’re all wrapped up in emperor’s clothing:

So, despite the wholesome, Average Joe paint applied to Inspiration4, what makes it different from Richard Branson’s disgraced joyride, or Bezos’ phallic space playdate, especially since these flights, too, had inspiring civilians on board?

Well, Musk’s somewhat inexplicable charisma is hard to beat. He doesn’t appear to be like those other billionaires. He’s on Twitter! He likes memes! He wants to bring humanity to Mars for the first time, a more interesting cause than Branson’s airline company, a more seductive grab at immortality than Bezos’ pillowy lips.

The lips in action.

There are always people who will defend a mission like Inspiration4 and a man like Elon Musk because they are inspiring on their face.

Most people don’t have a wealth of opportunity to spend their time reaching for distant worlds. Musk and his projects are outlets for people to escape their more mundane lives. The Inspiration4 crew is a projection of what mundanity might become. When you see Iraq veteran Chris Sembroski smiling from space, you imagine that, maybe one day, that could be you there, smiling, too.

We believe in wanting to do good — St. Jude’s is a worthy cause, as is Musk’s broader pronouncements of saving humanity from the climate mess we made. We trust what we feel like we can relate to, and Inspiration4 is very relatable.

But our earthly problems won’t be solved by beaming up and away from them, especially not when there are people who have the power and resources to fix them here on Earth if they really wanted to.

It turns out that giving non-billionaires a chance to soak in the space sunsets Isaacman purchased doesn’t change the fact that, ultimately, he is a very rich man who wanted to know what space was like.

Space travel has its own environmental impact, but because a billionaire wants to, we have been convinced to raze our planet in search of another one (which, in time, we might also ruin with overconsumption and hierarchy).

And so, some people aren’t convinced of Inspiration4’s goodness, although Isaacman chose his charitable framing well. “Imagine if we used the money [for Inspiration4] on something useful?” one Twitter user wrote, “Like helping Flint or New Orleans or Skid Row?”

“Accomplished nothing,” one (more flippant) Twitter user wrote about Inspiration4. “Elon is laughing all the way to the bank.”

Despite all this, SpaceX is pleased with the effect Inspiration4 has had on “sales and marketing,” although the “price of the mission” itself is “obviously private.” This secrecy doesn’t exactly bode well for the new space age, which recent space tourists have suggested is happening for the benefit of the general population. Don’t we have the right to know the price of our future?

Maybe we aren’t meant to be part of it.

More like this
Innovation
8.8.2022 10:00 AM
A wild new plane-train hybrid could whoosh you to your destination — if it can get off the ground
By Molly Glick
Innovation
8.14.2022 10:00 PM
60 years ago, an iconoclast designer revealed a fix for our biggest tech problem
By Tim Gorichanaz and The Conversation
Entertainment
8.5.2022 12:30 PM
For All Mankind Season 3’s space mogul is better than Elon Musk — here's why
By Ryan Britt
Related Tags
Share: