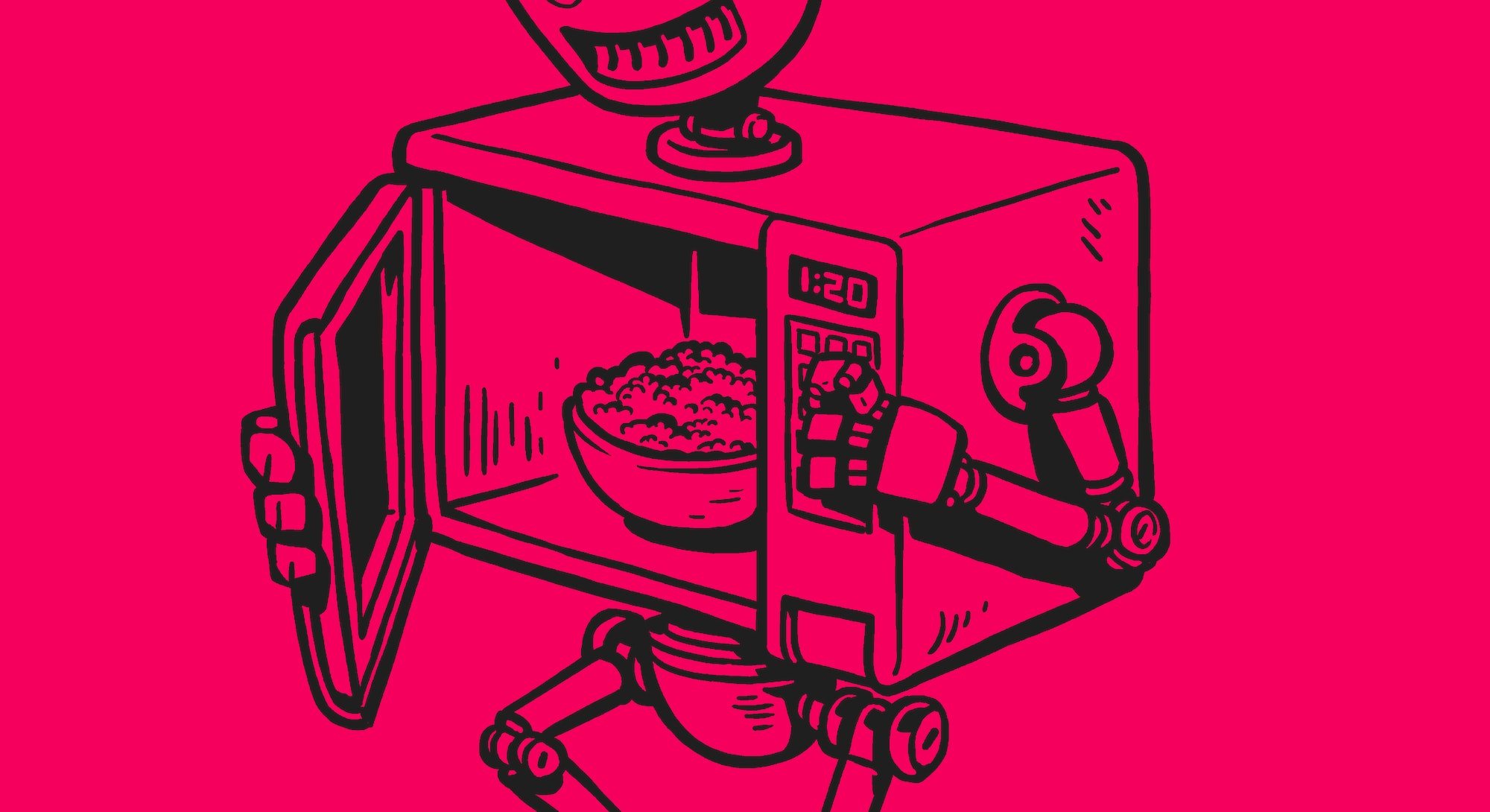 If you ever cook according to a recipe, you will inevitably come to a critical step in preparing any dish: tasting it. But what if your blender could sample your tomato soup for you and perfect it to your personal specifications so you don’t have to slurp a subpar concoction?

It might seem fantastical, but in truth, robots are already pretty good at preparing food. They can flip burgers, assemble pizzas, and yes, whiz up a soup. But there’s a massive problem: Robots can’t taste anything they make — and that means it might all be inedible for the humans who want to eat their dishes.

“People are already eating many machine-produced foods everywhere, but it is still hard to compete with good human chefs,” Fumiya Iida, a professor in Cambridge’s Department of Engineering, tells Inverse.

Iida and his team at the University of Cambridge think they might have an (albeit rather icky) solution to the robot chef problem: In a recent paper, they describe how they taught a robot to assess the saltiness and texture of a dish at different points in the cooking process. It’s part of a growing effort to build robots that can prepare food commercially — and perhaps even edge out both line cooks and Michelin-starred chefs.

HORIZONS is a newsletter on the innovations of today that will shape the world of tomorrow. This is an adapted version of the May 12 edition. Forecast the future by signing up for free.

Iida’s collaborator, Grzegorz Sochacki, tells Inverse he believes that robot chefs could start replacing fast-food workers or working in ghost kitchens within the next decade — but more complicated cuisines may be more insulated from the encroachment of automatons.

“Our recent publication showed how complicated human taste perception is, and our robot chefs are still far behind,” Iida says.

One of the reasons robots can’t taste food is because they can’t chew it. Chewing is essential to cooking because masticating food helps chefs judge changes in texture and taste. So the researchers created a ‘taste as you go’ method for robots. In their paper in the journal Frontiers in Robotics & AI, the scientists claim that their technique helps the machine quickly and accurately assess a dish’s saltiness — specifically, scrambled eggs and tomatoes.

The researchers had their robot chef taste nine different variations of scrambled eggs and tomatoes. The robot sampled each variation at three different time points and produced ‘taste maps’ of the various foods.

To make a robot equivalent of a human mouth, the researchers hooked up a conductance probe, which acts as a salinity sensor, to a robot arm. They then prepared scrambled eggs and tomatoes, varying the number of tomatoes and the amount of salt in each dish. The robot used the probe to taste the egg concoction and returned results in a few seconds, significantly faster than existing automaton tasting methods.

Foodies might disapprove of the next part of the experiment. To imitate chewing, the team put the egg mixture in a blender. After “chewing,” the robot tested its dish again and produced new taste maps that could be used to adjust the original recipe to taste.

“No other robotic cooking has considered the use of taste senses. In other words, they are cooking without the sense of taste,” Iida said.

In the future, the researchers plan to improve the robot chef so it can taste different types of food than eggs and try to give it the ability to sense other tastes — sweetness, or creaminess, for example.

As engineer Sochacki suggests, robot chefs may be in the most demand in fast-food or high-volume kitchens — which are also typically staffed by the lowest-paid human workers in the food industry.

Robots have already begun replacing fast-food workers and taking on more tedious prep work. Fast-food giant White Castle is experimenting with a robotic burger flipper called Flippy in 100 of their locations, while Chipotle is testing a similar robot, Chippy (both made by the company Miso Robotics), to prepare their tortilla chips in an imperfect, human-like way.

“People will eat robot-prepared food in restaurants if they know it’s safe and healthy.”

“By automating tedious or routine tasks, restaurants are able to run their operations more efficiently with less labor, thereby saving on labor costs while maintaining a great customer experience, Sam Zietz, the CEO of GRUBBRR, a self-ordering restaurant technology company, tells Inverse. It is important to note that most restaurant workers in these jobs are among the lowest-paid members of the service industry in the U.S. and are often not eligible for employer-provided benefits.

Hyper Food Robotics makes fully-automated restaurants that can cook, clean, and package food without human interaction. Unlike partially automated kitchens that use robots designed for a single task like flipping burgers, the company’s self-contained, fully autonomous restaurants use sensors, cameras, and AI technology to integrate ordering, delivery, and cooking. In 2021, Hyper launched a concept robot pizza restaurant that can prepare up to 50 pies per hour.

Prepping vegetables is one thing, but can robots really do the job of a trained human chef? Kenzo Kishita, a food blogger and former professional chef, thinks it’s more likely that robot chefs will be used in restaurants with an established staff rather than taking over from humans.

“They could, however, help free up human chefs so that they can focus on more creative tasks,” he tells Inverse.

“No other robotic cooking has considered the use of taste senses... they are cooking without the sense of taste.”

Kishita thinks restaurant-goers are likely to be willing to give robot-prepared food a try.

“People will eat robot-prepared food in restaurants if they know it's safe and healthy,” he says.

“Even if it’s not what they would choose to eat at home, they might still feel like it’s worth trying out at a restaurant.”

Engineer Sochaki points out that machines are already used in food processing — but don’t expect these robots in your kitchen along with your microwave anytime soon.

“Robot should be just a step ahead from a blender or oven,'' he says. “Moreover, robots could cook in a client's view, for example, behind glass.”

“Home kitchens would be much harder as they are not standardized as kitchens in a restaurant chain,” he said.

Not least because robots are so hard to clean. Unlike a human chef, who washes their hands and the grill between orders, robots do not clean themselves and instead require an outside person to clean them, Zietz points out.

Michelle Hardy-King, a regional director in the global food division at NSF, a public health and safety organization, says the critical control point to overcome would be the avoidance of cross-contamination.

“This is a daily, hourly, even minute-by-minute risk for both humans and robots,” she says.

“If employment levels turn to pre-pandemic levels, the industry will still be challenged by high levels of turnover, which ultimately will continue to hurt restaurant operations and efficiency,” he says.

The efficiency of robot kitchens could help assuage increasing concerns about food waste. According to the US Environmental Protection Agency report, restaurants are among the most significant food wasters.

Udi Shamai, the CEO of Hyper, the pizzabot company, tells Inverse that using robotics in kitchens can reduce food waste and food costs. Restaurants could consistently and accurately dispense the necessary ingredients for each meal and eliminate any human error from the equation, he says. Of course, it would also potentially eliminate a lot of the humans, too.

“With fully automated restaurants, like ours at Hyper Food Robotics, advanced AI systems monitor and control the environment of food storage containers in real-time to ensure no ingredients spoil —- even on slower days,” Shamai adds.

A recent survey by the food technology company Deliverect finds that 73 percent of respondents say having accurate portion sizes to avoid food waste is important to them, and 68 percent feel restaurants should have precautions to prevent unnecessary food waste.

In an interview, Taka Tanaka, the CEO of AUTEC, a commercial sushi robot company, tells Inverse that his automatons could help reduce waste. Although an experienced chef can precisely form sushi rolls, a novice chef will likely make mistakes, adding too much or too little rice.

“By incorporating our sushi robot into an operation, the rice sheets and balls are consistently produced the same each time,” he says. Robot onigiri anyone?

HORIZONS is a newsletter on the innovations of today that will shape the world of tomorrow. This is an adapted version of the May 12 edition. Forecast the future by signing up for free.