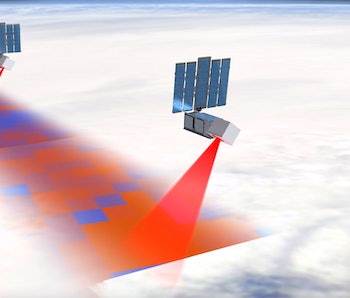 It was all going according to plan. On Sunday, June 12 an Astra Rocket 3.3 launch vehicle blasted off on a journey to space. It launched at 1:43 p.m. Eastern from a pad at Cape Canaveral, Florida, carrying a payload of two NASA satellites designed to track and study tropical cyclones and other storms as they emerged and developed to a higher degree of accuracy and speed than existing storm satellite monitors.

The first stage of the rocket fired for the intended three minutes, and then the upper stage separated and its engine fired for a planned 5 minutes and 15 seconds. For about four minutes, that seemed to be going well, too. And then it stopped. The body of the upper stage fell. The satellites were lost.

HORIZONS explores the innovations of today that will shape the world of tomorrow. This is an adapted version of the June 13 edition. Forecast the future by signing up for free.

What happened — Astra was picked by NASA to launch two of six Cubesats destined to study the formation and evolution of tropical cyclones from space, a mission known as TROPICS. Astra seems ideally suited to this task: It is a private space launch company that puts satellites and other payloads into space all under a banner mission of making Earth better — TROPICS is the company’s first explicit Earth science mission. Following Sunday’s failure to launch, however, future launches with Astra are on pause, NASA says. After the catastrophe went down, Astra took to Twitter to release a brief statement on the issue:

“We had a nominal first stage flight. The upper stage shut down early and we did not deliver the payloads to orbit. We have shared our regrets with @NASA and the payload team. More information will be provided after we complete a full data review.”

Here’s the background — TROPICS was designed as a satellite constellation of six satellites to be positioned at three slightly different points in low-Earth orbit at a 30-degree angle above the equator — this positioning is strategized to keep the satellites’ eyes on the region of the Earth where most tropical cyclones form and build steam. The idea was that at least one satellite of the six would pass over any given spot within that area once an hour.

If that were the case, TROPICS would offer an hour-by-hour storm update — about four times faster than current NASA and National Ocean and Atmospheric Administration (NOAA) satellites, which give storm updates every four to six hours.

TROPICS are equipped to “read” a storm and provide its operators with 3-D images of the storm’s environment, information on how it is growing, and better predictions of what it may go on to do.

“With the TROPICS constellation, we’ll have much more frequent observations of tropical cyclones, and in wavelengths that can help us understand thermodynamic structure in the eye and in the storm environment,” says Bill Blackwell, principal investigator for the TROPICS mission, on a NASA blog post about the mission.

What will happen to TROPICS? NASA is committed to completing the TROPICS mission goals — just with fewer pieces of kit — according to an update posted to their site following the launch failure:

“Despite a loss of the first two of six satellites, the TROPICS constellation will still meet its science objectives with the four remaining CubeSats distributed in two orbits. With four satellites, TROPICS will still provide improved time-resolved observations of tropical cyclones compared to traditional observing methods.”

If you have ever worked under artificial lighting as your only source of light, then you likely know the feeling of slight malaise that comes with it. There is something uncannily terrible about being kept under the glare of a fluorescent tube instead of a burning ball of plasma some 94 million miles away from Earth. Turns out we are not alone — plants show strange effects from being under the influence of artificial light, too.

What’s new — In a study published in the journal PNAS Nexus, scientists describe how artificial lights at night — street lamps, for example — alter plants’ circadian rhythms, essentially throwing off the internal clocks that govern their life cycles. In particular, the study finds, the change in rhythms lengthens pollen seasons by starting spring early and autumn late.

In the study, the authors write:

Developing lighting strategies that minimize the impact of [artificial light at night] on ecosystems, especially those embedded and surrounding major cities, is challenging but must be pursued.

It’s an interesting factor to keep in mind when thinking about how to design equitable, sustainable, and safe cities for the future. Increasing urban plant life has been shown to reduce heat islands in cities, increase health equity, and boost residents’ well-being and general health.

See it to believe it

Scientists coated a robot finger in human skin. They grew the skin onto the robot skeleton over the course f several weeks in the lab, waiting until the skin was a few millimeters thick — much like human skin on our own fingers.

After that, they bent it to test how elastic the skin was (elastic enough, it turns out), and even made an incision in the skin to see if a collagen “bandaid” would be enough to prompt the wound to seal itself up — that worked, too.

Watch it in action, via Science News:

5. Pfizer-BioNTech’s Covid-19 vaccine schedule is effective in children under 5, the FDA says. The New York Times delves into the news and what it means for unvaccinated kids.

4. A Google employee claimed its A.I. “has a soul,” The New York Times reports. But Google vehemently disagrees, as the paper reports.

3. Sonic booms are extra irritating if you live in cities, even if they are just little ones, reports Science News. The reason has to do with how cities are built, offering insights into future city planning around faster aerial transport.

2. Cereal maker Magic Spoon is disrupting Big Cereal. Techcrunch explains how health-food company Magic Spoon is wooing investors and ending up on a grocery store shelf near you.

1. Your bathroom cabinet harbors a better way to slice cake, according to CNET. It’s dental floss, the low-tech kitchen hack you didn’t know you needed...

Could you soon take a less smelly journey on the subway? Perhaps, if a new scheme goes well on Boston’s mass transit system, the MBTA, according to The Boston Herald. The newspaper reports that the MBTA will install urine sensors on four elevators at stops across Boston. The sensors are designed to alert “transit ambassadors” know when someone has taken a leak in the elevator. Once alerted, a cleaning crew can come and scrub the elevator.

(If it works, this writer would like to personally advocate for the same to be installed in New York by the MTA, thank you.)

This has been HORIZONS, a newsletter that explores the innovations of today shaping the world of tomorrow.

Do you think it can be improved? Have a story idea? Send your tips and all other musings to horizons@inverse.com

More like this
Innovation
November 24, 2022
Human-free farms could solve a major food problem
By Molly Glick
Science
November 27, 2022
Can I feed my pet only dry food? Why the answer is different for cats and dogs
By Tara Yarlagadda
Gear
November 30, 2022
A four-door Corvette EV could shirk every rule in the sports car’s playbook
By Jackson Chen
Related Tags
Share: