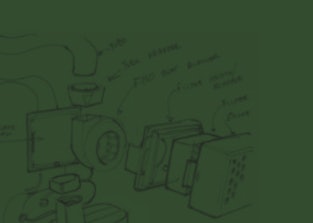 People could wear a Ford-3M mask.

Ford and 3M are combining to make 100,00 respirators. They're calling it Project Apollo.

Ford and 3M, two historic powerhouses of American industry, have announced that they have developed a new powered air-purifying respirator.

The announcement came as Governor Andrew Cuomo of New York, the state hardest hit so far by the pandemic, says the state might have reached a plateau in its daily death count.

The PAPRs, which resemble a spacesuit or HAZMAT attire, are being assembled at a Ford facility near the company’s Michigan headquarters, the company announced Monday afternoon. They are being built by 90 paid volunteers from the United Auto Workers (UAW) union, according to a company press release, will start on April 14, and the companies anticipate that these volunteers will be able to build over 100,000 high-tech respirators.

Jim Baumbick, vice president of Ford Enterprise Product Line Management, spoke in a press statement about how the companies have joined forces.

“We knew that to play our part helping combat coronavirus, we had to go like hell and join forces with experts like 3M to expand production of urgently needed medical equipment and supplies. In just three weeks under Project Apollo, we’ve unleashed our world-class manufacturing, purchasing and design talent to get scrappy and start making personal protection equipment and help increase the availability and production of ventilators.”

“Project Apollo” is what Ford has named its partnership with the Minnesota-based 3M, which began on March 24. Known for its wide range of products, which range into the tens of thousands, the novel coronavirus pandemic has placed a premium on 3M’s medical products.

A PAPR consists of a hood and face shield which can cover a nurse or factory worker’s head and shoulders, What takes the system beyond a mere mask and shield is a high-efficiency (HEPA) filter system that provides a supply of filtered air for up to 8 hours. This HEPA system is powered by fans similar to those found in the seats of Ford F-150 trucks, which use a rechargeable battery.

Designs for the PAPR began to emerge shortly after the partnership was launched, with Ford’s North American product communications manager, Mike Levine, tweeting out a potential sketch.

Speaking to the press on a conference call, Ford and 3M executives described the partnership thusly: Ford (and the UAW) bring the workers, the facilities, the engineering ability and the supply chain for distribution. 3M is bringing its experience in making PAPRs.

It's a chance for a company that is sometimes somewhat anonymous behind its commonly known items to stand out, says Bernard Cicut, vice president of 3M Personal Safety Division's in a press statement.

“3M is dedicated to helping to protect our heroic health care workers and first responders globally, including sharing our scientific expertise to increase supply of needed PPE. We are proud to stand together with Ford in this effort, as they have helped us increase manufacturing of existing 3M PPE products and, together, we have rapidly designed a new PAPR to help protect these heroes.”

From 3D printing makerspaces to fashion designers, people with the means to do so all over the world are contributing to the fight against coronavirus. Ford is also exploring converting the material used to make airbags, nylon with a silicon coating, to make 75,000 reusable gowns for a hospital patients a week. Given the ongoing nature of the crisis, the company plans to scale up to 100,000 gowns by next week.

It's not just Ford that's (at least temporarily) restructuring to fight coronavirus. In late March, German car company Volkswagen announced it would be 3D printing ventilators, as has Tesla, which recently put out a video featuring a nurse saying that they had made "amazing first steps."

Like others, the auto industry will be hit hard by coronavirus. Ford expects to lose $600 million in the first quarter of 2020 alone. But luckily, the company says it has a rough $30 billion cash cushion which will help soften the blow. That cushion gives them enough flexibility to help out in the international effort to fight coronavirus. But if the economy continues to be pushed to the brink, it's hard to say how long these much-needed efforts can continue.

More like this
Innovation
8.9.2022 11:00 AM
This self-healing material could fix your dinged-up car in 30 minutes
By Molly Glick
Innovation
8.5.2022 6:30 PM
This breakthrough stem-cell therapy could reverse genetic blindness
By Charles Q. Choi
Innovation
8.8.2022 10:00 AM
A wild new plane-train hybrid could whoosh you to your destination — if it can get off the ground
By Molly Glick
Related Tags
Share: