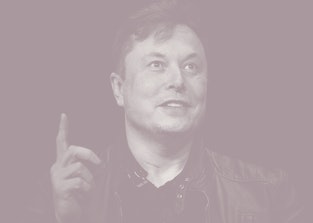 The number of N95 masks Elon Musk has ready to go

Coronavirus: Elon Musk contributes key resources when they're needed most

Elon Musk, Tim Cook, Mark Zuckerberg and other technology CEOs have committed resources to fighting the coronavirus outbreak. As the virus spreads across the world, healthcare professionals are requesting more ventilators and masks.

The Seattle Times reported Sunday that Musk's firm Tesla had donated 50,000 N95 surgical masks to a UW Medicine physician. Musk claimed that same day he was expecting to ship around 1,200 ventilators in the coming week, with help from his other firm SpaceX, and the day before noted he'd had a conversation with medical device firm Medtronic. Musk told CleanTechnica Saturday that he had 250,000 N95 masks ready to go.

"We’re working on ventilators, even though I think there will not be a shortage by the time we can make enough to matter," Musk wrote on his Twitter page Thursday. Musk told MSNBC the following day that it would take around eight to 10 weeks for ventilator production to reach its peak. The moves are something of a change from Musk, who on March 6 dismissed the coronavirus "panic" as "dumb."

The efforts are needed now more than ever. Research from the Society of Critical Care Medicine explained on March 18 that the United States would need to put around 960,000 patients on ventilators, but the country only has around 200,000 to hand. Amid widespread reported shortages of N95 masks, president Donald Trump claimed Friday that his administration has ordered 500 million units to combat the virus.

Musk isn't the only tech boss taking part in efforts. Facebook CEO Mark Zuckerberg stated Sunday that he has donated an emergency reserve of 720,000 masks to fight the virus, a reserve the firm built up in case the California wildfires continued. Apple CEO Tim Cook pledged that his company would deliver "millions" of masks in the United States and Europe.

CNBC reported Monday that Salesforce CEO Marc Benioff has contributed 9,000 masks to the University of California, San Francisco. Benioff plans to ship up to five million more masks in the coming week, plus personal protective equipment.

Other firms are working with existing suppliers to help increase production. General Motors announced Friday a collaboration with Ventec Life Systems to help increase the production of its respiratory care products. Automotive News reported that Ford has also pledged to "help the administration in any way we can."

These efforts come as the coronavirus outbreak continues to spread across the world. At the time of writing, the New Statesman reports there are 234,038 active Covid-19 cases in the world. There are 100,345 reported recoveries and 15,306 deaths. More than 30,000 active cases are in the United States, and half of the country's cases are in New York City alone.

The contributions could help more people recover in an under-strain healthcare system. But the move is something of an about-face for Musk, who earlier this month had dismissed the coronavirus "panic" as "dumb." In an email to SpaceX employees, he described COVID-19 as “not within the top 100 health risks in the United States...there are about 36 thousand automotive deaths per deaths [sic], as compared to 36 so far this year for C19.” Brandon Brown, an associate professor of epidemiology at the University of California, Riverside, told BuzzFeed that Musk's logic was "crazy." Musk was also criticized for claiming on Twitter that "kids are essentially immune" from the virus.

The company's Fremont facility closed Monday, after a long back-and-forth over whether the facility could remain open with a reduced workforce. When asked about his previous comments on describing the "panic" as "dumb," Musk replied that "panic is always dumb."

It's not the first time that Musk's input into a crisis has caused controversy. He tried to help rescue a group of children from a Thai cave in 2018 with a small submarine, but ended up arguing in court over whether he defamed a cave explorer by referring to him as "pedo guy."