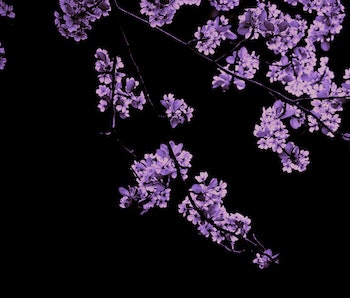 Here’s a weird thing — in cities all over the world, there are thousands of fruit trees that don’t bear fruit. Pear, plum, and cherry trees are prized by urban planners and tourism boards exclusively for their colorful blossoms — treated as ornamentation rather than as a crop. This makes complete aesthetic and little practical sense. If separating where people live from where their food is grown is a bad idea — anecdotal and scientific evidence supports this conclusion — then it’s fair to say that all those rows of trees are as ludicrous as they are attractive. When hungry people sleep under them, the harvest is only bitter irony.

Now, Guerrilla Grafters, a San Francisco-based art/graffiti/gardening/social justice collective, is lashing out against the idea that fruitless planting is acceptable. The loose collective of anonymous, activist gardeners grafts “scions” from fruit-bearing trees onto their ornamental cousins, thereby turning decorations into potential future meals. This work is illegal — public property and all — but that doesn’t mean GG plans to halt their midnight missions along residential streets in well-heeled hoods.

“We aim to turn city streets into food forests, and unravel civilization one branch at a time,” their mission statement reads.

Grafting is a technique that gardeners have used for thousands of years towards all sorts of different goals. A cutting from one plant is spliced onto the root system of another, and if their vascular cambium tissues match up (the layer just below the bark where nutrients flow), the two plants just might heal together and continue to grow as one.

Imagine you have a crab apple tree in your small urban backyard. You’re getting a little sick of crabapple jelly. No need to pull up your tree and plant again — just graft the shoots of edible apple trees onto your existing tree and within a few years you will have diversified your bounty. You can even graft several different types of fruit (within the same family) onto a single tree. An Australian company sells “fruit salad” trees with up to six different kinds of fruit. That’s pretty efficient use of your limited backyard resources.

Commercial apple growers use grafting for other reasons. Apple trees are wildly genetically diverse, and left to its own devices a single tree might produce a wacky array of fruit. The only way for producers to ensure a consistency of size, color, and flavor is to use grafts from a branch that is known to produce a particular variety. Apple growers also graft onto dwarf trees, which allows more energy for fruit production and makes harvesting easier on the pickers.

Of course, generating an urban bounty involves more than the act of grafting alone. There’s a reason besides aesthetics that municipal departments often favor sterile trees: In our disconnected neighborhoods, fruit that does get produced on public lands is often left to fall on the ground and rot, which is not only wasteful but attracts flies and pests. It’s a real problem, but community groups have sprung up all over the country to help address it, recruiting armies of volunteers to map and harvest the public bounty and distribute it to those who can use it.

What the Guerilla Grafters’ work illustrates is that planting purely ornamental fruit trees on city land is an act of consummate cynicism. The only logical reason to do so is the belief that citizens can’t be trusted to share a harvest. From a social perspective, that’s a bummer, and from a civic perspective, it’s a cop-out. Through the eyes of a grafter, fruitless trees aren’t so beautiful after all.

More like this
Innovation
7 hours ago
60 years ago, an iconoclast designer revealed a fix for our biggest tech problem
By Tim Gorichanaz and The Conversation
Innovation
3 hours ago
47 popular home upgrades people are making that are under $35 on Amazon
By Christina X. Wood
Innovation
8.3.2022 7:30 PM
This genetically modified rice could transform the global food supply
By Joanna Thompson
Related Tags
Share: