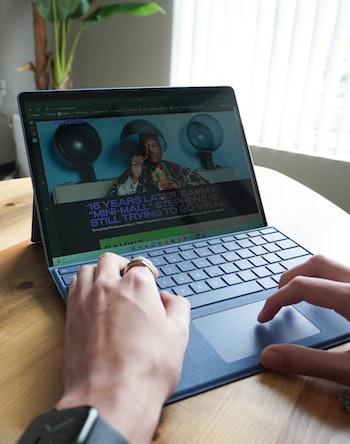 Microsoft celebrated the 10th anniversary of the Surface by keeping things largely the same.

There’s a lot to like about the Surface Pro 9, but unfortunately little that’s technically new, especially when the biggest change — the option to spec the 2-in-1 with a Microsoft-designed SQ3 Arm chip — wasn’t included in the review unit I was sent to test. So what’s left isn't going to feel particularly exciting: the Surface Pro 9 comes with the latest 12th Gen Intel Core processors, two new color options, and loses the headphone jack (just like on the Surface Pro X).

But using the Surface Pro 9 is still deeply satisfying. I normally switch between an M1 MacBook Pro and an iPad Air to do almost everything for work. The iPad Air is great for reading, researching, and taking the notes that will end up in an article or review. The MacBook Pro works well for actually typing those articles up and editing photos to go with them.

As a first-time Surface Pro user, it was really great to consolidate my two-device workflow into a single-device one. The Surface Pro 9 is wonderful for taking notes and outlining ideas using the Slim Pen 2 and one of Microsoft’s various note-taking apps (I currently prefer Journal but apparently OneNote has a inking-focused update on the way). And with that pen docked in the Surface Pro Signature Keyboard and the kickstand out, the Surface Pro 9 offers a really pleasant typing experience, too. Also, unlike iPad Pros, it was nice not having to give up desktop applications with the tablet-keyboard form factor.

So big picture, the Surface Pro 9 remains a winning product, but if you’ll allow me to nitpick, here’s what works and doesn’t about Microsoft’s latest 2-in-1.

The new Surface Pro 9 isn't a dramatic change from last year's models but does come with the latest 12th Gen Intel Core processors.

Essentially the Type Cover with an added slot for charging the Slim Pen 2 stylus. It's the best way to type on the Surface Pro 9 — a must have.

The best of the Surface Pro 9

At this point, the Surface Pro form factor is mature, and the major breakthroughs Microsoft made with the Surface Pro 8 are all present in the Surface Pro 9. The 13-inch PixelSense Flow touchscreen looks great and has a 3:2 aspect ratio; support for HDR and a 120Hz refresh rate (you can choose between 60Hz, Dynamic switching, or 120Hz) are cherries on top.

Better yet, the Surface Pro 9 comes in attractive colorways like sapphire, forest, and graphite — all of which cost $1,099 for the privilege. The $999 entry-level Surface Pro 9 only comes in platinum, though you can, of course, customize any model with different colored keyboard covers (sold separately for $179.99 each).

Either way, more options are welcome. Seeing as Apple only sells the M2 MacBook Air in three metallic finishes and a smudgy “midnight” blue color, it's good that Microsoft is picking up the torch for colorful computers. The sapphire blue Surface Pro 9 I've been testing is a few shades darker than the current blue iPhone 14; it’s lighter than I'd prefer, but it's a playful color and doesn’t show fingerprints very much at all. Personally, I think "forest" green looks the best.

The rest of the Surface Pro 9 is familiar. There are two Thunderbolt 4 (USB-C) ports on the left side, a Surface Connector for charging/docking on the right, and the good ol' kickstand in the back (which also hides easy access to the removable SSD storage). The only two buttons on the device are the power and volume buttons that run along the top left of the 1080p Windows Hello webcam. Annoyingly, the volume buttons always work in portrait orientation (where up/left is volume up in Windows 11) and there’s no default way of changing it, but otherwise the Surface Pro 9 is a very elegant 2-in-1.

Inside, the Surface Pro 9 has the same upgrade every other Windows PC got this year: 12th Gen Intel Core processors. My specific review unit has a 12th Gen Intel Core i7 which was more than enough to get through my daily work tasks. I never had any issues with the number of Edge tabs I had open or running Slack in the background, though a lot of tabs (10+), Slack, and a Zoom call did get the Surface Pro 9 to warm up and get the fan going. It was never too hot to handle or touch, but it can get toasty if you push the CPU or GPU.

Similarly, I wouldn’t buy a Surface Pro 9 as a gaming device, but with a Core i5 or i7 inside, it is feasible. For lighter indie games I downloaded from Itch (I’ve been enjoying Slipways) the Surface Pro 9 didn’t break a sweat, but as soon as I loaded up something more graphically intensive, like the zoo simulator Planet Zoo off Steam, the fan kicked in and things were best left on low or medium graphics settings to avoid issues. The obvious alternative to running games on-device (or not being able to with the Iris Xe Graphics) is to just stream them with a service like Xbox Cloud Streaming. The software comes pre-installed on the Surface Pro 9. The Game Bar feature in Windows 11 makes it easy to switch to a recently streamed game with just an Xbox controller, and I never ran into an issue even over my middling Wi-Fi.

I mentioned at the beginning that the Surface Pro 9 also comes in an Arm CPU model. This custom silicon collaboration with Qualcomm was first introduced in the Surface Pro X, and is finally making its way to the mainline Surface Pro 9. If you're willing to deal with a higher starting price of $1,299, you can get the 2-in-1 with the Microsoft SQ3 chip, which has exclusive AI-enabled video features and built-in 5G. However, looking at reviews, the Intel Surface Pro 9 seems to be the superior model; Windows on Arm sounds like it’s still a mess if you use anything other than Microsoft’s apps.

The Surface Pro 9 appears to use the exact same speakers as the Surface Pro 8, but I want to highlight them again because they’re just that good. The 2W speakers on the Surface Pro 9 are Dolby Atmos compatible and impressively loud. Sound is clear, deep, and I’d venture to say TV quality; any show that's mixed with Atmos in mind really shines.

I had just as enjoyable a time — kickstand popped out and speakers blasting — watching episode eight of Andor and a few episodes of Guillermo Del Toro’s Cabinet of Curiosities as I would have in my living room. If you're a college student who doesn't own a TV but uses a laptop, the Surface Pro 9 is absolutely the way to cover both bases.

Another feature that’s technically not new but I really appreciated was the haptic feedback in the Slim Pen 2. The Surface stylus is far superior to the Apple Pencil 2 for its dedicated eraser alone, but getting the slightest bit of feedback anytime I wrote went a long way to making writing more enjoyable on the Surface Pro 9. Does it actually feel like writing on real paper as Microsoft suggests? Absolutely not. But is it very pleasant to get the slightest buzzy resistance any time I scribble something? Totally.

The worst of the Surface Pro 9

Notably missing from the Surface Pro 9 is the headphone jack. I understand it’s not “cool” to have wired headphones in 2022 (though huge swathes of TikTok would beg to differ) but not including a headphone jack in a device designed to replace a laptop is wrong. Maybe it's acceptable to not have a headphone jack on an iPad or any tablet that doesn't run a proper desktop operating system. But the Surface Pro 9 runs Windows 11 — proper x86 apps and all — so there's really no excuse.

1. Battery life could be longer

Microsoft estimates that the Surface Pro 9 can last up to 15.5 hours under mixed usage conditions which include web browsing on Edge, using productivity apps in the Office suite, and just leaving the device in standby. I’ve never found the way I work to fit any computer maker's very specific battery benchmarks, so unsurprisingly, I never got the advertised hours. Doing basic word processing in Google Docs, web browsing in Edge, messaging in Slack and Discord, and music streaming through the Apple Music web app (look, I’m not proud), I easily got through a day of work and then some — in total about 12 hours of battery on a single charge. That’s pretty good, but I’d like to see battery life that outlasts an M1 MacBook Air.

As you'd expect, battery life will take a hit at varying rates as soon as anything more CPU or GPU heavy — like watching a show or playing a game — gets tossed into the mix. Playing Planet Zoo for my tests, I went from 86 percent battery to 56 percent battery with just 20 minutes of gameplay. Streaming TV through the HBO Max app in bed a few nights ago, sound blaring and screen brightness sitting at 85 percent, I saw a similar dramatic drop of 20–30 percent battery over the course of an hour. However powerful the 12th Gen Intel Core i5 or i7 chips are at getting work done, they’re still not as power efficient as Apple’s M1 or really any other Arm chip. That’s why making custom Microsoft silicon work is still such a pressing issue for future Surface devices. They need to be powerful and power efficient to be as adaptable to people’s mobile lifestyles as Microsoft clearly wants them to be.

The Surface Pro 9 seriously makes me consider leaving Apple’s walled garden. It’s a delightfully polished laptop-replacement that's truly useful. I can get work done, play games (more than on any Mac at least), and not need a separate tablet to get my touchscreen and stylus fix.

The Surface Pro 9 is a Microsoft victory lap.

I wish Microsoft had been more adventurous — it could have blown us away with extra-long battery life or thrown in more ports instead of removing them — but I really can't complain with what we got with the new colors and 12th Gen Intel Core processors. The Surface Pro 9 is a Microsoft victory lap and proof that the form factor is so polished it can remain the same for another year.