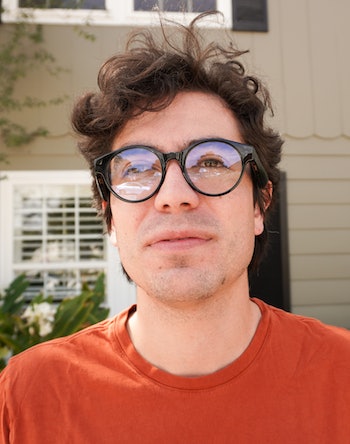 Razer is not the first company that comes to mind when you picture smart glasses.

The company makes great gaming laptops, keyboards, headsets, and more — for better or worse, typically crammed with RGB lights or a snake motif. And Razer usually isn't afraid of making products "for gamers, by gamers" like the controversial Zephyr air purifier mask.

So it was somewhat surprising to me that the Razer Anzu smart glasses (or "Bluetooth sunglasses" as they're marketed) lack any gamer-centric aesthetic. The smart glasses offer blue light protection, open-ear audio, and an “industry-leading 60ms low latency Bluetooth connection,” but otherwise aren’t bringing anything groundbreaking to the face-worn product category. The Anzu work as advertised and qualify as gamer-adjacent gear, but Razer could and should have gone beyond an easy $199.99 cash grab.

A pair of smart sunglasses with gaming-focused features like low-latency audio and blue-light filtering lenses.

The Razer Anzu look like knock-off Ray-Ban sunglasses. That’s not a terrible thing! If you want to make smart glasses that many people will feel comfortable wearing, they should look familiar. Whether you choose round or rectangle frames, the Razer Anzu has options.

Razer offers the Anzu in either small/medium or large, and ships either the rectangle or round frames with your choice of blue light or polarized lenses. Razer claims the Anzu filter 35 percent of blue light from screens, but I can’t say it really reduced any eye strain when I gamed continuously. The Razer Anzu are also compatible with Lensabl’s replacement lenses so you can theoretically buy prescription lenses and pop those in as well. The process of swapping in new lenses requires a fair bit of force, will smudge your lenses, and definitely made me worry I was going to break the lenses. That said, any amount of customization is welcome in the realm of eyewear.

Wearing the Anzu is a comfortable experience. Much like the Echo Frames, Razer designed the Anzu to fit a wide range of head shapes and sizes. Thanks to flexible hinges on the Razer Anzu, the fit has some wiggle room and hugs your head without digging into the sides.

Like the Soundcore Frames, the Razer Anzu charge with a split cable that plugs into both temples. The battery life ended up falling in line with Razer's promised 5 hours of listening. Split up over the course of a day, that usually got me through work before dying at around 8 p.m. the same night.

Overall, I appreciate the simplicity, but it’s a shame Razer isn’t bringing as much to the table compared to the similar Soundcore Frames. The Razer Anzu are even more limited in some ways. For example, there’s no way to raise the volume on the smart glasses themselves without fishing out your phone or calling up a voice assistant. It’s bizarre because there are options for just about everything else, like answering or hanging up a call, playing, pausing, or skipping tracks, and even enabling Gaming Mode.

Compromised controls are particularly annoying because it means you’ll have to interact with the very unreliable touch sensors on both sides of the Anzu. I’m not sure if the touch-sensitive areas are too small or the sensors themselves are tuned wrong, but it’s really hard to know if your taps are going to do what you expect them to do. And the glasses only accept taps. Despite swipes and double swipes being a fairly common way to control smart glasses, the option simply doesn’t exist on the Razer Anzu.

I think I could set aside hardware quirks if there were simply more style options available for the Razer Anzu. The two frame shape options are fine, but their glossy plastic finish means they collect fingerprints like nobody's business and look cheaper than they actually are. They also don’t do a great job of hiding that they’re smart glasses. The temples are very thick; they have visible holes for microphones and speakers; and there’s a telltale Razer logo (thankfully without the brand's snake emblem). It’s easy to tell there’s something up with these smart glasses.

The Razer Anzu aren’t as rich or layered as the Soundcore Frames (which often sound as good as wireless earbuds), but they do get just as loud. Similar to the Echo Frames, the Anzu sound very clear at lower volumes, so you’ll probably never have to crank the speakers all the way up to get a good experience.

There are three EQ settings for the Anzu, but you’re best leaving it on default because “Enhanced Clarity” and “Treble Boost'' don't seem to do much. Enabled in the Razer Audio app, they mainly seem to drop out the low end and raise the mids and highs. In practice this means you lose any sense of bass, but voices in podcasts do sound a bit clearer (emphasis on a bit) to my ear. It’s a real missed opportunity there’s no custom EQ option.

The real star audio feature is “Gaming Mode'' which Razer claims will lower the latency of audio between a game and the Anzu speakers. Audio latency is a top reason why gamers — especially professional ones — prefer wired headsets instead of wireless ones. In the Anzu's case, Razer says the Bluetooth connection has an "industry-leading 60ms low latency Bluetooth connection" so that in-game audio sounds almost instantaneous. I did notice a small reduction in audio lag in Shovel Knight Dig when Gaming Mode was enabled, but I doubt it's enough of a difference to improve your game if you’re playing a shooter or a rhythm title. Gaming Mode is purely nice to have, but not necessary. (The default latency isn’t that bad as it is.) Besides, anybody who's serious about gaming probably isn't choosing smart glasses as their preferred headphones.

The Razer Audio app is as simple as simple comes. You can connect the Anzu (oddly, after connecting them in the app you still have to do the same thing in your phone's Bluetooth settings), toggle features like Gaming Mode, and update the firmware of any Razer audio accessory that’s connected.

Other than that core functionality, the only section in the app worth highlighting is the one for trying out gestures. Essentially, you can practice using the Razer Anzu’s finicky touch controls to make sure you’re doing them right. If that’s not an indication that the controls are too hard to use (or perhaps poorly designed), I don’t know what is.

As comfortable and presentable as they are for Zoom, I wouldn't describe the Razer Anzu as cool. Because of the plastic finish and the chunky temples, they don’t scream premium and they also don’t entirely look like traditional glasses. There are worse offenders in terms of style (the Echo Frames come to mind), and ultimately it’s a matter of taste, but I wouldn't wear the Razer Anzu out on a regular basis.

I wanted to love the Razer Anzu, but having tried other open-ear audio smart glasses like the Echo Frames and Soundcore Frames, the average audio experience doesn't justify their typical $199 price. Razer frequently discounts its smart glasses so there's a good chance you won't have to pay full price. I personally wouldn't pay MSRP since the Anzu originally launched in March 2021.

At the end of the day, unless you're committed to the Razer brand or really curious about low-latency audio for gaming, there are far better audio-focused smart glasses available. Razer did the bare minimum with the Anzu and it shows.