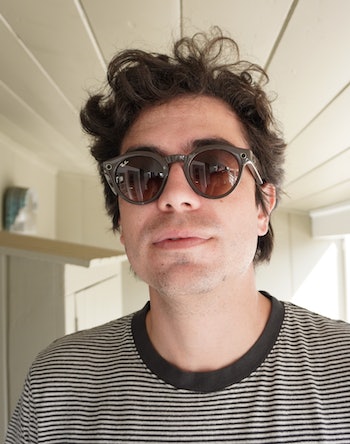 Meta did it: Ray-Ban Stories are the best smart glasses you can buy in 2022.

Regardless of how you feel about Meta and its goal of building “the metaverse,” the company has proven itself to be deeply committed to making augmented reality and virtual reality hardware accessible. Mark Zuckerberg has opined on many occasions that the Quest 2, new $1,500 Quest Pro, and Ray-Ban Stories form factors are merely stepping stones to a pair of AR/VR smart glasses that converge mixed reality technology with the compactness of glasses.

Ray-Ban Stories are the best smart glasses, not because of their price ($299 is on the pricey side compared to regular $163 Wayfarer sunglasses) and not because they do any XR (they don't). The two cameras also open up privacy questions that the average glasses wearer never has to think about. No, Ray-Ban Stories are the best smart glasses because they're easy to understand (there are buttons); they look familiar, thanks to a partnership with EssilorLuxottica; and they are actually fun to use throughout the day.

If you can set aside the price and the camera privacy concerns, the Ray-Ban Stories are the most polished take on a stylish and tech-packed gadget for your face, and maybe what your first (or next) pair of smart glasses could look like.

Co-developed with Meta, the Stories smart glasses have two-cameras for shooting photos and videos, and speakers for open-ear audio.

Perhaps unsurprisingly, Ray-Ban made a pair of Ray-Ban smart glasses. EssilorLuxottica, the owner of Ray-Ban, is a gigantic eyewear and eyecare company but the Ray-Ban brand is probably its most iconic, thanks in part to their distinct frame shapes and ever-growing list of celebrities that wear them.

By making the Ray-Ban Stories look like a pair of Ray-Ban glasses (in Wayfarer, Round, or Meteor frames) Meta doesn't need to sell anybody on fashion — they're already cool from the jump. I can't overstate how advantageous it is that Ray-Ban Stories look and feel like normal glasses.

In terms of hardware, the hinges on the Ray-Ban Stories are less flexible than other smart glasses like the Echo Frames or the Razer Anzu. They’re also ever so slightly heavier, though not enough to be annoying. The temples are also thicker to house the high-tech internals and touchpads on either side, but not so chunky that they'll make anyone think twice. The two 5-megapixel cameras on the front can pass as decorative elements unless you’re really looking; it's a stark contrast to Snap’s Spectacles, which “celebrate” the camera. The Spectacles 3 draw attention to the camera with raised rims and circular flashing lights.

There’s a switch on the left that easily blends in with the inner hinge, speakers along the bottom that are colored-matched with the frame (I chose green), an LED on the right side (also near the hinge) to tell you if the Ray-Ban Stories are connected or if the battery is low, and a shutter button on the top-right temple for taking photos or videos. Even the charging connector that magnetically docks into pogo pins in the case is hidden when the smart glasses are unfolded.

The battery lasts about 5 hours with casual use throughout the day (Meta estimates six) but what’s great is the charging case has three additional charges. That extra battery life in the case does mean it’s too thick to fit in your pants, but jacket pockets can probably accommodate it. The added battery can extend the Ray-Ban Stories longer than you think, though capturing photos and videos draw more power than listening to music or a podcast.

Meta really has thought of all of the important details. It seems on some level the company knew it would have to avoid the “glasshole” problem and it’s done an admirable job avoiding that while also making the Ray-Ban Stories easy to use. The smart glasses connect to an iPhone or Android phone via the Facebook View app (oddly it hasn’t been rebranded to Meta) which connects and updates them over Bluetooth.

Any audio on your phone will play through the Ray-Ban Stories speakers; you can use swipes to control the volume, taps to answer or hang up calls, press the top button to capture photos and videos, or talk to the built-in Facebook Assistant to do all of these things hands-free. While shooting photos or videos, there’s an accompanying LED light (and brief audible capture sound) on the outside of the glasses so people know that you’re recording. After you’re done, you just open up the Facebook View app, add whatever photos or videos you want to download from the smart glasses, and everything gets transferred via a local Wi-Fi network the View app makes for just the Ray-Ban Stories and your phone. It really works well.

Meta is clearly more interested in the potential of its cameras than its speakers, but to the Ray-Ban Stories' credit, they sound really good. Audio is full and clear, not distorted at high volumes (these get loud), but also not as rich and layered as the Soundcore Frames. There are only two “open air” speakers and a three-mic array for calls or talking to Facebook Assistant, so the Ray-Ban Stories aren’t packed with audio equipment, but they work well. Audiophiles will still want real headphones; everyone else might be pleasantly surprised.

The two cameras on the Ray-Ban Stories are similarly good, but I wouldn’t expect to shoot a billboard ad with them. The camera quality is probably similar to the iPhone 4 (yes, the 4, not the iPhone 14); they perform great in good light, poorly in low light, but otherwise reproduce colors in a natural way.

At five megapixels each, captured media seems designed for social media, and Meta’s made it very easy to share them from the View app directly into Facebook or Instagram. Photos (2,592 x 1,944) and videos (1,814 x 1,814 at 30 fps) resolutions leave a lot to be desired, but the smart glasses make up for this deficiency with spontaneity. I’m not convinced that first-person video is the way of the future, but it is convenient to capture a picture easily with just my voice or a long press on the shutter button. Ditto for recording a 30-second video with a single press on the same button.

A video taken with the Ray-Ban Stories.

The Facebook View app is as straightforward as the smart glasses it’s paired with. Besides the usual ability to sync, update firmware, and adjust settings like device sounds and notifications, the View app is mostly a tool for processing footage you capture on the Ray-Ban Stories.

The main page is a library of every photo or video you’ve captured on the device (you can sort it by images you’ve favorited as well) with a button in the corner for syncing photos between the Ray-ban Stories and your phone. Tapping on a photo or video opens up a bunch of editing features, including the ability to view what it'd look like in an Instagram or Facebook Stories vertical video aspect ratio. There are also other common tools for trimming and cropping, adjusting brightness and saturation, and the ability to build a montage from photos and videos.

The editing features aren’t as in-depth as what you’d find in the Instagram app, but that’s sort of the point. You touch up what you want here and save it to your personal library or tap a button and immediately switch to the Instagram Stories editor for more complicated changes. The Facebook View app is really more of an intermediary.

On the topic of software, the ugly duckling of the bunch has to be Facebook Assistant. With a quick “Hey Facebook” you can access basically all of the Ray-Ban Stories' functionality, but you’re not getting the full Alexa or Siri experience here. The Facebook Assistant is much more like Samsung’s Bixby was originally designed to be, a tool for using your device hands-free, not necessarily a do-everything AI with access to web search or any meaningful intelligence. It’s definitely the area where the Ray-Ban Stories have the most room to grow (I also really don’t like saying “Hey Facebook”) but as it exists now, it works well.

The Ray-Ban Stories gets closest to passing with flying colors compared to the Amazon Echo Frames, Soundcore Frames, and Razer Anzu smart glasses I tested. I felt cool wearing them — I generally feel cool wearing Ray-Ban glasses — and rarely self-conscious of what I was using them for. And unlike its competitors, it’s also fairly easy to wander into a glasses shop in a mall and actually try the Ray-Ban Stories for yourself.

Other than the latent discomfort of carrying around a camera on your face which is no small thing, they feel as comfortable and as helpful as I imagine smart glasses should. Ray-Ban Stories are a real taste of the future.

The difficulty with liking the Ray-Ban Stories so much is that I’m not sure I can recommend them. They cost $299, and that’s before you add a prescription. Now, buying glasses from Ray-Ban is rarely a small purchase, but when a typical pair of glasses costs over $100, it’s hard to completely justify the jump to nearly $300. Meta has supported these smart glasses well and seems committed to the space and form factor, but buying in now might not make the most sense considering they came out in September 2021.

And since the Ray-Ban Stories have cameras and they’re made by Meta — a company that doesn’t have the greatest privacy track record — it’s natural to worry about privacy and security. Thankfully, Meta has no access to any of your Ray-Ban Stories media without your consent and doesn’t use anything you capture to create personalized ads. You can choose whether or not you want to share additional data about how often you use the Facebook View app in settings and you control whether or not Meta can save recordings made for Facebook Assistant voice processing. Once anything is shared from the app to another social network, those different privacy rules apply. Nut in the View app, your information is secure. Whether you trust Meta is really a personal matter, though.

However polished, this is a first-generation product, one that will likely improve in features and price in newer models. After all, EssilorLuxottica and Meta have committed to making more smart glasses together. If you have the money, you can buy them now and get a pretty great experience, but if you’re willing to wait, it might get even better next year.