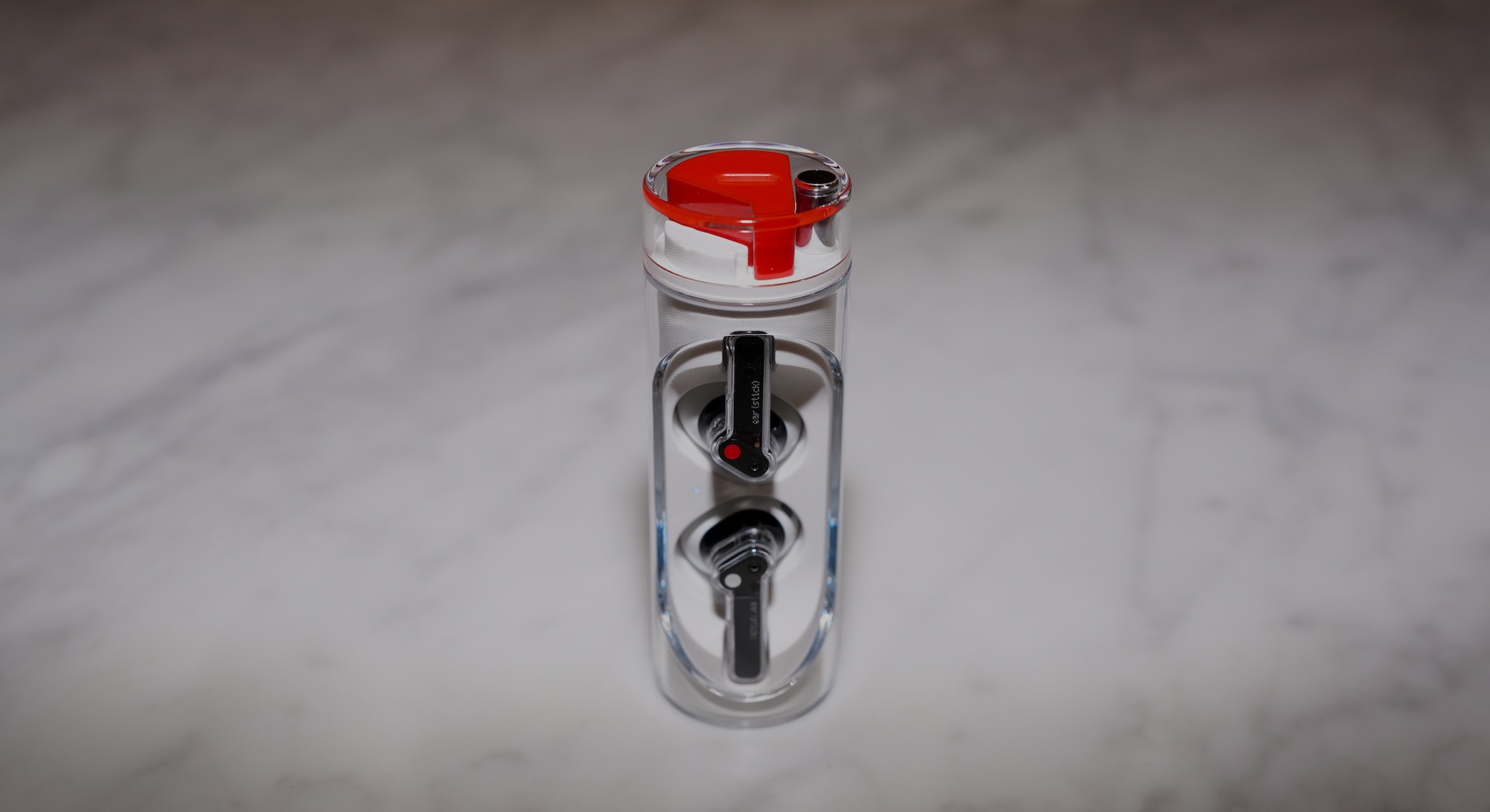 Plenty of companies have the acumen to make good products, but Nothing knows — even in the wonk-filled world of consumer tech — that practicality isn’t everything.

Take its fascination with transparent design, for example. Was it easy to build a pair of wireless earbuds with visible circuitry? The short answer is no. In fact, according to Thomas Howard, vice head of design at Teenage Engineering, which helped design the Ear 1, making a see-through product was nothing short of a giant pain in the ass. Watch this video if you don’t believe me.

But Nothing, particularly its founder, Carl Pei, knows that there is no price (literally or otherwise) on intangibles. Audio is just the pretense for Nothing’s wireless earbuds to exist. Cultivating a sense of cool is the mission.

Sometimes that means breaking your back over which type of glue is least visible. In the case of its latest wireless earbuds, the Ear Stick, it means another thing: lipstick.

Nothing Ear Stick
Nothing

Even without active noise cancellation, the Nothing Ear Stick are great.

Beauty and the beats

Without a doubt, the first thing anyone will notice about the Ear Stick is its charging case — though, honestly “case” in this particular context doesn’t even feel like the right word. Nothing’s Ear Stick is tubular. Literally.

The charging tube for Nothing’s Ear Stick is actually inspired by lipstick according to Pei, and if you had any doubts about its origins, there’s a nice pop of red at the top to hammer the point home.

The tube isn’t just shaped like a lipstick applicator, it’s tactile like one too. Every time you twist the case open to retrieve your buds, the motion ends with a satisfying click. The ritual gives me enough dopamine to reconsider taking the buds out. Who wouldn’t want to hear that click just one more time?

The buds themselves are aesthetically similar to the Ear 1 aside from the elimination of a silicone ear tip. In lieu of a tip, the Ear Stick has a smooth bean-shaped shell that nestles into your outer ear.

As someone who has struggled time and time again, to find tip-less wireless earbuds that reside comfortably in my ear, I’m pleased to report that the Ear Stick, well, sticks. I even gave them a few vigorous shake tastes at the risk of damaging my neck and the buds. My spinal cord and buds are both unscathed.

(Note: obviously ear fit is a deeply personal thing, so what works for me may not work for everyone.)

That’s the intangible Nothing effect. That’s the product.

This is all to say, in my opinion, that the Ear Stick, like the Ear 1, just looks cool. In a world absolutely inundated with Apple’s ubiquitous snow-white AirPods, the Ear Stick makes a visual statement. As an owner and advocate of the Ear 1, as well as a frequent user of New York City’s mass transit system, I know for a fact that the Ear 1 design elicits curious looks. The Ear Stick, I suspect, will do the same.

If you’re a fan of Nothing, you know that Pei wants its products — and by extension you — to look and feel different. That’s the intangible Nothing effect. That’s the product.

But if you’re in the market for wireless earbuds, maybe looks aren’t enough for you. Cool factor gets Nothing in the door, but technological savvy has to do the rest.

If there’s one thing that you need to know — from a technical perspective — about the Ear Stick, it’s that they do not have active noise cancellation (ANC).

For some people, that will be a dealbreaker, but for others, maybe not. As someone who has been using the Ear 1 for more than a year, it was admittedly hard to go back to buds without ANC. But whether you can live without that buffer between you and a noisy New York City subway will ultimately be your choice.

That being said, the Ear Stick does — at least in my experience — allow quite a bit of environmental sound to bleed into my listening sessions. I suspect the lack of buffer is partially due to the design. Unlike tipped wireless earbuds that fit flush against the outer ear canal, there’s a lot more room for external sound to wiggle its way in. On one day of testing, I wore the Ear Stick for several hours while working and was able to have full-on conversations with people in the room while also listening to (albeit soft) music.

This is just life without ANC. If you want more immersion, you’ll now have to pay $50 more for the first-gen Ear 1, which was previously priced at the Ear Stick’s starting MSRP of $99.99. Pei says the price hike is the product of supply chain and various software updates that have made the Ear 1 a better product than it was at launch.

The noise bleed says nothing of the sound quality, however, which in my opinion, is excellent for the Ear Stick’s price range. In various genres and calls, the sound is both robust and dynamic. But quality, in the case of the Ear Stick, is only half the appeal. Thanks to Nothing’s companion app, Nothing X, you get granularity too.

Through Nothing X, you can adjust the wireless earbuds to amplify treble, bass, and even voice quality for when you’re chatting on the phone or Zoom. If you’re even pickier, you can customize an equalization yourself.

Beyond being useful, Nothing X’s creative UI (the blob-like controls seen above) makes it flat-out fun to experiment: what if Daft Punk got more bass; maybe Broken Social Scene needs a boost of treble. Subtleties like this aren’t just extras, they’re actually what give Nothing an edge.

The same level of whimsy creeps its way into the Ear Stick’s new touch controls — or squeeze controls, I should say. Unlike the Ear 1 buds which could be controlled by tapping the outside of the buds (to sometimes frustratingly ill effect) the Ear Stick can pause/play, skip songs, and control volume with different squeezes.

To pause, give the left or right stem one subtle squeeze; to skip forward to the next song or decline a call, give the stem two squeezes; a triple pinch skips back; a long pinch on the right stem sends the volume up, while the same on the left lowers the volume.

At first, the pinch and squeeze commands felt downright wrong. Why not just make taps better instead of throwing the system in the trash? Not to mention, squeezing a device that is sometimes precariously perched in my ear felt a little nerve-wracking.

But several hours into using the Ear Stick, my trepidation actually turned into enjoyment. Once you get the hang of your new squeezing lifestyle, the Ear Stick actually becomes more like an extension of your body. If you’re feeling hesitant about the Ear Stick’s squeeze controls, my advice is to give them a minute. They’re like sprouting a new limb — weird, but potentially useful.

On a more practical level, the Ear Stick is just solid hardware. I took multiple calls on Zoom, and fellow attendees reported that my audio was crystal clear. Battery life even seemed to exceed Nothing’s reported specs of 7 hours outside the case. After about 4.5 hours of consecutive use, Nothing X reported that the Ear Stick had about 50 percent battery. With the case, Nothing says the wireless earbuds get a formidable 29 hours.

If you’re interested in all the tech specs, they’re as follows:

Is cool worth the cost?

Designing something that’s meaningfully mold-breaking is a dangerous game. That goes for artists and engineers in any category, but doubly for those carving their way through the crowded world of consumer tech.

Nothing, and Pei, saw an opportunity in the liminal space of form and function, and they took a leap. They now have three successful products to show for their efforts. That’s a win for Nothing, but also a win for anyone, who like Pei, looked at the vastness of product design in tech and sees atrophy, not progress.

If you just need a pair of wireless earbuds, maybe that won’t matter to you, but if you like technology and the magic it sometimes casts on our day-to-day lives, consider buying an Ear Stick a down payment on a tech future that’s as exciting as it is useful.