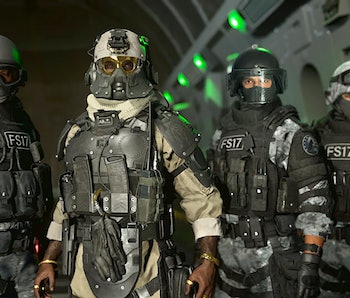 As expected, the newly released Call of Duty: Warzone 2.0 comes with a host of changes from its predecessor. One of the most notable differences is the way looting works, which is way more complex than before, mostly due to the new inventory system. This new looting system is — at least on paper — quite compelling but in practice is far too clunky for its own good. But what makes grabbing gear so lackluster, and can anything be done to make it better?

Looting is sluggish and clunky

In the original Warzone, players had a very limited selection of items to manage at any given time. You had access to your weapons, lethal and tactical equipment, along with a Field Upgrade, and that was pretty much it. Sure ammo and gas masks were featured, as well, but their implementation was so straightforward, there wasn’t much you needed to do in terms of management.

Because of this, the process of looting in the original Warzone was fast and intuitive. Picking up a weapon would swap it for the one in your hand, cash would go into an endless pool, and once you acquired ammo or a gas mask, there wasn’t anything else you needed to do. It was easily one of the most streamlined aspects of Warzone, making it easy to grab your items and move on.

In Warzone 2.0, however, everything is wildly more complicated due, in part, to the new inventory system. Players now have a backpack with limited space — and those slots are shared across most items you pick up. This is somewhat of a double-edged sword, meaning you can now have more of one type of item at any given time (like three stims or four stacks of armor plates), but it also makes the looting process less practical during the heat of battle.

At first, you simply need to interact with an item to place it in your inventory, but once you run out of room, you have to manage your slots by swapping out the things you don’t need as much. Much like in an RPG such as Fallout, it takes a bit of time to decide what you should keep, and what you should discard. While it’s nice to have so many options, it does slow things down tremendously. Moreover, the process of looting an eliminated player is equally as time-consuming.

In practice, this new system makes for a more sluggish looting process, which is particularly troublesome when you’re in the midst of a battle. In the original Warzone, split-second looting decisions could make or break encounters, such as quickly grabbing a gas mask or stim to make a last-minute gas play to come out on top.

But in Warzone 2.0, this tactic is far less practical, as you’re likely to have a stacked inventory at the end of a match — increasing your chances of getting taken down while looting. In a way, you’re better off not looting at all toward the end of a match, especially during intense, fast-paced battles.

But the looting issues aren’t only caused by the clunky inventory. The default setting requires you to press and hold a button to pick up an item, which takes up even more time. That’s why we recommend going into your Controller settings to change the Interact/Reload Behavior to Prioritize Interact, which allows you to simply tap a button instead of holding it. It’s baffling that Prioritize Interact isn’t on by default.

It’s clear the entire looting system needs an overhaul. Warzone 2.0 doesn’t need to get rid of the inventory and backpack mechanics entirely, but a more streamlined way of managing items would certainly improve the pacing. Perhaps bumping up the overall time to kill (TTK) might help, allowing players more time to react, even if they’re fumbling through menus.

As it stands, it doesn’t make sense that such a fundamental aspect of this battle royale experience feels so wrong.

More like this
Gaming
10 hours ago
The Most Approachable Warzone 2.0 Feature Makes It Less Fun
By Joseph Yaden
Gaming
Feb. 1, 2023
Modern Warfare 2 Season 2 Release Date, Ashika Island, and Warzone 2.0 Updates
By Joseph Yaden
Gaming
Jan. 24, 2023
How to use the weapon triangle and 5 more combat tactics in Fire Emblem Engage
By Robin Bea
LEARN SOMETHING NEW EVERY DAY.
Related Tags
Share: