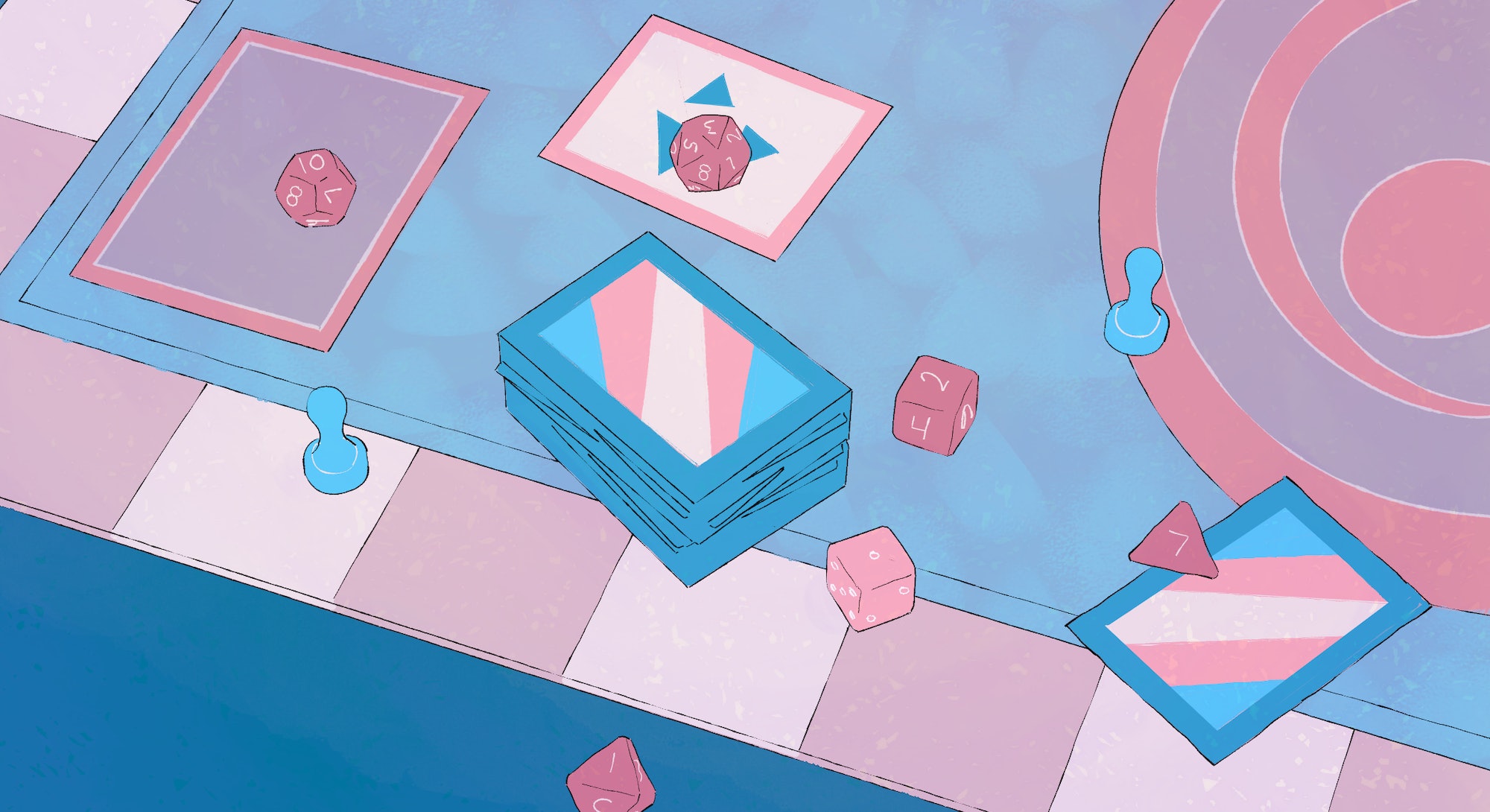 It’s all too common these days: You hear some terrible piece of news and think, I wish I could help, but I’m just one person.

Instead of stewing in that feeling, Dickey got to work organizing a charity tabletop RPG bundle on the online game storefront itch.io.

“My first gut response was to feel rather helpless. It's so far away, and I can't possibly go help the trans kids there as a single person,” Dickey tells Inverse. “I really admire the work itch has done with bundles for racial justice, for Palestine and Ukraine. So I thought, maybe I can do that for the trans community in Texas.”

The next day, they put out the call for game designers to donate their games to a charity fundraising bundle.

“The tabletop community on Twitter is super interconnected, which is nice when you need to get the word out about something. I made the original post in the middle of the day on Thursday and it had several hundred retweets by the time I got home for dinner,” Dickey says.

By Monday, February 28, creators had donated 493 tabletop games and supplements. With a minimum donation of $5, the TTRPGs for Trans Rights in Texas bundle launched with a modest goal of $1,000 and a $10,000 stretch goal.

Three weeks after the bundle’s launch, it has raised more than $300,000 to be split between Organización Latina de Trans en Texas (OLTT) and Transgender Education Network of Texas (TENT). That figure is still growing, and the bundle will be available until April 3, with a new goal of raising $420,000.

Inverse spoke to Dickey about transforming helplessness into action, how people can support trans kids where they are, and why tabletop RPGs are more than fun and games.

What charities are you supporting with the TTRPGs for Trans Rights in Texas bundle?

Organización Latina de Trans en Texas is a trans-led, trans-centered charity that runs shelters and long-term housing for immigrant trans folks, and also at-risk and homeless trans folks. They also have legal aides on hand to help with name change paperwork or the immigration process. Name change paperwork and immigration paperwork, not counting lawyer fees, is about $1,000. So that's 150 trans folks who can get their legal names and immigration paperwork processed through OLTT. That's a huge amount of good, not even counting the other things these organizations do.

The Transgender Education Network of Texas is a an education group that works from small community classes all the way up through the Texas Legislature to counteract negative stereotypes and conspiracy theories about trans identity. They work to educate the greater Texas populace about trans people and make Texas safer for trans folks, by way of letting Texas know that trans people do live here and that they also deserve just as many rights as everyone else. Since the start of the pandemic, TENT has also offered emergency grants to trans folks in need due to Covid-19.

Why do you think the situation in Texas has galvanized people more than other laws and orders targeting trans people?

A lot of it is mounting concern over transphobic efforts in Florida and Arkansas and other places. As a community, especially the trans folks in the tabletop community, we've been feeling more and more threatened and anxious as various places stripped rights away from trans folks in whatever ways they can. Governor Abbot’s big proclamation was kind of like a hammer hitting an anvil — like, oh, it's real.

There are people in power right now who don't want us to be here. We need to stop this now before it becomes a place where those trans kids don't get to grow up to be trans adults.

A lot of the feedback that I've been hearing is, people are happy for the opportunity to feel like they’re doing something, even if all you’re able to do is retweet it. Knowing that getting more eyes on the bundle or getting $5 into the pot is doing something has really empowered people and made them feel like ‘okay, this is happening, but we can still do something to stop it.’

The knowledge that 40,000 people have come together and donated enough money to change lives is really awe-inspiring. It's restored a lot of my faith in humanity.

“There are people in power right now who don't want us to be here.”

Is there something about the TTRPG community in particular that makes folks more willing to help out?

I'm going to start with a joke. The joke is, most tabletop games have changelings and tieflings and vampires and werewolves. I don't know a single trans person who doesn't identify with one of those in some way.

But in a more serious way, there's something very powerful about a space where you can tell your own story. Tabletop roleplaying, at its core, is about a group of people coming together to tell a story. So often, our stories as trans people, as queer people, as people of color are told by outsiders. The ability to sit at a table and play a trans character as a trans person is empowering and gives you a real sense of being in control of your story.

The tabletop community makes a lot of space for people, mostly because marginalized folks have made that space for us. People like [cast members] Ally Beardsley and Persephiroth on Dimension 20 being supported is a reminder that there is a space for us here and that our stories are ones that people want to listen to.

What can people do to support trans folks outside of this fundraiser?

The most important thing anyone can do is look up the grassroots organizations in your area. At the end of the day, the $25 you give to big places the Human Rights Campaign will not do as much as that same $25 given to your local trans support network.

For older queer folks, look into if the local high school or community center has a space where you can volunteer your time and just come and talk to trans kids, show them that their life doesn't have to be the miserable picture that is painted by a lot of media. That they can thrive and that their stories are important.

“There's something very powerful about a space where you can tell your own story.”

Can you recommend some representative games from the bundle to people who might be new to TTRPGs?

Thirsty Sword Lesbians is a game where you play as queer adventurers and have homoerotic rivalries and tension. In Wanderhome, you play as little pastoral animals defending your home.

Those are two of our really big-ticket games, but we have lots of other really fun and fascinating games. I really like High Magic Lowlives, which is sort of a magic-punk game, where you play as magic users fighting against the rigidly structured class system in the society that you live in.

And Penultimate is a two-player game about romancing death and the intricacies of acknowledging your own death and coming to terms with that while loving the end of things, which I really enjoy.