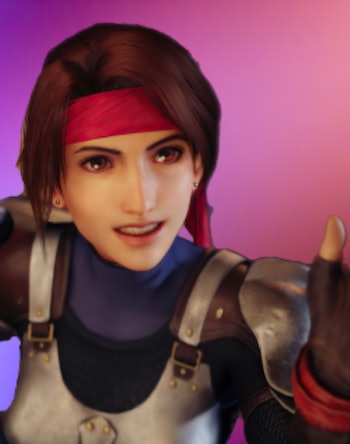 I’ve had a crush on Jessie Rasberry from Final Fantasy VII for more than 20 years.

I’ve struggled my entire adult life to reckon with that infatuation. Why do I adore a mostly neutral side character who dies very early in the story? I may never know. But for Jessie to become a leading lady and this year’s biggest flirt in Final Fantasy VII Remake makes my head spin.

Other characters in gaming this year — like Dina from The Last of Us Part II — come off as flirty and fun-loving in a very human way. The goddess Aphrodite is downright thirsty in Hades, tantalizing Zagreus from atop Mount Olympus. (“Oh, dearest, I suspect we’ll have ourselves a most exciting time together, you and I!”) But 2020’s biggest flirt in gaming is without question Jessie.

FF7 Remake transforms a classic Japanese role-playing game with polygonal character models into a modern-day thirst trap. And it does this by giving Jessie, like everyone else, a really intense glow-up.

Jessie first appears as a wholesome pile of pixels with boob armor in the original. This former actor turned bomb-maker works with party members Barret and Tifa as part of Avalanche, an eco-terrorist group that seeks to undermine the Shinra Energy Corporation. Shinra’s Mako Reactors are draining the planet’s life force, so Avalanche is on a spree destroying reactors with bombs Jessie builds at the start of the game. But Jessie and a few other Avalanche members die around the end of the game’s first act before the real globe-trotting epic adventure begins.

Jessie is only a bit of a flirt in the original game. She’s warm and welcoming to protagonist Cloud Strife, explaining the city layout in one memorable set-piece. But Jessie also pays special attention to him in a way that is clearly flirty in a subtle but also obvious way.

In this, Final Fantasy VII cleverly communicates to the player that the mass of purple polygons topped with yellow spikes (Cloud) is attractive to women like Jessie. We’re taught this valuable lesson before we meet Tifa, his childhood friend and inevitable romantic partner, and long before we get a proper introduction to Aerith, the magical flower girl who gets skewered by the game’s principal villain.

Not only does Remake give Jessie the makeover of the century, but her personality gets a complete overhaul. Gone is the demure engineer who builds bombs to save the world, and in her place is a beautiful and rowdy woman who is lovably extra.

Skimming through YouTube videos, Jessie appears in about 1 hour and 22 minutes worth of cutscenes. One video compiling “all flirting scenes” comes in at just over 29 minutes. So 35 percent of the time we spend with this character, she is trying to hook up with Cloud.

One of the more memorable instances happens during a new Jessie-focused mission that’s not part of the original story. Along with fellow Avalanche members Biggs and Wedge, Jessie recruits Cloud to infiltrate a Shinra facility to steal some materials she needs to build another bomb. (Classic Jessie!) Along the way, Cloud defends the group with his giant sword while riding a motorcycle, all while Jessie clings to his frail (but strong!) body. She offers up a free “reward” that winds up being a kiss on the cheek.

“You can thank me later,” she says. “...I’ll wait.” Jessie is persistent with jokes about being Cloud’s “back warmer,” but she’s also patient.

Later that night, Cloud visits Jessie at her house for the flirtiest moment in the whole game. The “cherry on top” reward Cloud gets for helping her out is a big hug, but then she demands he come over the following night while her roommates are out. The promise might be pizza, but it’s clear what’s really going on here — especially after she calls Cloud “adorable” and offers up a strange wink while sticking her tongue out in a way that evokes ahegao.

She wants to have sex.

Even before you walk away from this lusty conversation, the writing is on the wall for my poor, dearest Jessie. The war between Avalanche, Shinra, and some weird Dementors heats up the following day, and the action kicks into high gear, culminating in a scene where the Shinra corporation levels the entire Sector 7 neighborhood with Jessie in it.

Considering my affinity for Jessie, interviewing her voice actor Erica Lindbeck in May was a revelatory experience. “I was so shocked with how forward she is with Cloud,” Lindbeck said of Jessie’s behavior. “I remember saying, ‘Does she really say this!? Are you serious!?” They were like, ‘Go for it, girl.’ So I did.”

Jessie was the breakout star of FF7 Remake, the thirstiest video game character of the year, and based on some hints from the game’s ending, she just may come back at some point in subsequent games.

I sure hope so.