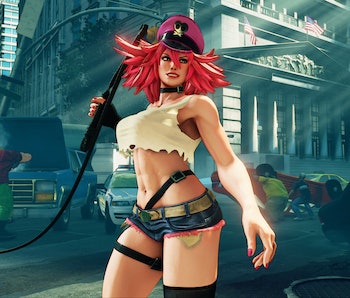 In 1989, Capcom released the beat-em-up game Final Fight. Amongst the numerous enemies players were able to punch and kick were two women named Roxy and Poison. When it came time to port the game to North America, developers thought the idea of beating up women would turn off players, so they had to find a way around Roxy and Poison.

Their first idea was to identify both characters as transgender, because in their minds that made them not women (an incredibly harmful notion). Not even this was enough to save the two girls, as the final American release replaced them entirely with new male characters. But Poison continued to appear in Capcom games, eventually making her way into the Street Fighter series. Yet she has never escaped the problematic jokes and stereotypes that come with being a noncanonical trans character. But in the 33 years since her debut representation for trans people in gaming has made leaps and bounds.

With the release of Street Fighter 6 coming next summer, it is time for Capcom to finally make Poison canonically trans.

Poison was designed to be a cool biker chick. She would appear alongside the character Roxy in 1989’s Final Fight as a minor enemy. The two were color-swapped versions of each other with Poison having the iconic neon pink hair and Roxy having neon orange. The mentality behind their design was to have an enemy that would move about more randomly to confuse the player.

The first instance of Poison being identified as transgender comes from Final Fight designer Akira Yasuda who shared that he wanted to make both Poison and Roxy “newhalfs” to make it easier to beat them up in the game.

For those unfamiliar, “newhalf” is a Japanese slur for transgender women. Interestingly Super Metroid designer Hirofumi Matsuoka used this same slur to describe Samus Aran in 1994, leading to the character becoming a trans icon.

As Roxy and Poison made their way into other Capcom franchises like Street Fighter the debate around Poison’s gender grew larger and larger. But why does the discussion focus on Poison and not include Roxy? In the 2006 Capcom Classic Collection, Roxy is canonically identified as a cis woman, and Poison is referred to as her crossdressing friend. Jokes about Poison’s questionable gender continued as she grew in popularity. Other characters have remarked in-game that she “is not much of a lady” or straight up said that “she’s a man.”

In the Street Fighter x Tekken artbook, Yasuda says that he will always view Poison as cis-gendered in Japan and as a transgender woman overseas. Street Fighter IV producer Yoshinori Ono said that in Japan, Poison “tucks her business away” while in North America she is a post-op trans woman. As far as Capcom is concerned, the publisher continues to have no stance at all, preferring to leave it to fans.

The language surrounding Poison never treats her like a human because of the questions surrounding her identity. Poison is always described as a “crossdresser” or “transexual” and debate continuously revolves around whether she is pre- or post-op. In other words, the debate around Poison focuses on if she has a penis or not.

This discussion centers on the problematic idea that gender identity is defined by a person’s genitals. Furthermore, it feeds the belief that trans women specifically are only valid if they conform to a heteronormative vision of gender and undertake surgery to become a woman. Yet not even that is enough for people as they still view Poison as a man who is pretending to be a woman. Going all the way back to Final Fight this is what made it ok to beat her up, the knowledge that she wasn’t “really” a woman.

Even without being a canonical trans woman Poison remains one of the most iconic trans characters in video games. But this love comes despite the problematic ways Capcom has handled her. With so little trans representation in games over the past 30 years since Poison’s debut, queer fans have had to make do with what we have. The best way to do this is to cling to any media that even remotely gives the LGBTQ+ community representation.

However, this is changing.

Modern video games are slowly creating better representation for trans players. In 2020 two major AAA games featured trans characters in prominent roles. The first was Lev in the Last of Us Part II from Naughty Dog. The other was Tyler in Dontnod Entertainment’s Tell Me Why. While both games had their own flaws in how they told trans stories, they were remarkable for showing a trans story at all. It is something that feels all too rare in an industry with a problematic history of inclusion.

The fighting game genre itself is even starting to work towards preparing its depictions of LGBTQ+ individuals in games. With the release of Guilty Gear Strive, the seventh mainline installment in the franchise, developer Arc System Works has sought to reckon with the series' past. Most recently the team announced that the fighter Bridget will be coming to the game as a DLC character, as well as confirming she is canonically a trans woman. This comes after years of problematic portrayals of the character rooted in a harmful backstory.

But the team is not just saying she is trans and moving on, Bridget’s story in the game shows the character's ongoing journey of coming out. Combined with the non-binary character Testament, fans are flocking to Guilty Gear Strive due to its sensitive portrayal of queer stories. Something that feels like a genre’s natural response to a community that is heavily queer itself, with multiple winners from this year's Evolution Champions identifying as trans and non-binary.

At a time when trans people are the subject of draconian laws in the US, as well as hate campaigns from some of the biggest celebrities in the world, representation is important now more than ever. In addition to giving trans people someone to identify with it also helps normalize the existence of trans people. a GLAAD study from 2020 found that seeing queer representation in media can make a person 20 percent more likely to be accepting of queer people in their own life.

Street Fighter 6 will mark more than 35 years for the franchise that helped revolutionize the fighting game genre. After decades of mistreating Poison and leaving fans to do the work of repairing her image, it is time for Capcom to stop sitting on the fence and canonically say she is trans. But even then, it will be up to Capcom to make her representation matter and break their track record of using Poison as the butt of jokes.

More like this
Gaming
7 hours ago
You need to watch the trippiest courtroom thriller ever made on Amazon Prime ASAP
By Hayes Madsen
Gaming
Sep. 25, 2022
The 10 best Resident Evil games, ranked
By Joseph Yaden
Gaming
Sep. 26, 2022
Last of Us HBO trailer hints the show won't ignore a key romance
By Jen Glennon
Related Tags
Share: