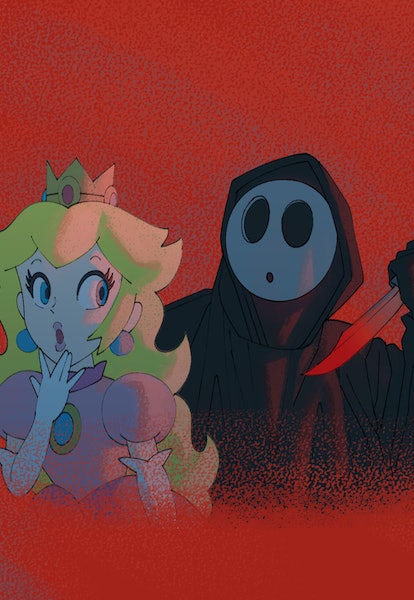 The very nature of the horrific is to transgress, to delve beyond what’s acceptable.

Back in February 2022, the release of the controversial indie game Martha Is Dead sparked queasy derision amongst critics, prompting Rock, Paper, Shotgun to wearily describe it as “the game where you peel a dead woman’s face off.” But while the shocked conversations surrounding the launch of the game may have faded, a bigger problem that allows games like this to exist in the first place remains. The implied threat of monstrous violence against women has been a prominent video-game trope since Mario first rescued Princess Peach from Bowser. As the medium has matured, portrayals of that threat have become all the more explicit — both literally and figuratively.

Martha Is Dead takes the grotesque to new heights. In its headline-grabbing scene, Giulia skins her dead sister Martha’s face and places it over her own, emphasizing how she’s stolen Martha’s identity. Most devoted horror fans, myself included, don’t necessarily take issue with the narrative told within that interactive scene. Horror is, by its very nature, hard to watch.

Nevertheless, this moment is obscenely ghoulish. After a moment that could make the most stoic of us squirm, the game allows us to look back at our handiwork; we are left to linger over the mangled corpse. The implication is that the entertainment value of this desecration is more important than what the incident reveals about Giulia’s deteriorating psyche.

Giulia later breaks into Martha’s crypt, cuts open her clothes to expose her naked body, then uses those same scissors to cut open Martha’s womb to reveal a fetus. In that moment, Martha is the ultimate embodiment of vulnerability. Despite the peace that death should bring, further violations are placed upon her body. The serene purity of the unblemished feminine body is taken against its will, forced to endure horrors it can’t defend against.

“The game delights in killing her with sexually charged brutality.”

The use of nudity and violence to abuse and overpower women, both living and dead, is seen in other popular games, such as Tormented Souls. Released in August 2021, the game received many favorable reviews for its retro survival horror vibe. But others weren’t impressed. Gaming Trend exasperatedly called it “just another instance of the brutalization and gratuitous sexual violence aimed at women that has pervaded the horror genre since its inception.”

Frankly, it’s difficult to see Tormented Souls any other way. The fixed camera perspective places the player in a predatory position from the outset. Often lurking behind her, the angle low like that of a stalker, you regularly see the protagonist Caroline’s underwear as she roams the abandoned hospital. It’s an unavoidable and deliberate design feature, her underwear rendered in intricate detail.

This “artistic decision” bears no impact on the actual narrative, and is most conspicuous in the game’s opening scenes, when Caroline is brutally knocked unconscious. Less than three minutes into the game, we see her wake up naked in a bath with an endotracheal tube down her throat, her body writhing and spluttering as she rushes to remove it.

“If a woman’s body should deviate from the norm, it becomes a frightening ‘other’ that must be combated.”

This grotesque voyeurism sexualizes her abuse in two distinct ways. First, the camera always sits in a position that offers the most graphic angles of nudity. The player looms over the bath, looking down on her from a place of safety and superiority, then joins her in the bath, positioned at the opposite end to maximize the visual impact of her nudity. Second, Caroline moans as she removes the tubing in a way that’s clearly intended to evoke oral sex, her heaving chest further underscoring the eroticism. This demeaning and traumatic episode transforms Caroline from a sharp-witted investigator to a vulnerable victim in a matter of minutes, a transformation that follows her throughout the game.

It’s all too easy to suggest that indie horror is the issue — these are both niche games with a limited reach, after all. But AAA franchises are just as guilty of fetishizing violence towards women, even if they do so in less overtly salacious ways.

Jill Valentine, one of the heroes of Capcom’s 2020 Resident Evil 3 remake, is a particularly alarming example. Despite being known as an iconic badass within the beloved zombie franchise, the game delights in killing her with sexually charged brutality. A case in point is a scene that involves a giant spider monster strangling Jill from above, then ramming a large tentacle down her throat. Similar to Tormented Souls, the camera angles emphasize Jill’s vulnerability: we look down at Jill as the creature inserts the tentacle, and get a close-up of her mouth gagging around it.

There wasn’t a scene like this in the original game — this is a totally new invention for the remake. What’s more, when you play as the game’s second playable character, Carlos, these kinds of scenes simply don’t happen. He’s harmed, of course, but never in such an overtly sexual manner.

The portrayal of Mia Winters, a supporting character in Resident Evil 7 and Resident Evil: Village, is a bit more nuanced in its execution, but nevertheless traffics in troubling tropes. The wife of protagonist Ethan Winters, Mia is alternately depicted as a victim to be ogled (like Martha, Caroline, or Jill) and as a reviled monster (like Giulia).

In RE7, Mia’s body becomes a site of vulnerability that Ethan must protect, while also being a vessel of horror in and of itself. She’s helpless to the whims of the series-staple zombie virus (it’s complicated) as it takes hold, forcing her to transform against her will. During one of their many fights in RE7, Ethan embeds a cleaver in the side of Mia’s neck, causing her face to transform from that of a crazed monster to the embodiment of serene femininity. The scene feeds into this idea of women being easily overpowered, yet simultaneously threatening.

Women’s bodies change throughout their lives, often more noticeably than men’s — think of menstruation, pregnancy, or menopause. As such, the feminine form sparks both curiosity and fear; men are alternately intrigued or repulsed by what it can turn into. If a woman’s body should deviate from what they determine is the norm, it becomes a frightening ‘other’ that must be combated. It’s one of the chief reasons why abuse of the female body takes center stage all too often in horror games.

Horror provides an ideal vehicle to explore these ideologies without repercussions, with the line between pop culture commentary and fiction blurring. It entertains from a place that continues to reinforce stereotypical views of women, a perversion of horror that comes from enjoying women suffering. Moving beyond these kinds of lazy tropes is an essential step toward telling more memorable and thought-provoking stories in the genre.