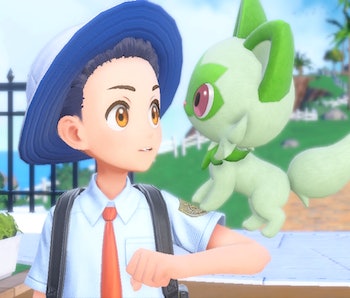 No matter which cute little critter you pick in the early hours of Pokémon Scarlet and Violet, you’ll have a powerful companion for your journey through the Paldea region. One of the more popular Generation IX starters this time around is Sprigatito, the “Grass Cat Pokémon” who starts out as a cute little kitty and evolves into a fearsome feline, picking up an additional Dark subtype along the way.

With so many Pokémon to choose from in Scarlet and Violet’s open world, it might be hard to stick to a core team of six monsters. But if you want to aim for the most optimized team that’ll last for the entire game, look no further than these five suggestions to complement your grassy gato.

But first: What’s the deal with Sprigatito? Your cat will evolve into a Floragato at level 16 and start walking around on its hind legs while slinging around a flower yoyo for its attacks. Its type won’t change just yet, but it does pick up some darker color patterns on its fur hinting at what happens at Level 36. At that time, Floragato evolves into “The Magician Pokémon” Meowscarada and becomes Grass/Dark, boasting tremendous Speed and Attack. You’ll want to emphasize physical Grass, Dark, and other type moves to capitalize on its strengths.

Considering Meowscarada’s types and stats, here are the five best Pokémon you should catch ASAP to round out your party:

Magikarp has been a great decision for every Pokémon trainer since the original games. The dumb-looking floppy fish is totally useless, yet for some reason, at level 20, it evolves into the monstrous Gyarados. As a Water/Flying type, Gyarados is incredibly susceptible to Electric moves, but it boasts a decent moveset and incredible stats.

Having Gyarados as your only Flying-type monster is a bit of a risk when it doesn’t get much in the way of effective Flying moves, particularly because Special Attack is its worst stat. You might want to consider picking up a Fletchling (Southern Paldea) and/or Rookidee (Eastern Paldea) to cover Flying, but having a strong Water Pokémon as a go-to in your party is an absolute must. Magikarp haters in need of a different Water Pokémon could also consider the ubiquitous but decent Chewtle (found by water and in various wetlands).

Every well-rounded Pokémon team needs a strong and fast Electric type. Scarlet and Violet deliver a brand-new option in the form of Pawmi, who is a very cute and very chubby orange mouse that’s a totally pawfect alternative to the incredibly trite Pikachu. Not only is Pawmi easier to find, but he’s got much better stats! Rather than Special Attack, however, Pawmi boasts high Speed and physical Attack (similar to Sprigatito), so it’s great that he learns Nuzzle early on. This physical move has a chance of inflicting Paralyze on the enemy. At Level 18, Pawmi will evolve into Pawmo and pick up the Fighting subtype, and then after forcing it to walk 1000 steps with the “Let’s Go” autopilot feature, it’ll then evolve into Pawmot.

This one’s a slightly later wildcard pick, but you should be able to find Gible before you hit Level 30. This land shark-looking Dragon/Ground Pokémon is a late bloomer like most dragons in the franchise, reaching its final evolution of Garchomp at Level 48. Garchomp is widely praised as a “pseudo-Legendary” thanks to its staggering 600 base stat total. Gyarados does pick up its fair share of Dragon moves, so having a Dragon on your squad isn’t totally necessary. And Ground isn’t a must-have typing either for a Pokémon team.

However, Garchomp is simply too good to pass up regardless of what game you’re playing.

Like Pawmi, Tinkatink is a newcomer to the franchise worth paying attention to thanks to its ridiculous base stat total of 506 with an emphasis in Speed and Special Defense.

The Fairy/Steel “Metalsmith Pokémon” looks like a little sentient balloon creature that’s about to burst into tears, so he smashed some sort of bottle he’s now wielding as a weapon. Upon reaching level 38, this peculiar little guy transforms into the mighty Tinkaton, a rabbit-looking fairy with floppy ears who trades the bottle for a giant hammer he seemingly stole from Reinhardt in Overwatch. Despite the big hammer, Tinkaton’s Attack and Special Attack are a bit modest, hovering in the 70s, but with a Speed in the 90s, it’ll be able to act before most of its enemies. An added bonus? Fairy/Steel is hands down one of the absolute best type combos in the franchise with nine type resistances and two immunities.

Continuing the trend of very cool new Pokémon that have arrived in Scarlet and Violet, Charcadet is a must-have bipedal Fire monster that looks sort of like Megaman once fully evolved. Especially for any trainer that does not pick the Fire starter Fuecoco, Charcadet is essential. This “Fire Child Pokémon” is very hard to find and admittedly pretty creepy-looking at first, but he’s worth the trouble to evolve. You’ll have to track down a man in the town of Zapapico near the Poison Team Star Base and give him either 10 Bronzor Fragments if you’re playing Scarlet or 10 Sinistea Chips if you’re playing Violet. That will reward you with the Auspicious or Malicious Armor, respectively, which can then be used to evolve Charcardet into its version-specific final form.

Armarouge in Scarlet picks up the Psychic subtype with a base stat total of 525 and very high Special Attack. Its Speed is a bit lacking, but it has decent HP and Special Defense with great Defense to make up for it. Over in Violet, Ceruledge is a tad faster with a Ghost subtype and very high Attack, which is an odd combo considering most Ghost moves are classified as Special. Regardless, it’s worth it in both versions.

Depending on your version, however, consider training up an additional Pokémon to cover up the potential blindspot. Scarlet players who get Armarouge may want to consider a Gengar or Drifblim for some Ghost action whereas Violet trainers with Ceruledge should definitely get some kind of Psychic Pokémon like Ralts (South Province, Area One).

More like this
Gaming
Jan. 31, 2023
The 8 Essential Fire Emblem Engage Characters You Need in Your Party
By Robin Bea
Gaming
17 hours ago
These Fire Emblem Engage Characters Are the Best Fit For the Windsweep Ability
By Hayes Madsen
Gaming
Feb. 7, 2023
How to Get the Scholarly Lisa Skin For Free in Genshin Impact
By Jess Reyes
LEARN SOMETHING NEW EVERY DAY.
Related Tags
Share: