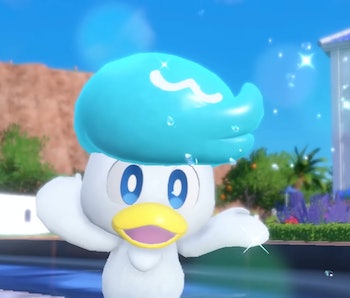 The Paldea Region is officially open, and you’ve just enrolled at the local school. Not only did you score the nicest dorm room in the multiverse, but you’ve also chosen a free starter Pokémon at the beginning of your Pokémon Scarlet and Violet adventure. Maybe you picked the grass cat Sprigatito or the charming fire crocodile Fuecoco, but if you’ve got a serious sense of style, then maybe you went for the dapper duck Quaxly?

There are many monsters to choose from in Scarlet and Violet’s open world, and while you should invest in more than just a team of six, you’ll optimize your time by having a core team lined up with balanced based on types, strengths, and weaknesses.

But you should know a few things about Quaxly to start. This white duckling has a delightful blue hairstyle reminiscent of a pompadour. At Level 16, it evolves into Quaxwell, and then later at Level 36, it becomes a Quaquaval. In its final form, this Pokémon picks up the Fighting subtype. Very few Pokémon have the Water/Fighting combo, with Poliwrath being really the only other instance — and it’s often considered one of the very best! That makes it strong against some of the most common types, namely Fire, Ground, and Rock but also against some of the oddball types like Dark and Steel.

Stat-wise, Quaquaval is rather balanced with an emphasis on physical Attack, which is a bit unconventional for Water Pokémon but ideal for the Fighting subtype. Based on typing and other factors, here are the five best Pokémon you should catch ASAP to make the ideal team:

One of the earlier Pokémon you might see in Paldea looks like a little green ball, specifically an olive. They’re native to the olive fields near the town of Cortondo, the location of the first gym. Head a short distance southwest of the map’s center, and you’ll find one.

By Level 35, your Smoliv will evolve into the stunning Arboliva, and while Grass/Normal isn’t the most exciting combo around by any means, Arboliva’s base stat total hits 510 with a whopping 125 in Special Attack. While its abysmal Speed can be a problem, it has solid defenses and acceptable HP. You may want to consider this slot for a late-game flex. Depending on which form of Charcadet you evolve it into, you may want a Psychic or Ghost type instead, or any of the pseudo-Legendaries or dragons you might catch later will suit you better.

Electric is one of the absolutely essential non-starter types that every party needs. Pawmi is a brand-new monster in this generation of games that’s genuinely great, however, once it’s fully evolved, it also picks up the Fighting subtype — just like your beloved starter duck. Because that presents a weakness, we suggest going in another direction.

After you get your olive, head for the coast! Wattrel is an electric bird Pokémon that can be found along the coasts on the entire southern half of the map and even in areas slightly north of the center. Its base stats hit 490, which isn’t too shabby, but the real winning feature is its 125 Speed and 105 Special Attack. In other words, this bird is built for fast shocks. And the fact that it can cover your Flying type slot as well is a huge boon.

Every trainer who does not select Fire starter Fuecoco (which includes you) simply must hunt down the ever-so-elusive Charcadet. This “Fire Child Pokémon” is pretty creepy-looking at first, but he’s worth the trouble to evolve. In the town of Zapapico near the Poison Team Star Base, there’s a man who will take either 10 Bronzor Fragments if you’re playing Scarlet or 10 Sinistea Chips if you’re playing Violet. That will reward you with the Auspicious or Malicious Armor, respectively, which can then be used to evolve Charcardet into its version-specific final form.

Armarouge in Scarlet picks up the Psychic subtype with a base stat total of 525 and very high Special Attack. It may be a bit slow, but it has decent HP and Special Defense with great Defense to make up for it. Ceruledge is a tad faster with a Ghost subtype and high Attack, which is unconventional but not a deal-breaker.

Depending on your version, however, consider training up an additional Pokémon to cover up the potential blindspot. Scarlet players who get Armarouge may want to consider a Gengar or Drifblim for some Ghost action whereas Violet trainers with Ceruledge should definitely get some kind of Psychic Pokémon like Ralts (South Province, Area One).

Pawniard has swords for hands and looks like he’d be best friends with your Charcadet. Though this powerful Dark/Steel monster is slow and doesn’t fully evolve until after Level 52, a fully evolved Kingambit has base stats of 550 with incredible Attack and Defense. And he looks like a Samurai with a big sword on his forehead. Because he’s Dark/Steel, Pawniard can fit in just about any team composition. The one exception is that Dark seems to be a very popular sub-type. For trainers that selected Sprigatito as their starter, Pawniard may not be worth it for this very reason.

But for all you Quaxly trainers out there, Pawniard is an excellent choice. You’ll be able to track him down slightly later, circa level 22, if you explore the lands on the east and southeastern side of the map.

This shark-like Dragon/Ground Pokémon fully evolves at higher levels like most dragons in the franchise. But when it becomes Garchomp at Level 48, it becomes a beast so powerful that it’s long been called a “pseudo-Legendary” thanks to its staggering 600 base stat total. Ground isn’t a must-have typing for a Pokémon team per se, but Garchomp is too good to pass up — especially if you’re sticking to a list like this one which does not feature any Rock Pokémon.

If you have Pokémon Scarlet, you could consider hunting down a Larvitar instead, a version-exclusive that lives on mountains and near caves, particularly areas just northeast of the map’s center. Its fully evolved form Tyranitar is Rock/Ground with a similar epic stat spread.

More like this
Gaming
Jan. 31, 2023
The 8 Essential Fire Emblem Engage Characters You Need in Your Party
By Robin Bea
Gaming
16 hours ago
These Fire Emblem Engage Characters Are the Best Fit For the Windsweep Ability
By Hayes Madsen
Gaming
9 hours ago
Kirby’s Return to Dream Land Deluxe Is Better With Friends
By Willa Rowe
LEARN SOMETHING NEW EVERY DAY.
Related Tags
Share: