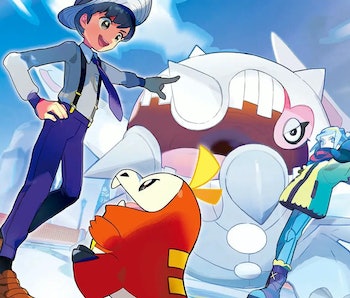 Pokémon season is upon us! Each of the three starters you can select aat the beginning of your Pokémon Scarlet and Violet adventure eventually transforms into a powerful monster. While the grassy cat Sprigatito is a great choice, perhaps the very best of the three is the adorable “Fire Croc” Fuecoco.

There is a staggering number of monsters to choose from in Scarlet and Violet’s open world, and while you can and should invest in more than a core team of six, you’ll optimize your time by planning out a solid team of six that’s balanced based on types, strengths, and weaknesses. If that’s what you’re looking for, here are five Pokémon you should catch ASAP.

But first: You should get to know your beloved Fuecoco. While he starts with a goofy smile as wide as his entire body, he gets a bit more serious as Level 16 and starts wearing a fiery sombrero as Crocalor. By Level 36, it then evolves into Skeledirge and becomes Fire/Ghost, like a Hisuian Typhlosion from Pokémon Legends: Arceus.

Skeledirge is a bit tanky with high HP and Defense, and while its top-tier Special Attack is perfect for its typing, its incredibly slow Speed holds it back a bit. That said, it’s immune to two types and resistant to seven others, which is a huge boon.

Based on its typing and other factors, here are the five best Pokémon you should catch ASAP to make the ideal team:

Probably the first Pokémon you encounter on your journey through Paldea will be a Hoppip. They look a bit like Kirby with a vine helicopter atop their head. You’ll find them wandering about in the grass, flying around wooded areas, and maybe even hanging from tree branches. Truly, you cannot miss them.

While your Hoppip will become outclassed by more powerful Pokémon later in the game, it’s a very strong addition to the early-game team for any trainer who does not pick Sprigatito as their starter. You don’t necessarily need a Grass type for the long haul, but you’ll definitely want something with Flying for the whole game. If you decide to ditch your Hoppip or its evolved Jumpluff, just go all in on the nearest bird and you’ll do alright.

Every Pokémon squad needs a reliable Water beast, and very early in the game, should you wander near any body of water, you’ll probably encounter a turtle that looks like it might be a discount Water starter. A viable contender for trainers who pick the Grass or Fire starter in this generation, Chewtle picks up the rare Rock subtype when it evolves into Drednaw at Level 22. While its stats won’t impress any of the professionals out there, its unique typing and emphasis on Attack rather than Special Attack makes for an interesting complement to your squad.

Strangely enough, Pokémon Scarlet and Violet are lacking in strong Water Pokémon anyway, so unless you pursue a Gyarados or Golduck by catching a Magikarp and Psyduck respectively, you might as well go this route.

Electric is one of the absolutely essential non-starter types that every party needs. Scarlet and Violet introduce a new option called Pawmi. This chubby orange mouse is for trainers who are sick of Pikachu and are enchanted by its emphasis on Attack over Special Attack. He learns Nuzzle early on, which is a physical move with a chance of inflicting Paralyze on the enemy. At Level 18, Pawmi will evolve into Pawmo and pick up the Fighting subtype, and then after forcing it to walk 1000 steps with the “Let’s Go” autopilot feature, it’ll then evolve into Pawmot.

Because you picked Fuecoco as your starter, you probably won’t want to pursue the excellent Charcadet, who winds up as either a Fire/Psychic or Fire/Ghost depending on which game you chose — therefore potentially overlapping with your starter.

You’ll want to find somebody to fill that goblinoid-shaped hole in your squad. Enter Pawniard, a powerful Dark/Steel contender with swords for hands! Though he’s slow and a late bloomer who doesn’t fully evolve until after Level 52, a fully evolved Kingambit has base stats of 550 with incredible Attack and Defense. You’ll be able to find him slightly later, circa level 22, if you explore the lands on the east and southeastern side of the map.

This shark-like Dragon/Ground Pokémon fully evolves at higher levels like dragons in the franchise. But when it becomes Garchomp at Level 48, it becomes a beast so powerful that it’s long been called a “pseudo-Legendary” thanks to its staggering 600 base stat total. Ground isn’t a must-have typing for a Pokémon team per se, especially if you have Rock covered by Drednaw, but Garchomp is too good to pass up. Catch one as soon as you can, and level it up for the long haul.

More like this
Gaming
Jan. 31, 2023
The 8 Essential Fire Emblem Engage Characters You Need in Your Party
By Robin Bea
Gaming
16 hours ago
These Fire Emblem Engage Characters Are the Best Fit For the Windsweep Ability
By Hayes Madsen
Gaming
8 hours ago
All 24 Game Boy and GBA Games Coming to Nintendo Switch Online
By Jess Reyes
LEARN SOMETHING NEW EVERY DAY.
Related Tags
Share: