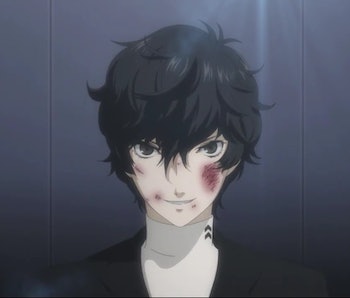 Trust me, it gets good after 20 hours. Maybe you’ve heard this phrase before from that one friend who swears by the latest RPG. But a slow opening can kill a game, leaving a player tired of waiting for some far-off promise of fun. Why play 20 hours of set-up when you could play an entire game you might actually like in the same amount of time or less? Persona 5 fixes that problem with an opening that immediately hooks you in and never lets you go.

In media res — Once players start a new game, they are immediately thrust into a high-intensity heist. As the mysterious Joker, you make your way through a casino until law enforcement shows up trying to capture you - they succeed. Joker wakes up in an interrogation room and is questioned on the nature of The Phantom Thieves criminal group.

Then the flashbacks start.

In the span of a few minutes, Persona 5 asserts itself as a crime story that begins at the end told in retrospect by the protagonist to the detective Sae Niijima. While the player knows nothing about who these characters are or what is going on at the opening, one thing is for sure. They will want to know more.

After this stunning cold open, the game begins to check off the typical requirements of the start of any story. You meet the protagonist, learn a bit about his past, then get introduced to the rest of the supporting cast and the main conceit of the game.

This isn’t to say that the rest of the opening hours of Persona 5 aren’t slow. They still are, but in the same way, any game that can take over a hundred hours to beat is. Establishing the world is long work if the story is to pay off in the end.

The trick is that Persona 5 plants a mystery in the player’s mind from the start, so the need to discover the secret of that mystery propels them forward. As the rest of the world and cast of characters grows on the player the game continues to return to the framing narrative of the interrogation room. More questions arise and suddenly you find yourself caring about the outcome. Joker being captured feels unthinkable — how in the world can the game arrive at this inevitable end?

You’ll never see it coming — When the plot of Persona 5 does eventually catch up to the opening the player has just finished Sae Nijjima’s palace, the Casino. Just like in the opening Joker is taken to the interpretation room. Now we have come full circle.

Then Goro Akechi walks into the room. Akechi is a supporting character throughout Persona 5, one you can build your relationship with and even joins the party for a time. He is an ally. But in the interrogation room, he pulls out a pistol and shoots Joker point blank, then places the gun in the protagonist's limp hand to make it look like a suicide. Joker is dead. We see a montage of the rest of the Phantom Thieves hearing about Joker’s death until we see Ryuji getting the news and suddenly, he smirks.

Upon playing this sequence it seems like a bold ending to Persona 5. How could they kill the main character? But Ryuji’s smirk hides a secret. In an Ocean’s Eleven-worthy montage, we see Sae return to the interrogation room to discover Joker alive and well. He then reveals a plan unknown to the player that has been in place the entire game.

In conducting the heist in Nijjima’s palace, instead of stealing her heart, the Phantom Thieves pretend to finish the job fooling Akechi into thinking they have taken Sae’s heart. This means the palace does not disappear. Everything that occurred in the interrogation room only happened in the Metaverse. Turns out Joker had a bad feeling about Akechi from the start, and the entire heist was planned to turn the tables on him and reveal his true self.

This twist is jaw-dropping. Adding depth to the use of the framing narrative that hooks players in the first place. For tens of hours Persona 5 instills this belief that you are running towards your own end, Joker will be captured. By flashing to this multiple times we expect the logical resolution. That is when Persona 5 pulls the rug out from under the player.

At its core Persona 5 is a heist game. You play as a group of thieves; you have to plan heists in palaces. The interrogation room twist fulfills the time-honored tradition of massive reveals in a heist movie. Just when all the chips are down and it looks like the main cast has been outsmarted, it is revealed they were one step ahead the whole time. This trick that the game pulls on the player by keeping them in the dark and playing on expectation is such a satisfying twist and adds a shot of adrenaline into the story, making the rest of the game feel exciting in how the Thieves resolve the rest of the plot.

To this day, it’s one of the best moments in gaming, and it all stems from the brilliant opening that leaves you wanting answers from the start.