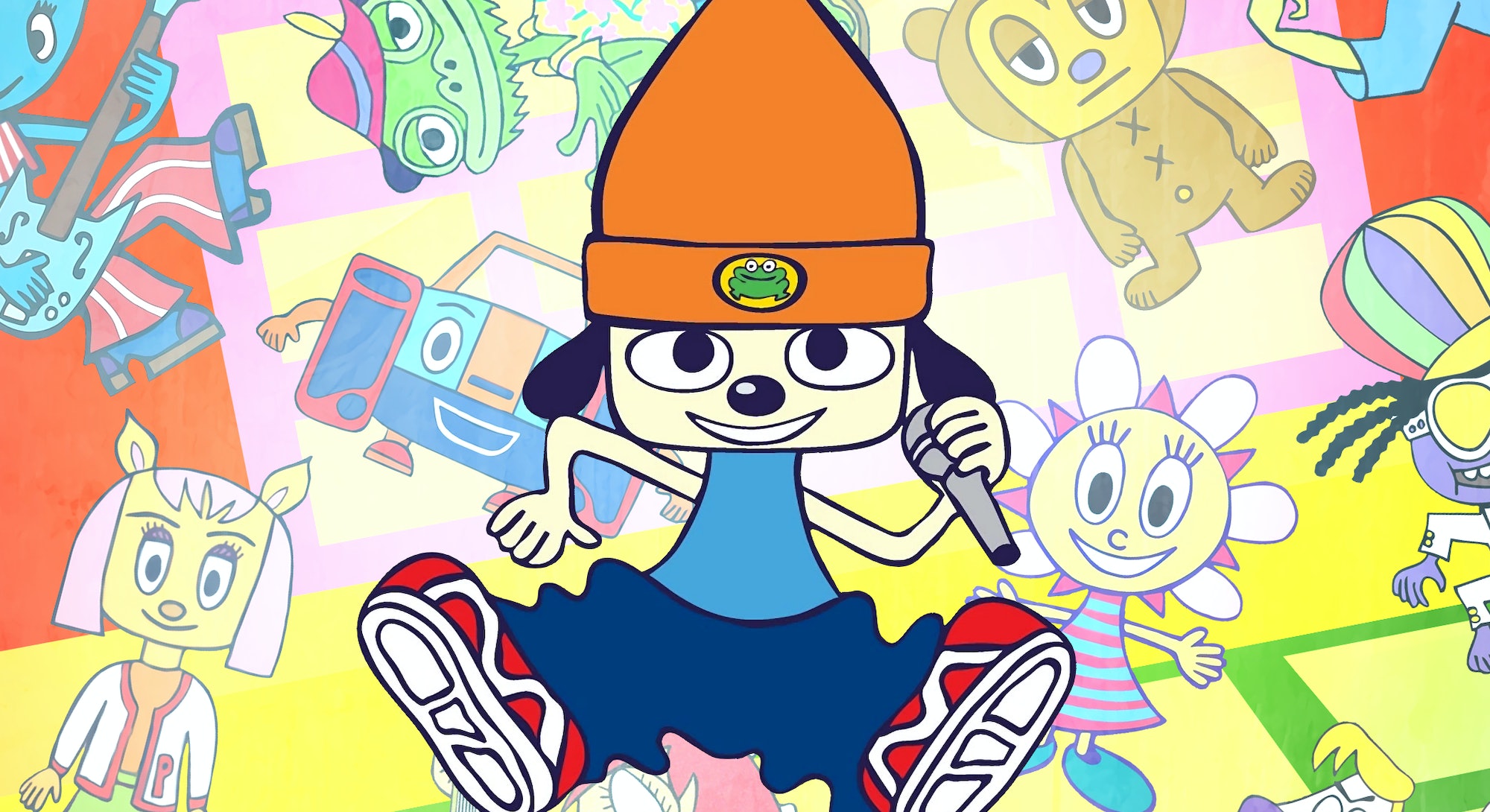 Axe body spray commercials tell us that, out of all five senses, smell has the closest link to memory.

Even if you haven’t smelled a particular aroma in decades, that recognition is immediate. But sound is a close second to stink, and music is its most potent form of all. If you’ve ever played the classic PS1 music game, PaRappa the Rapper, it will only take two words to set your toes tapping and shoulders shimmying — Kick! Punch!

Launched in Japan in late 1996 (and about a year later in Europe and North America), Parappa the Rapper is a timing-based rhythm game where you play a beanie-clad dog who wants to impress a girl with a flower for a face. So he enlists the help of an anthropomorphic onion wearing a karate gi.

It’ll make more sense if you see it for yourself.

In 2022, genre-defying games with adorable art are a dime a dozen. That wasn’t the case in 1997. Game developers and publishers were squeamish about releasing Japanese games that felt too “niche” or culturally specific to resonate with an overseas audience. (This was the same era that saw Pokémon characters referring to rice balls as “jelly-filled donuts,” after all.)

PaRappa the Rapper was far from a sure thing at launch. Executives at PlayStation were not sure how to market it in Japan, let alone to the newborn weebs of North America and beyond, who were still cutting their teeth on Final Fantasy and Dragon Ball.

In a 2017 interview for the official PlayStation blog, series creator and renowned pop musician Masaya Matsuura spoke candidly about the trepidation surrounding the game.

“Upon completing PaRappa and gearing up for promotion, I had a discussion with the staff from Sony Computer Entertainment about how we should go about promoting the game. I remember that many of the staff at that time saying that, “this is not a game.” Even for me, it was not clear to me either if this was a game or not,” he said. “I would have never thought that PaRappa would have had such a good reception for this long.”

Matsuura also wasn’t at all sure how the humor would land outside Japan.

“I presumed that the Japanese audience would understand the jokes or humor of PaRappa to a certain extent. But I had never thought this sense of humor would travel overseas,” he said elsewhere in the 2017 interview.

It certainly helps that the music absolutely slaps. If this doesn’t make you wiggle in your seat, maybe you’re from another planet.

PaRappa the Rapper was never a blockbuster, but it sold far better than the people who made it dared to hope, moving roughly 3 million copies across its various ports since launch. But its impact was larger than that sales figure suggests. The former head of Sony Interactive Entertainment Worldwide and current head of PlayStation Indies, Shuhei Yoshida, spoke about the game’s broader influence in that same 2017 PlayStation blog interview.

With PaRappa, we were able to establish a crucial position for “music games” as a genre in gaming worldwide. It had so much of an impact that it managed to keep music games going by continuing to stimulate other music game creators to create successor hit titles in the genre,” Yoshida said. “The release of PaRappa made me realize just how much fun it is to make games.”

This last part seems like kind of a polite throwaway, but it speaks toward the way in which the unlikely success PaRappa shaped Sony’s approach to the PS1 era. It made executives rethink the kinds of games that could be successful worldwide, and made them more open to the idea of bringing smaller, more idiosyncratic games to a global audience.

The series’ graphic designer Rodney Greenblatt reaffirmed this in a 2005 interview with Game Developer (neé Gamasutra). At the time PaRappa came out, leadership at Sony Computer Entertainment America only wanted bleeding-edge 3D games on the PlayStation. (Awful!) The success of PaRappa played a direct role in changing that.

“When they decided to sell the game here, that was only because it was a huge success in Japan; I don't think the U.S. PlayStation people were all interested in our ideas at all. But then we sold a lot of copies and they woke up,” Greenblatt explained. “They had no idea how to market it when they got it here; it was like, they didn't get it either.”

PaRappa the Rapper paved the way for more offbeat, genre-defying Japanese games to reach overseas audiences, during and after the 1990s. The world of video games might be a lot more boring if Sony hadn’t been willing to take a chance on a rapping dog. Imagine a world without Yakuza’s karaoke minigame, or where Trombone Champ never existed! Horrifying stuff.

PaRappa the Rapper Remastered is available now for PlayStation 4.