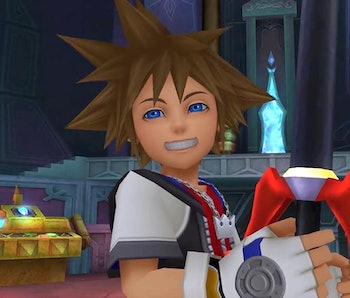 20 years ago, I was home from school for a few days with a terrible cold. At 13 years old, I’d somewhat recently become a Final Fantasy mega-fan, and even though I was trying so hard to be “too cool” for Disney, the promise of a Disney-Final Fantasy mashup sounded unspeakably awesome — doubly so because the protagonist was roughly the same age as me. Thus, I begged my mother to go buy me a copy of the newly released Kingdom Hearts.

It was awesome. And it helps that the music absolutely slaps.

While the adventure is full of excellent high points, nothing is more memorable for me than the jaw-dropping moment when the hero, Sora, sacrifices himself to save his crush. So let’s reminisce on the anniversary of the game’s North American release.

The 1.5 and 2.5 ReMIX versions are HD remasters of the first and second game.

On one hand, Kingdom Hearts is a deeply silly amusement park ride in video game form, a shameless vehicle to showcase various Disney worlds. You’re literally a bright-eyed boy who teams up with a powerful pantsless wizard named Donald Duck and a gallant knight named Goofy. Gawrsh! But the lore is impeccably deep, the stakes quite dire, and the characters are just so endearing and memorable.

Sora is a simple boy who lives on a simple tropical island. His best friends include a much-cooler edgy emo kid named Riku and a cheerful, loyal girl named Kairi. Calamity strikes when creepy Heartless monsters — physical manifestations of the Darkness in people’s hearts — invade and consume their home world. Sora survives, seemingly because he is chosen by a key-shaped sword called a Keyblade (it’s a little more complicated than that, but the finer details don’t matter much).

Sora wakes up in another world entirely and is soon tasked with traveling a cartoonish multiverse of Disney worlds with Donald and Goofy to seal the heart of each world. (Yes, Kingdom Hearts has always been peak multiverse storytelling long before it was overly trendy.) Along the way, Sora learns that Riku has been corrupted by Darkness and that Kairi survived in a comatose state. Even worse: Some Disney villains are hunting down the seven Princesses of Heart so they can unlock Kingdom Hearts, a source of great knowledge and power. And Kairi? She’s one of those princesses!

Each romp through a Disney world and the hilarious antics of Sora-Donald-Goofy as a lovable trio are genuinely fun, but all the best story moments in Kingdom Hearts involve its main characters. This brings us to the scene that almost made me cry 20 years ago.

Sora tracks Riku down to the final world of Hollow Bastion, a sinister castle chock full of Heartless. Riku and Maleficient (yes, the witchy Disney villain) use the Princesses of Heart to create an evil Keyblade capable of unlocking Hearts, which partially opens up Hollow Bastion’s Keyhole. The process fails, however, because Kairi hid her Heart within Sora’s when their home was destroyed. After defeating Riku and Maleficient, Sora’s only option to save Kairi is to use the evil Keyblade on himself, therefore unlocking all seven of the princess's hearts which opens the Keyhole that leads to Kingdom Hearts.

So to save his crush, this kid stabs himself in the chest with a magical sword that dissolves his body into flickering spurts of light. He falls into darkness but is then transformed into a Heartless, and get this: You then control the weakest of all Heartless types, chasing after your friends as they try to escape. I was absolutely gobsmacked during this gameplay sequence. For a few fraught minutes, everything felt hopeless as you shuffled around as a shadowy booger.

Yet somehow, through the power of ridiculous Disney love, Kairi recognizes Sora just as they’re swarmed by enemies. Her heart restores his human form, saving them all from what appears to be certain doom.

Narratively, it’s a ridiculous twist that somehow feels totally earned given the fact that Sora’s spent dozens of hours cheerfully helping everyone from Aladin to Peter Pan. But in the cosmology of Kingdom Hearts, it’s impossible to understate the significance of this event at Hollow Bastion.

Because Sora’s Heart was temporarily lost to Darkness, it created his Nobody (another type of being we won’t get into here) named Roxas — a hugely important character in Kingdom Hearts II and beyond.

Since the very beginning, Sora’s superpower has always been his kindness. A goofy kid with the affability of a Muppet, Sora cares SO MUCH about other people that his Heart is literally a vessel that other Hearts retreat inside of when in danger. He did it to save Kairi, but it isn’t until later games that we learn even more about the significance of this ability, so to speak.

In the prequel Birth By Sleep, a younger Sora’s compassionate psyche forges a connection with the Keyblade-wielder Ventus whose Heart was severely damaged in what we might as well call a magical experiment. And so, Ventus’ broken heart rested within Sora’s to heal for many years. That’s why Sora is able to wield a Keyblade to begin with: basically because he’s a nice kid who bonded with another kid in his dreams.

Particularly in an era where everything veers towards grimdark, uplifting and aspirational stories like Kingdom Hearts are few and far between. If Sora’s taught us anything, it’s that a sacrifice made out of love is the bravest thing anybody can do.

Kingdom Hearts was released in North America on September 17, 2022.

Subscribe to Inverse Daily for more stories about games, science, and entertainment that you won’t find anywhere else.

More like this
Gaming
Jan. 31, 2023
8 Years Later, Square Enix's Supernatural Teen Drama Remains Timeless
By Willa Rowe
Gaming
Jan. 27, 2023
Dirge of Cerberus is still the most incoherent Final Fantasy game ever
By Willa Rowe
Gaming
Feb. 1, 2023
The Best Video Game Ever Made Just Got Its Own Holiday
By Hayes Madsen
LEARN SOMETHING NEW EVERY DAY.
Related Tags
Share: