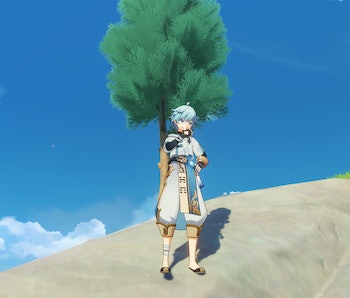 Genshin Impact has a habit of repeating activities when its in a lull. When not progressing through the game’s narrative, players can participate in activities like the co-op boss battles featured in Hypostatic Symphony or the more treasure-centric Lost Riches event. One of these events called Marvelous Merchandise encourages the Traveler to collect seemingly mundane overworld items to trade for valuable ones. Liben, the traveling merchant at the center of the event, asks for different items every day in exchange for mouthwatering Primogems. He’s been looking for Pinecones lately.

Here are the three best spots to find Pinecones if you don't have them.

Where do you find Pinecones in Genshin Impact?

Pinecones are usually found under fir trees. If you don't know how to spot a fir tree, look for trees that have thin trunks with short jagged branches on the bottom and thin flakey foliage on the upper half. Here's a picture of the tree you need to find.

Look underneath the tree to find your required Pinecones. You can also utilize Elemental Sight to locate Pinecones in areas you know they spawn.

What are three locations to farm Pinecones in Genshin Impact?

If you use the teleportation waypoint by the village in Liyue, you'll immediately find a bridge that has up to nine Pinecones on it at any given time. Make sure to use the waypoint stationed above the "Q" in Qingce on the map for the easiest access.

Teleport to the northernmost waypoint on Stormbearer mountains and trek your way up to the Anemo Hypostasis boss. Along the way, you should run into multiple Fir trees bearing numerous Pinecones. The largest cluster in the area is directly west of the Anemo boss.

The area directly north of Dawn Winery features Pinecones scattered throughout it. There aren't any clusters as you might find in the previous spots, but it's great if you need some extra pinecones to round out your inventory.

Where else can I find pinecones in Genshin Impact?

Pinecones are mainly located in Mondstadt. It’s less popular to farm for them in Liyue and Inazuma, even though there are a few places that grow pinecones in the area. In addition to the three hotspots listed above, you can also check for pinecones around Dragonspine. The pinecones are especially concentrated near water and adventurer campgrounds.

What can you do with Pinecones in Genshin Impact?

If you've already hit your required amount for Liben's daily request, you can put the remaining Pinecones to good use in a meal. After reaching Adventure Rank 15, you'll unlock the one-time dungeon, Temple of the Wolf. You can complete it to unlock a recipe for Mondstadt Hash Browns.

Each serving requires two pinecones, one potato, and one jar of jam. It's simple enough to make. The dish restores 30 to 34 percent of Max HP and grants an additional bonus of 600 to 1,900 HP. It's great to eat when you're in a cinch. If you have access to Razor, you'll be able to make a special version of the dish.

This article was originally published on Oct. 27, 2020