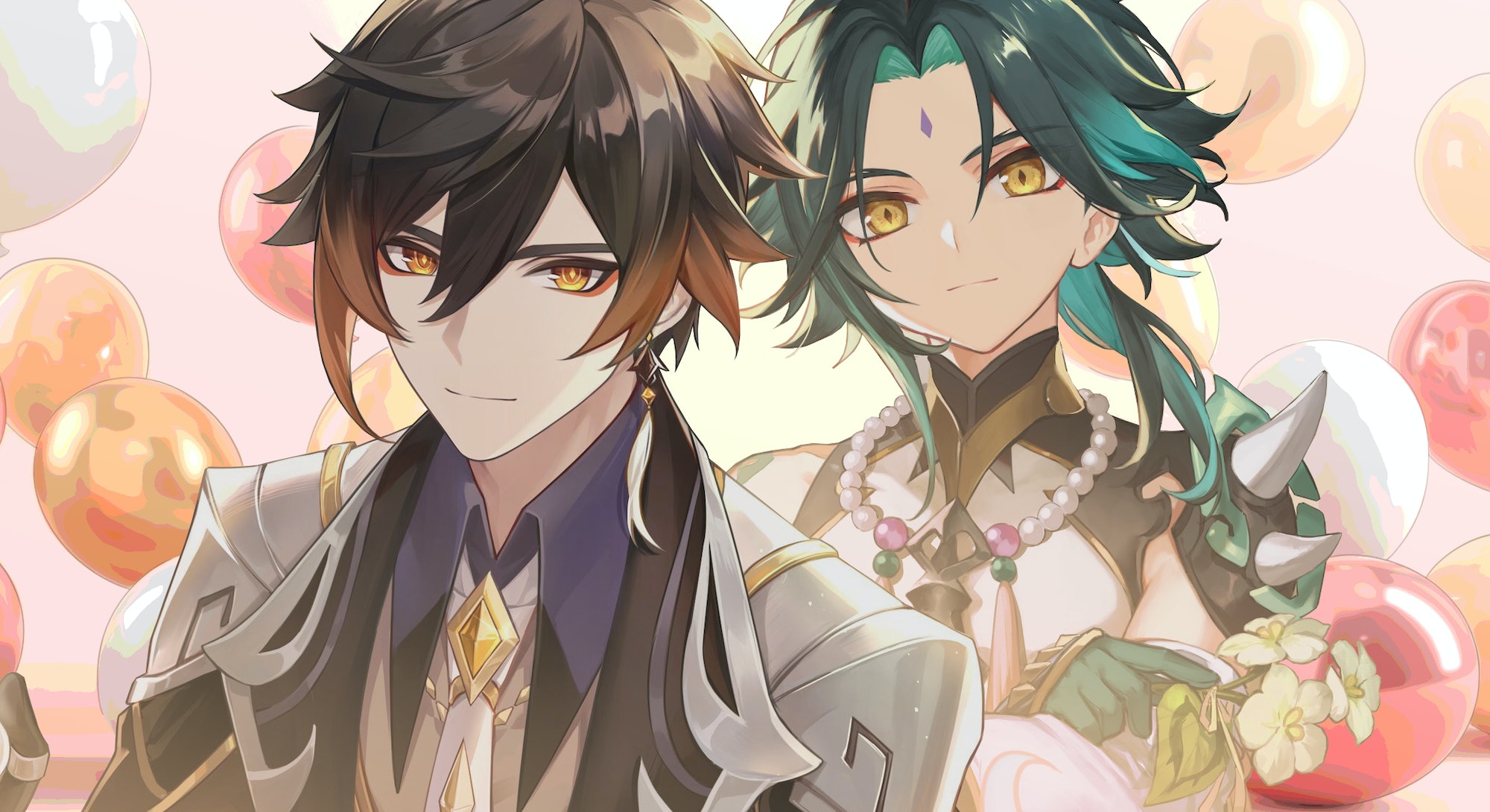 I started Genshin Impact as an escape.

I wanted to try the pretty free-to-play RPG everyone was talking about instead of grinding through my current life struggle: my job. That was a month after the game first came out in September 2020. That was almost two years ago.

All Genshin Impact players have their own story about why they put up with its infuriating artifact system, intermittent promotional blunders, and a community that can never seem to get enough drama. Inverse polled Genshin Impact players on social media and reached out to individual players about what they want from this year’s anniversary event, why they keep playing, and what they’re looking forward to in the game’s future. We received more than 50 answers, and one thread unites them all: Players want to feel seen and valued for the time (and money) they’ve invested in the game.

For many live-service games, anniversaries are a grand event – think of it like a birthday, but the players get the presents. It deserves more than some pocket change and a “thank you” message. Genshin Impact fans hope for something like an anniversary event or special edition item that can’t be claimed at any other point in the year. They tell Inverse they’re hoping to see anniversary-themed gifts, a free 5-star character, or something else that makes them feel that it’s the best time to be playing Genshin Impact. But they also aren’t holding their breath after last year’s event.

Let’s get this over with: Yes, people want a free 5-star and/or at least 10 free pulls.

Last year, Forbes’ Paul Tassi wrote an article about how HoYoverse could technically afford to give every player a 5-star character from the standard banner. Players haven’t forgotten this wish and are still holding out for it as a possibility. HoYoverse used a login event to offer players a free 10-pull last year, so that’s also seen as a benchmark for the company to surpass this year. The wishlist doesn’t end there: An anniversary namecard, Serenitea Pot furniture, skin, or even another glider – any of those would also be a welcome gift.

Players also want some acknowledgment that it’s the Genshin Impact anniversary in the game. HoYoVerse marked the occasion last year with a small fanart and cosplay contests on its social media channels, prompting outcry from fans who felt shortchanged. It eventually surprised fans with Primogem bundles, a login event, and an anniversary concert.

“All I ask is for the game to recognize its anniversary IN GAME and not elsewhere,” said Mike Thompson, who vividly remembers last year’s events. “We didn't even get a ‘happy anniversary’ in-game.”

He found last year’s anniversary rewards “not exciting, to say the least.” He hopes to see more in-game events to thank players this year.

“A lot of people say that we should be grateful, but they don't understand that at the end of the day, a game's anniversary is a celebration of its players being there and keeping it alive,” he tells Inverse. “We want to feel special, and in turn, make the game's devs look great.”

SevyPlays, a Genshin Impact YouTuber and Twitch partner based in the Philippines, also wants an in-game event rather than an item reward.

“I'm more interested in an anniversary event or even storyline that will make the player feel nostalgic and at home with the playable characters, whom we've come to know and love throughout the various story quests of the game.” She added that, if she could choose, there would be a skin for her favorite character, Zhongli.

Kez Macnamara, who leveled two Genshin Impact accounts above AR55, doesn’t expect anything from HoYoverse and doesn’t think fans should demand compensation from the company like they did last year. They also regularly play Honkai Impact and Tears of Themis.

“A game's anniversary is a celebration of its players being there and keeping it alive.”

“The toxic behavior last year was really greedy and cringeworthy,” Macnamara says. “Maybe it's my age… I'm in my 40's and I just don't expect free stuff in games. I was satisfied with just the concert last year, that was amazing.”

So fans have plenty on their wishlist. However, many of them are still playing — despite the sometimes rough communication with HoYoverse.

Genshin fans tell Inverse they stay with the game for multiple reasons, including the exploration, characters, and friends they play with. Alex Chang, who spends hours tinkering with the different characters, plays because he’s passionate about the plot and consistently improving his characters.

“Having new characters with slightly new mechanics keeps the game fresh for me,” he told me over Discord. “Learning all the little micromechanics and how to play optimally with a character is really fun. It also takes time to build them, so watching a character keep progressively getting more optimal through artifact grinding is also satisfying.”

Like Chang, Chad Burnette has been playing since the beginning. “I enjoy the gameplay, story, lore, and characters. I would LOVE to have *any* kind of meaningful endgame content, so I can justify playing more than 15 minutes a day.”

He adds that one of the things he’s most looking forward to is the eventual reveal of some of the game’s biggest mysteries — like the Tsarista's plan, the nature of the Abyss, and Celestia’s intentions.

“I sincerely hope to see something new for my characters to do. Right now, I feel like I own a Lamborghini, but every road is a school zone. It's kinda pointless to have powerful characters when the content is so easy,” he says.

“The toxic behavior last year was really greedy and cringeworthy.”

Other players are impatient with the slow burn reveals. Elisabeth de Oliviera Rodrigues, who has played on and off since the beginning, says she’s quitting again from the frustration.

“We're gonna get a whole new area in a month, and it's gonna last like a week because the devs are gonna time-gate it to stretch content. Then there's gonna be a whole other year of nothing,” she says. “Rinse, repeat for a decade 'till we reach endgame. At this rate, there's not gonna be any players left by then.”

What the future holds

Genshin Impact players told us they keep coming back because they enjoy learning about the characters and exploring the world. HoYoverse has started releasing content for the Sumeru update, which will come after version 2.8. However, some players are looking even farther than that. After Sumeru, there are still at least three more regions coming to the game — Fontaine, Natlan, and Schneznaya. Who knows if that’s really the end, though?

Just the latest of many Sumeru trailers.

“I really, really want an end game. Or at least make the game a little bit more mechanically challenging. They need to keep thinking of innovative events and mechanics in the game to keep the game fresh for people to learn and explore,” says Chang. “New areas to explore are fantastic so they should keep up the good work there, just maybe expedite the process a little bit more.”

Players above AR55 often complain about not having enough content to keep them occupied, especially if they already reached 100 percent exploration for every available region in the game and cleared the Spiral Abyss. There isn’t much for high-level players to do besides completing daily commissions, blowing through resin, and then logging out.

“I feel like I own a Lamborghini, but every road is a school zone.”

Milo Karkus doesn’t feel optimistic about the game’s future. Karkus, who has been playing the game since 1.3, is holding out for the Sumeru update before taking a break. When asked what they are most looking forward to in the future, they said, “The day when they add quality-of-life changes that make the game not a pain in the ass to play.”

“I'm mainly thinking of the artifact system, that you can spend months grinding and literally wasting resin and still don't have any good pieces, therefore not making any progress,” Karkus adds. “There is a lot wrong with Genshin, but the real problem is that it's not looking like things are going to improve in the near future.”

The artifact system Karkus mentions is one of the oldest and most widespread complaints within the Genshin Impact community. HoYoverse has improved on past “stale” concepts, like adding to its once-ignored Adventure Book, but it isn’t certain if the developer will really pull through with any change about resin or artifact grinding.

While some players are fed up, many others are only just joining Genshin Impact. Estimates from activeplayer.io claim that the game’s player count is steadily rising each month. Some of these are likely new players rather than the old ones all the way from September 2020. Still, the biggest fans seem to accept that they’re in for a long ride.

Sevy is particularly looking forward to how the story pans out. “I love good worldbuilding and a good story, and I totally understand it will take years before we reach the end, but I guess we're really in it for the journey,” she tells Inverse.

“Even if I have to wait a year for each new region to come out, I continue to look forward to it.”

So what do I think of Genshin Impact, two years in?

Well, I don’t think it will simply disappear anytime soon. It’s a game with a growing player base, regular updates that drop like clockwork, and a wild fandom that rivals the number of Final Fantasy fanfics on AO3. It has its flaws, but it's popular for a reason.

I didn’t fall in love with it at first. In fact, I complained about how long it took to reach AR 16 to unlock co-op. However, I later realized how much time I could spend just exploring, with the vast number of materials, treasure chests, and monsters to encounter. Combat was easy to pick up but difficult to master. New characters and updates steadily trickled in, shifting the meta and increasing what you could do in a day. It was a slow start, but eventually, I was hooked on progressing through the story and experimenting with the characters. Now, I’m writing about the game I picked up on a whim.