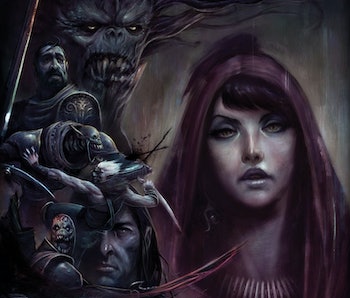 There aren’t that many types of stories. We tell stories with different details, but there are familiar structures we know well. The Hero’s Journey. Rags to Riches. Whatever The Sandman is about. Narrative arts like video games thrive in the subtle details. Stories are predictable, but details always surprise us. Especially between characters. And one RPG franchise stands the test of time by doing this better than anyone else.

Dragon Age: Origins marked the beginning of a legendary RPG franchise from one of the best studios in the game, BioWare. In a genre full of bloated storytelling and suffocating lore, Dragon Age: Origins manages to tell a familiar tale in a game that’s full of surprises while setting the foundation for generations of epics to come.

On the surface, Dragon Age: Origins might seem a little trope-y. You begin the game with a robust suite of character creation options, including several paths for your backstory and character class. Dragon Age: Origins emphasizes early that your decisions matter. The character you create impacts your journey as a Darkspawn-slaying Grey Warden. But RPG fans will feel at home choosing an elf, human, or dwarf to be a warrior, rogue, or mage.

What follows is an epic RPG with a capital “E.” Playtime can easily hit triple digits, especially if you’re into the rise and grind completionist mindset. And as the intricate story unfolds, you’ll always have another playthrough in mind as you ponder how things would go if you were a mage or dwarf instead.

The narrative arc is driven by the nuanced, multifaceted characters who will come to join your party. Dragon Age: Origins is gaming’s Helen of Troy; the franchise that launched a thousand ships. Fans clearly feel deep, meaningful connections to the characters. It’s no accident. Spend even a few hours in Ferelden, and the personalities shine through. Longtime fans will delight in revisiting the moments where their favorites met, while new and casual players will be surprised when dialogue choices go against trope types into something more substantive.

It’s not all talk, though. Dragon Age: Origins also boasts a unique combat system that is a rough blend of action hack-and-slash with turn-based tactics. A battle pause feature is the lynchpin of the system, allowing you to survey the field and make key decisions over targets and positions. It may seem gimmicky, but it absolutely works. The further into the game you get the more strategies you discover. Combat strategies hinge on balancing the abilities of each character in your party.

And this is where everything comes together. You might make decisions based on the chemistry you feel developing with a character. Do you need Alistair in the party since you’re already a human warrior? Morrigan hates everything you do, but she’s irresistible. Maybe try Zevran?

Or you might take a practical approach and focus solely on filling vital combat roles. There’s no shame in letting battle decide your fate, and a well-balanced team makes life easier during some of the extended combat encounters. Experimentation is crucial to both approaches.

Either way, you’ll be surprised. And that’s the real joy of Dragon Age: Origins. You’ll agonize over save-scumming for FOMO and plot new playthroughs. You’ll get lost in hours of story and combat again and again and again. It’s a must-play (again).