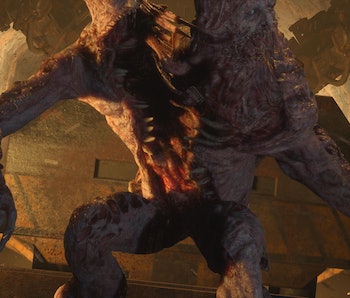 The first major skill check in The Callisto Protocol takes place during its sixth chapter, titled Below. This stage ends with a battle atop a moving platform, requiring you to fend off hordes of biophages, culminating in a fight against a monstrosity called the Two-Headed Brute. This boss is no joke, and can easily take you down in one hit, even on normal difficulty.

Thankfully, there’s an effective strategy you can use to get through this encounter consistently. It isn’t a cakewalk, but if you know what to do, this fight will go much more smoothly. Here’s how to defeat the first Two-Headed Brute in The Callisto Protocol.

Before you begin the encounter, we first recommend upgrading your GRP at the nearby store. If possible, try and have the recharge speed and energy upgrade to at least medium. Along with that, we advise having the high-capacity upgrade for the Riot Gun, which will come in handy while defeating the biophages that appear before the boss.

We also recommend upgrading your Stun Baton, as it’ll make the upcoming fight much easier. Upgrading to at least damage level 1 is ideal.

Keep in mind, there are four chests containing useful items on the moving platform, but you likely won’t have room for them all at first. The items that spawn are on a random rotation, meaning your fate is left somewhat up to RNG.

As a final tip, we advise stocking up on several GRP refills, which are typically found in the chests around you. These come in handy more than health injections, as you usually don’t have much time to heal anyway.

Once you’re ready, interact with the terminal to trigger the fight ahead.

Before dealing with the Two-Headed Brute, you first have to take on several waves of biophages. These typically spawn in sets of four, usually one at a time. The key is to use your GRP to toss these enemies off the platform or into the large fan at the other end. The nice thing is that the enemies spawn in the same spots each time, meaning you can be ready for them before they appear.

The next wave of enemies won’t spawn until you’ve defeated the previous, so use this to your advantage by leaving one creature alive. Then go around and stock up on items from the surrounding chests. It helps if you shoot the enemies in the legs to slow them down a little.

Eventually, you’ll run out of GRP energy, and once you do, swap over to the Riot Gun to finish off the remaining enemies. There should be four waves in total before the Brute spawns.

After you’ve defeated the fourth wave, the Brute will appear next to the terminal (opposite the large fan). The key is to damage the Brute with any ranged weapon while running around the stage in a circle. We recommend only shooting the boss when you’re far away, so you’ve got time to run and reload. Make sure to use the crates as cover and don’t get greedy with your shots.

Eventually, the Brute will go down temporarily. Run over to it, and bash it with your Stun Baton, and after the animation finishes, run away as quickly as you can. Repeat this process a handful of times, and the creature will eventually rip off its own head, allowing it to walk a little faster. Just as before, it’s important not to fire too many shots at once, as the Brute will catch up to you quickly and take you out in just one hit.

At this point, the strategy is the same: Damage it with your ranged weapon of choice, wait for it to go down, bash it with your Baton, and repeat. Do not make the mistake of trying to unload on the creature with your guns while it’s down — you’ll just waste ammo. Your melee weapon does way more damage than you’d expect.

This boss appears a couple more times throughout the duration of the game, but the strategy is the same.

The Callisto Protocol is available now for PS4, PS5, Xbox One, Xbox Series X|S, and PC.

More like this
Gaming
Jan. 25, 2023
Redfall is Bethesda’s vampire-infested co-op shooter — what to know
By Jess Reyes
Gaming
Feb. 3, 2023
The Best Gifts for All 35 Characters in Fire Emblem Engage
By Samuel Tolbert
Gaming
Jan. 28, 2023
How to complete all the Velvet Room requests in Persona 3 Portable
By Willa Rowe
LEARN SOMETHING NEW EVERY DAY.
Related Tags
Share: