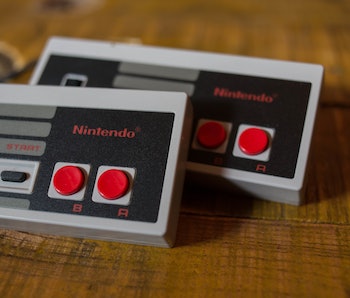 Excitebike marked the first time Shigeru Miyamoto and Toshihiko Nakago, two-thirds of the “Golden Triangle” that would later go on to make Super Mario and Zelda history, worked together. Like a rock star’s first band before moving on to the one that would make them famous, the game doesn’t have much of a role in Nintendo’s lore.

“At that time, I didn't even know that anyone by name of Miyamoto was working for the company. Then he came up to me and said: ‘We're going to be working on Excitebike together,’” Nakago once recalled in an interview.

But just because it’s been glossed over due to its more famous siblings doesn’t mean Excitebike isn’t a lot of fun. If you're a Switch Online subscriber, you can play the game right now for free by downloading the Nintendo Entertainment System app.

Excitebike was part of a broader evolution within motocross. In 1970, a Belgian racer named Joel Robert won the 250cc Motocross World Championship for the third year straight. He was already making history, but this time the bike he used was the one breaking barriers: it was built by Suzuki, a Japanese company.

For decades, motocross and racing had been seen as the domain of European and American companies (watch Ford vs. Ferrari for more). Suzuki, which had entered motorcycle racing a few years earlier, was the first Japanese company to win a motocross world championship at any engine class. It would not be the last.

“Suzuki offered me more money, but even more important to me was that I could see that they were very well organized,” Robert once said of their recruitment effort. Other Japanese companies, like Yamaha, Honda, and Kawasaki, were showing increasing interest in winning on an international level.

By 1978, Akira Watanabe, a Japanese racer also using a Suzuki, won the motocross world championship. By 1984, the top three finishers in the 500cc race were all using Japanese motorcycles. Capitalizing on the sport’s popularity, that same year Nintendo released Excitebike.

Excitebike measures speed not on miles or kilometers per hour, but rather on a technical problem with motorcycles: their engines overheat when pushed too hard. The driver has two choices: using A, which will keep the temperature and speed at a steady midway point, or B, which will push the engine to its limit, risking overheating.

The game lets you try this out on a time trial, and if you can pass that easy enough barrier it lets you in on the full action: a race against the computer’s seemingly endless competitors, while jumping over obstacles, avoiding dirt patches, and perhaps most difficult of all, avoiding the other races.

Racing has always been dangerous, but a look back at Suzuki's winning 1970 year. A promotional film made at the time shows a sport of collisions and chaos, which a narrator compares to “climbing Mount Everest” with winning akin to hitting the jackpot in a lottery.

Hard to say if that’s true or not, but it’s the feel Excitebike gives you when you play. There’s a chaos in the computer’s bikes, who will occasionally put themselves directly in harm’s way, which puts them in your way, which can lead to colossal entanglement which will have you racing back to your bike.

It’s never clear exactly how many opponents you have. Unlike modern racers, Excitebike only lets you know your placement after the race is over. There’s a time you need to beat to reach the podium, which qualifies you for the next time trial and then the next race. It’s a challenge, keeping the cycle balanced from the jumps and obstacles and other drivers.

But it’s easy enough to back into the race, keeping the game one you can keep coming back to over and over.

8-Bit week is an Inverse celebration of the classic — and forgotten — games that pushed the boundaries of interactive entertainment in the 1980s and beyond.