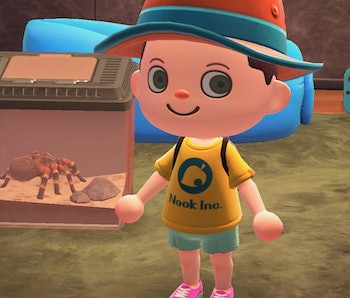 2020 has been one of the biggest years ever for video games, despite the many challenges within and beyond the industry itself. A number of groundbreaking titles kept gamers entertained, comforted, and distracted throughout a tough year.

To celebrate the biggest and best games of the year, Inverse polled more than 1,475 readers about 2020’s video game highlights. 36.7 percent of 1,173 respondents deemed Animal Crossing: New Horizons the most comforting quarantine game of 2020. But the divided results suggest that comfort and escapism have a broad variety of meanings to gamers.

Giving and receiving gifts from friendly neighbors on Animal Crossing: New Horizon’s tropical island is a pleasant experience. Spending lots of time beautifying the landscape and collecting fruit is easy and gratifying. But Call of Duty: Warzone’s battle royales offers a very different kind of respite from reality that’s much more action-packed and social. The cartoonish manhunts of Among Us, where 1-3 alien Imposters try to slowly kill off every Crewmate aboard a spaceship, offer yet another wildly different escape.

Here’s a closer look at the most popular three titles that comforted gamers in 2020.

Activision’s newest Call of Duty battle royale, Warzone, launched on March 11 to almost no fanfare even though it was leaked less than 36 hours before the actual launch. That same week, most of America entered a lockdown due to the coronavirus. Within two months, 60 million gamers had downloaded the free-to-play game. By October 2020, Activision revealed that the game had hit the 80 million-player milestone.

Whether you’re running the ridiculous helicopter strategy or taking things more seriously, intense Warzone matches reward efficient teamwork and skilled gunplay. Like the best battle royales out there, it also capitalizes on the concept of emergent narrative through which players bond in the trenches, so to speak. Win or lose, they construct a unique story together and potentially talk about it for months and years to come.

I remember catching up with three friends from high school around June who said they’d been playing together almost daily. “Thank god we’ve had Warzone to play during this pandemic,” one said. Call of Duty had transformed from a casual form of entertainment into a primary method of socialization. The real comfort isn’t in the gunplay; It’s in being able to hang out with your friends.

Like most games from the franchise, Call of Duty: Warzone is immensely popular for a lot of reasons, chief among them a remarkably high bar of overall quality, consistently fast-paced action, and high-resolution visuals. Warzone perfectly marries everything that makes the franchise work with the alchemy of a gripping battle royale to make for an engaging quarantine game that was released at the perfect time.

A charming roundup of highlights from AOC's time playing Among Us.

Even if you’ve never played Among Us, you’ve almost certainly heard of it, thanks to New York Congresswoman Alexandria Ocasio-Cortez’s groundbreaking October livestream that aimed to encourage voter turnout. The core concept and charming execution of Among Us is impossible to deny, even for people that prefer watching the game on Twitch over playing it.

Similar to the party games Mafia or Cry Wolf, each player is assigned the specific role of innocent Crewmate trying to repair a spaceship or a villainous Imposter seeking to eliminate everyone. Playing as the villain is a thrill considering the unique abilities you’re given, and part of what makes it such an addicting escape is the hoping you might be the Imposter with the start of each new match

Unlike most video games, Among Us puts a lot of emphasis on direct player-to-player communication. In between rounds — usually after a dead body has been discovered — players are given a limited amount of time to discuss theories and level accusations at other players. It’s therefore more of a socially competitive experience all about deception, teamwork, and betrayal. That’s really frustrating at times, but cute art and short match lengths make it palatable. And ultimately, it’s still about bringing people together.

Even if playing the game doesn’t interest you, watching it can be just as entertaining for all the same reasons, especially when AOC is playing.

When the Inverse games team discussed our favorite games of 2020, Animal Crossing was top of mind for many of us, so it’s no surprise that more than one-third of respondents found it to be the most comforting quarantine game.

Animal Crossing: New Horizons delivered wholesome vibes upon its March 20 release, a week after many places in America entered lockdown. Playing every night in bed and early every morning became a ritual for millions of people, myself included. Some players even held in-game weddings when their actual weddings were canceled.

Players spend their time collecting fruit, checking the island’s shop for new items, mining for ore, talking to neighbors, digging up fossils, and dabbling in the high-stakes Turnip Exchange. The stakes are low. The art style and music are beautiful and relaxing. It’s easy to relish in the opportunity to unplug from reality and step into a better, simpler world.

Animal Crossing: New Horizons’ timing was uncanny, and even though I more or less quit the game after making enough Bells from the Turnip Exchange to set me up for life, I will always treasure my time spent on the island called Avocadoso.