“The world has changed.” 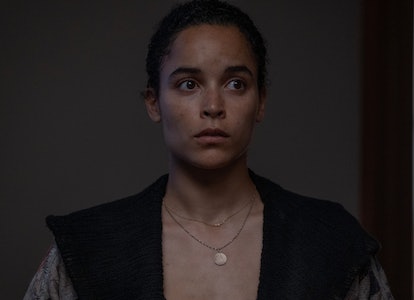 Despite being based on one of the most critically-acclaimed comic books ever written, FX’s Y: The Last Man was criminally short-lived. But with the time it had, it wasn’t afraid to push past hefty expectations and do something bold.

The show diverts from writer Brian K. Vaughn’s cult comic with a small decision that shakes up protagonist Yorick Brown’s journey and gives his girlfriend, Beth Deville, space to be her own individual. Rather than a long-distance phone call cut short, as it was in the comic, Yorick instead proposes to Beth over dinner in his apartment. Audiences cringe in real-time as Beth’s face spells everything before she says it. When Beth finally turns him down, our protagonist devolves into a man-child with still a lot of growing up left to do.

SCENE STEALERS is a countdown that salutes the unforgettable small-screen characters of the year. Beth Deville is #14.

But it also reveals Beth as someone who isn’t afraid of standing her ground. In a show loaded with emotionally complex situations, this one stands out in its siphoning of that secondhand embarrassment we’re all familiar with. And it reinforces Beth’s autonomy and boundaries in ways the original work never did. In showrunner Eliza Clarke’s television adaptation, Beth refuses to be an idealized dream girl.

Who is Beth Deville?

This is a far cry from the character in the comics, a specter who exists almost entirely in Yorick’s romanticized memories. In both versions of the story, Yorick’s proposal is impeccably timed to a cataclysmic plague that kills every creature on Earth with a Y-chromosome, save for him and his pet monkey Ampersand. In the comic, Yorick’s proposal is unanswered, and that uncertainty, coupled with delusional romantic aspirations, leads him across a tattered globe. The show’s choice to reveal Beth’s answer tears its characters’ walls down to expose their vulnerabilities and enables Beth a lot more to say this time around.

It’s an understated scene, but a fantastic one that's played with sincere emotional catharsis by actress Juliana Canfield. A graduate of Yale School of Drama, Canfield’s highest profile role is Jess Jordan, secretary to television’s most damaged stock-bro, Kendall Roy, on HBO’s Succession. Jess is an enigma; Canfield plays her with a deliberate distance from the audience that keeps her privy to the sleazy secrets of TV’s most dysfunctional dynasty, yet Succession viewers know nothing about her in return. It’s a tricky balancing act, and it’s one that Canfield walks with Beth in Y: The Last Man, a role that considerably retools a character who appears in only a fraction of the original comic’s 60 issues.

Without spoiling the must-read comic’s endgame (and potentially the TV series, should it find a new home), it’s a genuine shock when Beth reappears so soon in the first season. In the seventh episode, we find Beth seeking refuge at the White House. Shades of Canfield’s Succession role slip into Beth when she’s amongst a privately deteriorated government. But we soon learn Beth has a secret too, as a member of a radical anarchist group planning a violent insurrection.

“Beth refuses to be an idealized dream girl.”

In an adaptation that’s already taken risks by changing Beth’s race, the choice to also make her an insurrectionist may have confusing optics, considering the very real insurrection carried out by far-right agitators on January 6th. But the show contextualizes its revolutionaries like Beth as desperate people who have already seen the cracks in the pillars of American exceptionalism; these are polar opposites to the bitter alt-right who turned to violence when they found they couldn’t keep systems in their favor. Navigating life as a Black woman has already exposed Beth to the fundamental flaws in the foundation of our national structure; surviving the apocalypse was just the spark needed to light the fuse.

Beth’s radicalism is already a fascinating addition to the main storyline, and it’s one that could carry as a spin-off, narrowing its lens at what life has become for the people who aren’t sheltered politicians or mankind’s last hope. Beth is the perfect candidate to lead such a show, grappling with her own beliefs while witnessing a changing world. In a New York Comic-Con interview with Big Gold Belt Media, Canfield implied exactly this, saying “the world has crumbled, and everyone’s trying to hold on to some semblance of normalcy.” With the apocalypse rearing its head, why not push mankind to reinvent structures that haven’t worked in everyone’s favor?

Not only does the FX series transform Beth from a plot device into a fully-rounded character, but she’s someone who encapsulates the sociopolitical frustrations of this era. On both an intimate and grand scale, she refuses to be placed into a traditionalist framework. She’d sooner cut the rope than play tug of war, and she’s right at home in a show that asks big questions about the tenuous structures that make up our society.

Y: The Last Man is streaming now on FX on Hulu.