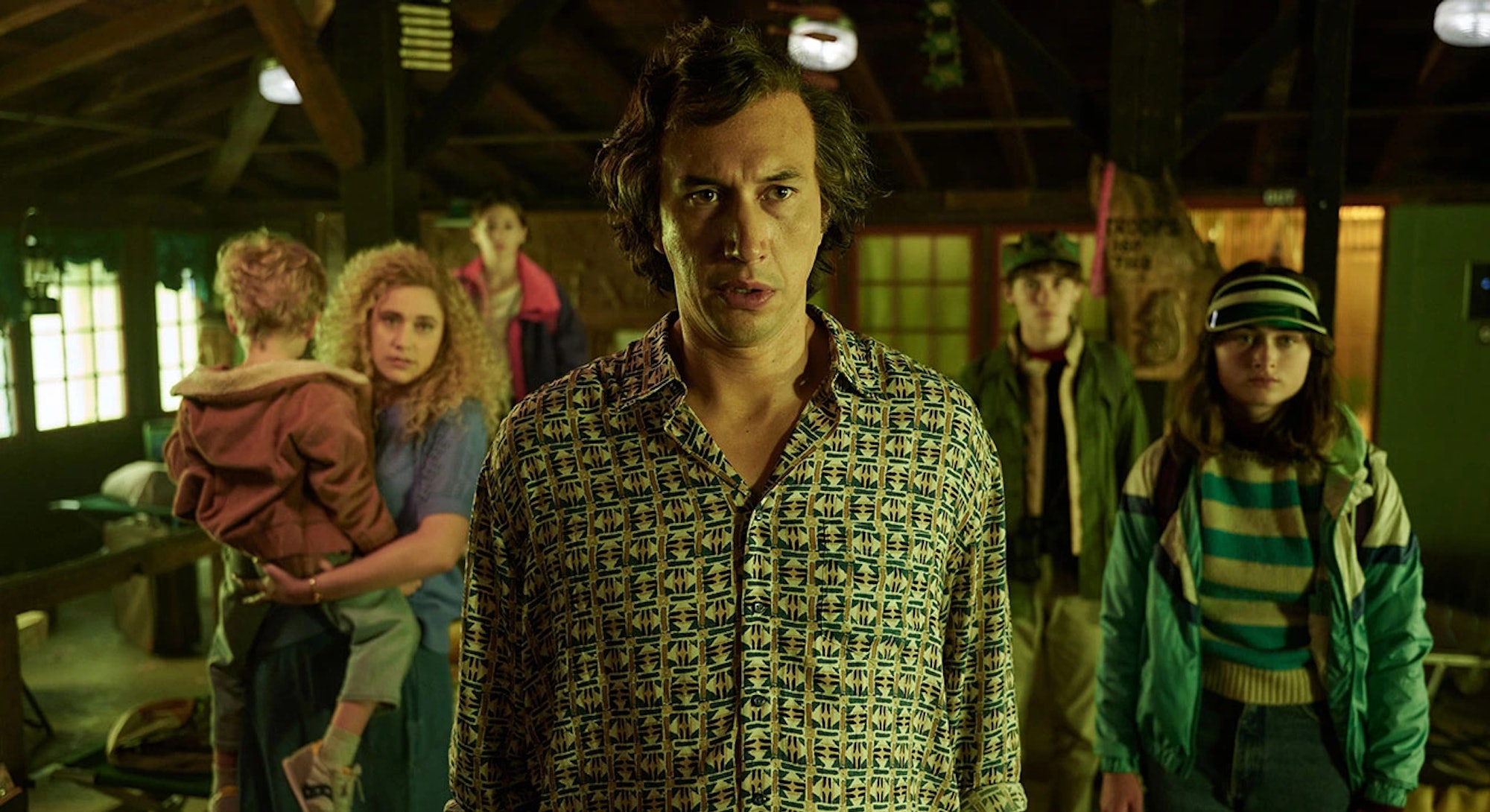 “Television does a lot of our predatory human research for us,” David Foster Wallace wrote in his 1993 essay on the impact of television and irony on U.S. culture. “American human beings are a slippery and protean bunch.”

His contemporary, Don DeLillo, also explored this notion in White Noise, a novel that guides us through a rag-tag family’s involvement in academic absurdism, narcotic intrigue, and what happens when the nuclear family is actually exposed to something nuclear. In both the 1985 novel and director Noah Baumbach’s new adaptation, White Noise explores how — or, more accurately, if — we can navigate a world in which Americans are kept culturally and pharmaceutically serene by a series of real and metaphorical medications, amid a constant onslaught of disaster, spectacle, and death.

Even for Baumbach, White Noise is dark, but it’s also one of his funniest movies in years and perhaps his best attempt yet to capture the essence of modern America.

Greta Gerwig and Adam Driver star as Babette and Jack Gladney, both each other’s fourth spouse. He is a pre-eminent scholar of Hitler Studies and Advanced Nazism at the local university. She is a corkscrew-curled teacher of posture at the local church. The Gladney brood typifies the cacophony of American life: their shared children include Denise (Raffey Cassidy), who reads medical journals for fun; the suspicious and sensitive Steffie; toddler Wilder; and Heinrich (Sam Nivola), a precocious teen who can reel off reams of information like a sentient search engine.

In their overlapping conversations laden with half-truths and folksy speculations, Jack tells us with a good deal of warmth: “The family is the cradle of the world’s misinformation.” But between chaotic mealtimes and communal television-watching (the preferred family choice is newsreels of plane crashes as opposed to sitcoms), it’s clear that Babette is hiding a secret from her husband and eagle-eyed daughter concerning an off-the-market medication known as Dylar. Naturally, before they can get to the bottom of it, the entire town is thrown into chaos as an “airborne toxic event” forces them to flee their homes.

A good deal of the film takes place in a chemically colorful supermarket — which we’re told is a “sacred place” full of “psychic data” — filmed in Rubix-cube primary colors by cinematographer Lol Crawley. The supermarket itself personifies the titular white noise Baumbach is exploring here, with endless consumer products and artificially lit aisles lending a plastic unreality to proceedings. Paired with a 35mm anamorphic lens and era-specific products, this visual time capsule is ripe for latent, tongue-in-cheek cultural analysis.

Perhaps this sort of high-concept plot seems ill-suited to hyper-naturalist Noah Baumbach, but his experience in unpicking and re-sewing the family unit in previous features like The Squid and the Whale and Marriage Story give the director an entry point into DeLillo’s occasionally distancing novel. While satirical, there’s no smarm here; Baumbach imbues a typical warmth and reality into his characters, whom you care about and actually want to succeed.

This is achieved, in part, thanks to the film’s pacing and patience; there’s no rush to take us to the next toxic explosion or big monologue, but a pleasing focus on characterization. In her first on-screen acting role in six years, Gerwig imbues a heft and pathos to her character who, in the hands of a less capable actor, might have come across as impenetrably kooky. Elsewhere, characters from “living icons” academic Murray Siskind (Don Cheadle) to eccentric drug dealer Mr. Gray (Lars Eidinger) instill a real sense of charisma and memorability to the film’s supporting cast.

A blend of orchestral and electronic music in Danny Elfman’s score represents this shifting approach to satire, irony, and empathy. We’re able to laugh at parodic dialogue paired with pointedly ‘80s sound cues, but also are moved by the film’s slower scenes, designed to draw out deep sentiment. A new song by LCD Soundsystem plays during the credits’ supermarket dance sequence — a surreal closing that manifests the infectious desire to move your body in response to the sounds, colors, and stimuli of your controlled environment.

Despite a clearly demarcated tri-pronged structure — “Waves and Radiation,” “The Airborne Toxic Event,” and “Dylarama” — some may criticize White Noise’s shifting tonal balances. The film has a habit of presenting the viewer with anachronistic scenes and then abandoning them for new ones. Some viewers may question why the central toxic event ends up being more of a MacGuffin than something the plot legitimately hinges upon.

But Nope is not the only movie from this year that has posited disaster as a somewhat uniquely American spectacle — or that comments on the way our brains are becoming increasingly hardwired to pick up and discard thoughts in the space of seconds. White Noise acutely understands how our prophylactic response to real or imagined disaster is in constant, inextricable conversation with shifting cultural structures designed to keep us dumb and drooling.

As “fragile creatures surrounded by hostile facts,” the Gladney clan could be any normal family forced to reckon with the plastic underbelly of suburban America, where domesticity naturally caves in to chaos. Baumbach has pulled off a skilled balancing game here: making us laugh at the nonsensical points of view eschewed in conversations between characters, while also letting us chew on the idea of our own agency and mortality in a world where we’re all doomed to die.

White Noise will hit theaters on November 25 and Netflix on December 30.