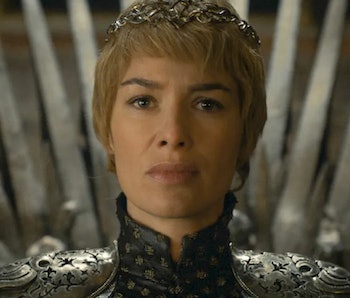 Everyone loves a good tarot card reading. Whether you actually believe in it or not, having someone pull out a handful of decorated cards and use them to figure out your future is a fun way to pass the time. But in White Lotus Season 2, a tarot card reading takes a turn for the worse — and brings to mind another mysterious HBO show.

In White Lotus Season 2 Episode 3, Tanya (Jennifer Coolidge) summons a local fortune teller to her Sicilian hotel room. Once the tarot cards are laid out, Tanya asks if her marriage will last. The fortune teller looks down and bluntly says no. Her marriage is doomed, and there may be another woman.

At this point, Tanya accuses her guest of being too “negative” and starts shouting at her. At the same time, the fortune teller sees something frightening in the cards. She tries to explain but only manages to say a few words in Sicilian before Tanya shoves her out the door.

So what did the fortune teller see? On Reddit, some fans have translated her prophecy, and it could spell doom for at least one character.

As one redditor explains, the fortune teller warns Tayna, “La pazza ti portera al suicidio,” which they say translates to, “The crazy woman will bring you to suicide.”

However, in an update to the post, they note that someone else thinks the fortune teller is actually saying “pazzia” not “pazza,” which would change the meaning to, “Madness will drive you to suicide.”

These two translations suggest two very different things. While there’s little doubt that Tanya is the “crazy woman” in this situation, the first version suggests that Tayna is going to push her assistant Portia (Haley Lu Richardson) off the deep end. The second translation would mean that Tayna herself is going to be the character who winds up dead at the end of White Lotus Season 2.

Either way, we probably haven’t heard the last of this prophecy. But as any Game of Thrones fan will tell you, TV prophecies have a way of letting you down.

White Lotus vs. Game of Thrones

Perhaps it’s a bit of a stretch to compare these two very different shows. Then again, they both occupied the same prestigious Sunday night time slot on HBO, and if White Lotus is wading into prophecies, then Game of Thrones is as good a place as any to turn.

Game of Thrones built its fandom on prophecies. The “Prince Who Was Promised” fueled endless speculation for eight long seasons. In the end, it barely seemed to matter. HBO’s prequel series House of the Dragon even resurrected the prophecy when it debuted earlier this year, turning it into a major plot point in the show’s central power struggle.

Of course, Tanya’s prophecy isn’t quite as pivotal to the plot as the ones that drove Game of Thrones. (Remember Cersei’s prophecy? That didn’t really pay off either.) White Lotus delivered her warning in a foreign language and didn’t even bother to offer subtitles. So while there’s a decent chance the series could pull a Game of Thrones and totally abandon this plotline, it might be worth keeping in mind just in case this HBO show does a better job of sticking to its prophecies.

The White Lotus Season 2 is streaming now on HBO and HBO Max.

More like this
Entertainment
Jan. 30, 2023
New House of the Dragon “making-of” book plunges into the fantasy hit’s creation
By Jeff Spry
Entertainment
3 hours ago
The Last of Us Episode 4 trailer teases the entrance of Melanie Lynskey’s character
By Claire Fox
Entertainment
Feb. 2, 2023
The DC Universe is Taking the HBO Approach With Its TV Shows
By Dais Johnston
LEARN SOMETHING NEW EVERY DAY.
Related Tags
Share: