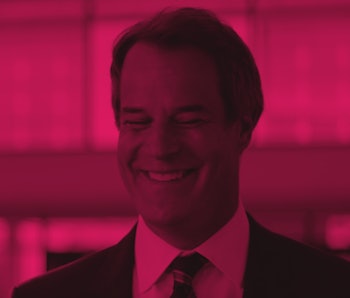 Who is Tyler Hayward in the Marvel universe? WandaVision Episode 4 introduces a new character in S.W.O.R.D.'s acting director, but can we trust him?

The Marvel Cinematic Universe has a long history of evil government officials who are secretly up to no good (remember Robert Redford as Alexander Pierce?). That alone is enough to set off alarms when Hayward (Josh Stamberg) strolls onscreen and does his best to charm Monica Rambeau (Teyonah Parris), but a deeper dive into the outskirts of the MCU could reveal even more evidence that Tyler Hayward is secretly evil. That's right, we're talking about Agents of S.H.I.E.L.D.

Who is Tyler Hayward in WandaVision?

Here's what we know about Tyler Hayward. At some point after Thanos' snap in Infinity War that disintegrated half the universe, he became the head of Sentient Weapons Observation and Response Department (SWORD) apparently just by being the last man standing. Under his guidance, the organization also shifted its focus away from sending humans into space and towards drones and other robots. They even changed the name of the department (in the comics, the "W" stands for "Worlds"), as revealed in this exposition dump:

Hayward: "Sentient weapons, like it says on the door."

Rambeau: "It also says observation and response on that door, not creation."

Beyond that, we know zilch about Hayward. He appears to be a totally new creation of the MCU not based on any comic book character. However, his origins may lie in a minor Marvel Studios TV villain...

In Agents of S.H.I.E.L.D., Brian Hayward was a super-soldier created by the Centipede Project, a program devoted to creating Captain America-style operatives funded and controlled by Hydra. Originally enlisting as a soldier in the U.S. Army and serving in Afghanistan, Hayward was recruited by Centipede and set up with the super-soldier serum along with a cybernetic X-ray eye and a special device that injected alien metal into his body for added strength. In other words, he's a Nazi super-soldier.

Brian Hayward was ordered to attack the S.H.I.E.L.D. team led by Phil Coulson. Eventually, he was captured by S.H.I.E.L.D. and killed. We also know he had a sister Laura, but there was no mention of a brother or any other relative named Tyler Hayward.

Of course, it's possible the names are just a coincidence, but since when does Marvel Studios believe in coincidence? We definitely wouldn't be surprised to learn that Tyler Hayward is related to Brian and out for revenge.

Then again, maybe something else is happening here. Hayward's buttery smooth introduction and the charm offensive he lays on Monica Rambeau might not be hiding his Hydra allegiance. They might actually be hiding his true identity as an alien Skrull.

Think about it. We know the shapeshifting Skrulls are already imitating other government leaders, including Nick Fury. And with a Secret Invasion show officially in the works for Disney+, the MCU needs to start planting those seeds. Who better than the head of S.W.O.R.D. to be a secret Skrull?

WandaVision is streaming now on Disney+.