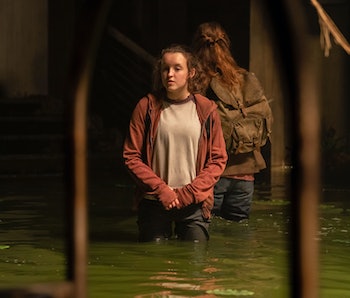 Prior to his blockbuster HBO series The Last of Us, Mazin wrote and produced Chernobyl, a grounded exploration of the 1986 disaster and its fallout. While the award-winning miniseries was a realistic drama and a sobering portrait of ineptitude, propaganda, and arrogance, a handful of standout moments mimicked the tonal and visual stylings of horror movies.

That energy is exhibited again in the Indonesia-set opening of The Last of Us’ second episode. The two shows share a common theme of humanity’s precarious existence and the crumbling bricks that make up civilization. Some filmmakers boast signature tones and wavelengths, and Chernobyl and The Last of Us prove that Mazin deserves recognition for his own.

Episode 2 of The Last of Us, “Infected,” brings audiences back to 2003. This time it’s to Jakarta, just before the show’s pandemic wreaks havoc. Dr. Ibu Ratna (Christina Hakim), a professor of mycology, is brought in by local police to inspect a strange new infection on a corpse. What she finds horrifies her. In the next scene, set in a nondescript office, Ratna is questioned, and offers grim answers.

“There is no medicine. There is no vaccine,” she says. She follows up with a blunt idea: “Start bombing. Bomb this city, and everyone in it.” When she kindly asks for a ride home, she says through tears, “I would like to be with my family.”

What fosters terror is how matter-of-fact Dr. Ratna’s “solution” is delivered, with the same gravity as your own doctor telling you to take two and call in the morning. The ramifications of Ratna’s tone is revealed later as we learn other countries did the same thing, leaving the world in the pathetic state it’s in now. It’s the obvious yet incomprehensible juxtaposition of the world changing on a dime, based on one person’s panicked instructions, that gives the scene a crushing weight.

Mazin also explored this type of grounded horror in the second episode of his other HBO drama. In “Please Remain Calm,” written by Mazin, three men volunteer to enter the flooded basement of the Chernobyl nuclear plant to open a sluice gate valve. Doing so can ensure the continuation of the overall clean-up effort and, despite laughable pay and unremarkable promotions as rewards, three brave souls volunteer, stirred by the noble cause of doing the right thing.

Predating the Clickers of The Last of Us, “Please Remain Calm” fades to the credits while engulfed in abyssal darkness. The three volunteers’ flashlights slowly lose power, while all we hear are their aimless footsteps in knee-deep water and the ominous clicking of their Geiger counters growing faster and faster, signaling their radioactive doom.

The Chernobyl episode still chills almost four years later. It’s terrifying not just because of its evocation of horror tropes, reminiscent of lost teenagers in the woods before the killer leaps from the bushes, but its unflinching portrait of a dreadful, all-too-possible reality. We could all die in darkness if we’re not careful.

Mazin is hardly the sole innovator of this style, but he’s maybe the best one doing it today. Despite some fundamental differences between the two scenes, their shared nihilistic tones, from the frankness of Ratna and the ruthless fade-out of Chernobyl, are chilling reminders of how close we always stand to the apocalypse.