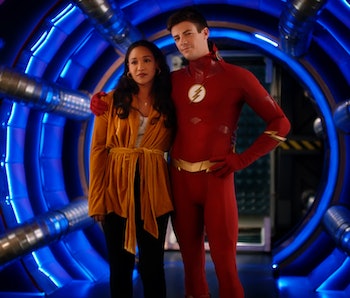 “You need to believe in the impossible.”

Eight years ago, the voice of Grant Gustin, speaking as Barry Allen, greeted audiences stepping into The Flash with a simple request: to suspend a modest level of disbelief.

To some degree, all superhero tales necessitate freeing oneself from notions of how things are supposed to work — like physics — so that stories where people fly and fire lasers can function. But what made The Flash on The CW incredible, at least for a time, is how it seized on the opportunity to let those impossible stories feel emotionally true. The Flash simply had the courtesy to ask first.

After nine seasons, The Flash is coming to an end. Its announcement came earlier this week, but it was inevitable if you know about the imminent sale of The CW and the one-year deals the show’s stars inked last year. The eighth season was written as though it were the last. Instead, The Flash will take a victory lap with an abbreviated ninth and final season of 13 more episodes.

The Flash also finds a miraculous way to end amid the larger turmoil at Discovery-owned Warner. The same week The Flash announced its end, the HBO Max movie Batgirl — a movie that finished filming and was undergoing post-production — was canceled outright. At $90 million, Batgirl is by far the heftiest sacrificial lamb in Hollywood as Warner reorients post-merger with Discovery.

The cancellation of Batgirl has little to do with The Flash, at least directly. But it does point to the ongoing erosion of DC’s superhero productions that, at modest budgets, cannot deliver the maximum returns studios now seek. Whereas Batgirl couldn’t guarantee the studio billions in return, The Flash, as a traditional episodic cable TV show, found itself out of pace in streaming. But that doesn’t mean its creative merits should be overlooked.

(It’s also worth noting that the 2023 film The Flash began development a year after the show hit The CW. That movie is so close to the finish line, albeit not with its own problems in the form of troubled lead Ezra Miller. That Batgirl was canceled without any controversy to speak of, and Miller-led The Flash is still opening in theaters when its star has left a trail of destruction like they’re the Reverse-Flash, is some next-level corporate mismanagement.)

The Flash began life as an Arrow spinoff, which rightfully deserves credit for launching what was once the shared universe of TV superheroes (popularly coined the “Arrowverse”). Premiering in 2012, Arrow brazenly siphoned the vision of Christopher Nolan’s grounded Batman trilogy. Series executive producer Andrew Kreisberg alluded to Nolan’s films during its summer pre-premiere press tour. Arrow star Stephen Amell said later in 2018 that the pilot director, David Nutter, had hung photos from The Dark Knight in his office. “That was his inspiration for the first season,” Amell said at a London convention.

When The Flash spun from Arrow in 2014, superheroes in most non-comics media were in a paradigm shift. Marvel’s broad action-comedy tones still felt fresh and the exception to the rule, despite box office dominance in the likes of The Avengers and Guardians of the Galaxy.

When The Flash aired in Fall 2014, it felt like a shock to the system. While it still opened with morose tragedy, involving the protagonist’s dead mother and wrongfully-jailed father, it had plenty else to offer. Each episode in its first few seasons was a paradox of classic comic book nonsense, modern humor, and melodrama. Smack dab in the 2010s, it was fundamentally millennial too, with coffee shops and blogging central to its ensemble of twentysomething characters.

Grant Gustin, who starred in the teen musical soap Glee, suited up as title hero. His natural boyish looks, combined with the character’s haunted backstory and aww-shucks gait, stood out from the brawnier, older heroes that populated Marvel. True to the Flash’s powerset, he was leaner and more limber than any Avenger. In a rare moment when there wasn’t an onscreen Spider-Man, Gustin was more than a reliable hand in the interim. “Lightning gave me abs?” is one of his more memorable early lines in the show.

But Gustin alone didn’t define the series. In a rare instance of superheroes powered by a real support system (like in the excellent Ms. Marvel), Barry had his adopted family, led by patriarch Joe West (Jesse Martin) who has undoubtedly been a father figure to a generation of TV viewers. While his upbringing with his eventual love interest and later wife, Iris West (Candice Patton) is dangerously close to Game of Thrones levels of icky, Iris was simply easy to fall in love with. Throw in a gaggle of lovable misfits like Cisco (Carlos Valdez) and Caitlin (Danielle Panabaker), both eventually obtaining powers of their own, and The Flash simply didn’t ever feel like a solo superhero show.

The Flash wasn’t the namesake of the Arrowverse, but it was the bedrock for the franchise for years. The CW series offered perhaps the purest superhero narrative with all the tropes and familiar ingredients the genre demands but with a fresh and modern spin so as to not feel stale. While sci-fi spinoff Legends of Tomorrow aimed for the rafters with scripts that felt written by bumps of coke, and Supergirl presented a superhero for the girlboss era, The Flash felt like an authentic adaptation of the Silver Age for the smartphone age.

As good as The Flash was, it wasn’t always a winner, and as its story continued it started to feel less like a journey and more like a treadmill. You’d be hard-pressed to find anyone who stuck with it to the end. (The most recent season had the lowest viewership in its history.) Likely because of a pre-existing deal with The CW and Netflix, the audience The Flash intended found it easier to just wait for seasons to drop on the service just weeks after the finale airs. Ironically, streaming became the best way to watch The Flash.

But The Flash wasn’t made for streaming, not really. It was a weekly episodic with 20-something episode seasons. Streaming’s structure of serialized chapters — essentially elongated movies — became the norm during Flash’s, ahem, run, especially for shows it was in direct competition. Shows like The Boys and whatever Marvel puts on Disney+ are now the baseline expectation.

For all of its speed, The Flash simply couldn’t keep up, not on the foundations it was established. But check out those first few seasons again (especially the Zoom and Savitar arcs) or revisit them if it’s been a while. The Flash may not be the high-fidelity blockbuster audiences demand these days, but it still might surprise you. You just need to believe in the impossible.

More like this
Entertainment
Sep. 20, 2022
Constantine 2 signals new life for DC movies — but at what cost?
By Eric Francisco
Entertainment
Sep. 24, 2022
The MCU’s Ironheart will improve on the comics in one pivotal way
By Richard Newby
Entertainment
Sep. 16, 2022
Adria Arjona isn't in Good Omens Season 2, but she's down for more Morbius
By Dais Johnston
Related Tags
Share: