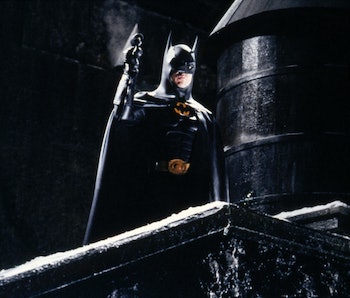 The dark knight is coming to the world of The Flash. In a recent Instagram post, the upcoming film’s director, Andy Muschietti, shared a close-up look at Michael Keaton’s Batsuit, which the actor will once again don for the 2022 blockbuster.

And if fans know where to look, Muschietti appears to be hinting at exactly what story will play out when the Scarlet Speedster finally hits the big screen for his standalone adventure.

What Happened? — On June 3, Muschietti shared a photo of Michael Keaton’s Batman costume; it’s currently unclear whether this Batsuit is the same one Keaton wore in Tim Burton’s 1989 Batman, or a replica made for The Flash. However, it’s certainly channeling the same vibe as Keaton’s old costume with its iconic black-and-yellow bat symbol.

It’s also worth pointing out the costume seems to be made out of harder material, indicating Batman has upgraded the armor in his later years, which the character has been known to do in the comics.

What will grab people’s attention, however, is off in the photo’s left corner. Smeared on the iconic Batman emblem is a blood splatter, which is not only an indication that the Batman appearing in The Flash is far from the hero late ‘80s audiences came to love, but also an homage to a specific comic-book storyline that could hold the key to The Flash.

The Button — A yellow symbol smeared with blood instantly recalls another iconic image from comics: that of a bloodied smiley face in Alan Moore’s Watchmen. Though published by DC Comics, that classic graphic novel was set in its own universe, entirely away from the worlds of Batman and Superman. Instead, Watchmen took place in a universe that closely resembled our own, save for the existence of one superhuman — Dr. Manhattan — and a generation of morally broken street vigilantes.

In 2016, DC Comics began to bring Watchmen into play with its other titles. In a publishing effort titled “Rebirth,” the DC Universe relaunched its comic book catalog with one big continuity reset: Watchmen was now canon.

At the end of DC Universe: Rebirth #1, Batman discovered in the Batcave a strange relic: the bloodied smiley-face button worn by the Comedian in Watchmen. This kicked off a long, strange road to the 2018 crossover series Doomsday Clock, in which characters from the DC Universe and Watchmen met for the first time.

One of the most important bricks in the road to Doomsday Clock was a 2018 crossover story titled “The Button.” Published in the pages of comic lines Batman, then written by Tom King, and The Flash, written by Joshua Williamson, both superheroes started investigating the origins of that bloodied button. The events of the story brought Batman and The Flash back into the events of Flashpoint, the 2011 crossover that set up a previous DC reboot, the New 52. (Head spinning yet? Welcome to comics.)

So where does Michael Keaton fit? — It’s important to know that, in both Flashpoint and “The Button,” The Flash met a Batman who wasn’t Bruce Wayne. In the alternate timeline known as “Flashpoint,” Bruce Wayne is gunned down by Joe Chill, which sets up his father to become a superhero vigilante. Unlike Bruce, Thomas is more world-weary and jaded. As Batman, Thomas Wayne uses firearms and is often seen drinking out of a flask he keeps in his utility belt.

Thomas Wayne played a big role in both Flashpoint and “The Button,” and it seems that the 2022 film The Flash is adopting elements from both comic-book crossovers into its story. While we can potentially rule out seeing the world of Watchmen in The Flash, we can safely say that Michael Keaton’s Batman is functioning in a similar role to the one Thomas Wayne played in the comics.

What’s key here is the multiverse DC is laying out for its feature films, including The Flash. Capable of racing between different realities, The Flash (Ezra Miller) is expected to encounter Michael Keaton’s Batman — who inhabits the parallel Earth known as Earth-89 — while maintaining contact with Ben Affleck’s Batman, with whom he’s become familiar on Earth-1.

The Inverse Analysis — No matter what actually happens in The Flash, fans are in for a treat as callbacks to DC Comics’ film history play out on the big screen. A multiverse-spanning experiment like The Flash has never been pulled off before in pop-culture history — at least not with the size, scale, and visibility of a superhero blockbuster.

The last ambitious superhero movie to do something like this was Avengers: Endgame, which sent characters back through the events of previous Marvel films, but even the Marvel Cinematic Universe has yet to fully explore its multiverse. Still, with Spider-Man: No Way Home out later this year and Doctor Strange in the Multiverse of Madness arriving in 2022, soon no superhero universe will ever be the same.

The Flash will be released in theaters on November 4, 2022.