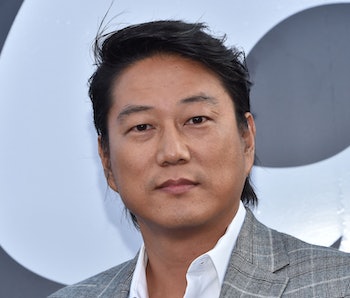 Sung Kang is living the dream — his version of it, at least.

“My American dream was not to be invisible,” the 49-year-old Korean-American star of the Fast & Furious films tells Inverse. And these days, he gets approached by people, and especially by kids, who recognize him as “Han,” the cool-as-ice drift racer from Dominic Toretto’s crew.

“If they’re coming up to me during dinner with my family, sure, it gets annoying,” says Kang. “But this is the time for me to ride this. I’m using Han to change [things]. Han represents this amazing shift of how people see Asian American males.”

Raised by a working-class family with a Black stepfather, Kang describes his upbringing in the American south as third-class citizenship. “It didn’t matter what we said,” he remembers of the way his family was treated. “We were just in the way.”

And yet this mistreatment lit a fire under Kang. “I knew we could change that,” he says, whether that meant seeking political office, playing sports, or being an actor. “That was my American dream: to show that we are three-dimensional people.”

Since returning to the Fast & Furious saga in this year’s F9, Kang has been shifting gears. In March, he was cast in the Star Wars series Obi-Wan, streaming on Disney+ in 2022. Kang has been told to keep details of his role under key, and he abides by that while promoting his latest film, crime drama Snakehead. Still, rumors swirl he may play a Jedi.

Whether or not he’ll wield a lightsaber, starring in Star Wars will be a major moment for Kang, who grew up swinging around paper towel rolls to simulate those Jedi weapons. “It’s fucking awesome on every level,” Kang says. “I remember being a kid like, ‘How do you get into that? How do you become Luke Skywalker?’”

Kang’s road to Star Wars was trickier than just training with Yoda. While enrolled at UC Riverside, Kang chose to pursue acting over law school, much to the dismay of his parents. “My mom was a housekeeper,” he says. “Being an actor in Hollywood was not a discussion at our dinner table. Our discussions were about survival.”

When he started out, Kang’s chances seemed dismal. An Asian American actor who didn’t know martial arts, Kang also radiated a certain nonchalance that Hollywood mostly rewards in white actors. “There were no opportunities,” he says. “Surviving as an actor is virtually impossible. You might get a commercial. But [to] actually use everything you learned, from school and books from all the greats you aspire to be, I realized it was not going to happen.”

Kang became “depressed and insecure” about his prospects — until Justin Lin’s 2002 film Better Luck Tomorrow came along. Loosely inspired by the 1992 murder of Stuart Tay, the film follows a group of high school overachievers who run a petty crime ring. The film marked Kang’s first performance as Han, a chain-smoking bad boy with a driver’s license. When Lin graduated to blockbusters, he brought with him Han — and Sung Kang — to Fast & Furious, where Han grew into a bona fide fan favorite.

Better Luck Tomorrow was one of the first indie movies of the millennium about Asian Americans that had been made by Asian Americans. The film showed Kang one way change can still happen in an industry resistant to it.

“If there aren’t writers and decision-makers from our community within the system, the world doesn’t change,” Kang says. “[Better Luck Tomorrow] put me in a leading man category in Hollywood that never existed.”

In Snakehead, Kang once again plays it cool. The first narrative feature from director Evan Jackson Leong (behind the Jeremy Lin documentary Linsanity), Snakehead is inspired by the real-life story of Sister Ping, who from 1984 to 2000 smuggled thousands of Chinese people into the U.S. where they worked to pay off Ping’s exorbitant fees. The term “snakehead” is translated from Chinese and refers to a human trafficker.

Kang learned about Sister Ping while shooting on location in New York, where the film’s crew was in contact with people who knew her. “She [was] a community leader,” says Kang. “People came to her for help. They relied on her.”

But Sister Ping’s legacy is fraught, given that she was a trafficker who used intimidation tactics to collect her fee whenever necessary. “I didn’t grow up hearing about her,” says the actor. “All the history [I learned] was from people that met her.”

Snakehead is driven by its characters’ pursuit of the American dream. Kang is adamant about choosing projects that reflect the same striving toward that personal ideal he’s done throughout his career. “Opportunities I’ve gotten somehow worked out,” he says, and that’s all the proof he needs the American dream is real.

Kang knows America is rife with problems; he currently participates in #StopAsianHate activism to push back against anti-Asian hate crimes, which spiked this past year. But “a kid like me can dream, and [it] can actually happen,” he says.

After all, he’s in Star Wars now. He’ll never be invisible again.

“Being on the set of Obi-Wan and in the Star Wars world, you’ve got to pinch yourself,” he says. “How did some kid from Georgia end up here?”

Snakehead will be released in theaters and in Digital and On Demand on October 29.