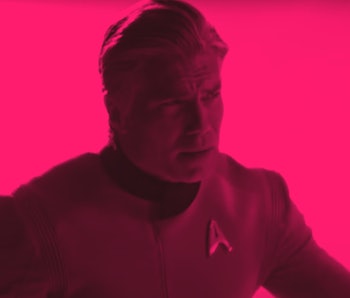 Will a very old mystery about Mr. Spock finally be solved in Star Trek: Strange New Worlds? With CBS All-Access set to relaunch as Paramount+ in March, a new trailer has given us the first new glimpse of Captain Pike (Anson Mount) and Mr. Spock (Ethan Peck) in almost two years.

The last time we saw these two iconic characters was in Discovery Season 2 and various Short Treks, both of which aired back in 2019. But with Strange New Worlds coming to Paramount+ at some point in the very new future, it's time to start asking the biggest question about Spock.

Will he go through Pon Farr? And if so, how will Strange New Worlds reconcile that with the classic Star Trek: The Original Series episode "Amok Time?"

We don't actually know yet when Star Trek: Strange New Worlds will hit Paramount+, but the presence of Pike and Spock in the new Paramount+ ad (narrated by Patrick Stewart!) seems to indicate this particular Trek series could be coming sooner rather than later. Although Discovery Season 4 is already filming, and Picard Season 2 is in pre-production, Spock and Pike striding up the mountain amount along with Dora the Explorer and the Paw Patrol pups, clearly indicates that this specific iteration of new-Star Trek is going to be front-and-center on Paramount+.

From the point of view of mainstream appeal, Spock and Pike rocking the old-school-styled Starfleet uniforms makes a certain amount of sense. Even if you're behind on new Trek, you know who these guys are.

Because Strange New Worlds will likely begin sometime in the year 2258 or even 2259, that puts it 6-7 years before the canonical beginning of Kirk's 5-Year-Mission in 2265. In the year 2267, in the TOS episode "Amok Time," Spock enters the Vulcan "Pon Farr," which we're told is the Vulcan mating-cyle that happens every 7 years. Assuming we're talking about human years and not Vulcan years (which seems likely) then that means Spock will, in theory, undergo, Ponn Farr sometime in the year 2260, but maybe on the cusp of the year 2259, depending on what time of year "Amok Time" took place.

The means that hypothetically, Spock could enter Pon Farr in Season 1 of Strange New Worlds! (Especially if the series starts in 2259.)

So far, the canon of Star Trek: Discovery and Short Treks has gone out of its way to make sure certain things match-up with the existing Prime Universe canon from Star Trek: The Original Series. Yes, certain superficial things (like crappy special effects) are slightly less explicable, but in terms of the broad strokes of the characters' stories, the DISCO-era versions of Spock, Pike, and Number One all are designed to match-up with what we saw in the '60s.

It seems unlikely that Strange New Worlds will contradict TOS outright, but if the writers (and producer Akiva Goldsman) want to revisit Spock's Pon Farr and explain why nobody in Starfleet seemed to know about the 7-year Vulcan Mating cycle before "Amok Time," then Strange New Worlds is in a unique position to address that plothole.

As evidenced by Star Trek: Enterprise, some members of Starfleet were aware of Pon Farr in the 2150s, roughly a century before the events of Strange New Worlds or The Original Series. In "Amok Time," Spock also says that he had hoped that his half-human heritage would "spare" him the madness of Pon Farr which could indicate that even in 2260, he didn't have to deal with it.

The Search For Spock, vaguely contradictions this, since we see a regenerated-teenage Spock going through Pon Farr, implying that yes, Spock probably had gone through his mating cycle at least once before the events of "Amok Time." (And likey even once before the forthcoming events of Strange New Worlds.)

How will Strange New Worlds approach the prospect of Spock-in-heat? Well, it's possible they'll ignore it altogether, and allow fans to figure out an off-screen explanation for the apparent discrepancy. Or, the writing team of Strange New Worlds will tackle the problem directly, and give fans everywhere a new episode in which Captain Pike and the crew have to secretly help Spock deal with the most private aspect of his life.

If Pike does know about Pon Farr and helps Spock keep it a secret, it could go along way toward explaining Spock's extreme loyalty to Pike, well after the command of the USS Enterprise passes to someone named James T. Kirk.

Strange New Worlds is expected to hit Paramount+ in either 2021 or early 2022.